Can You Eat Cichlids? (All You Need to Know) 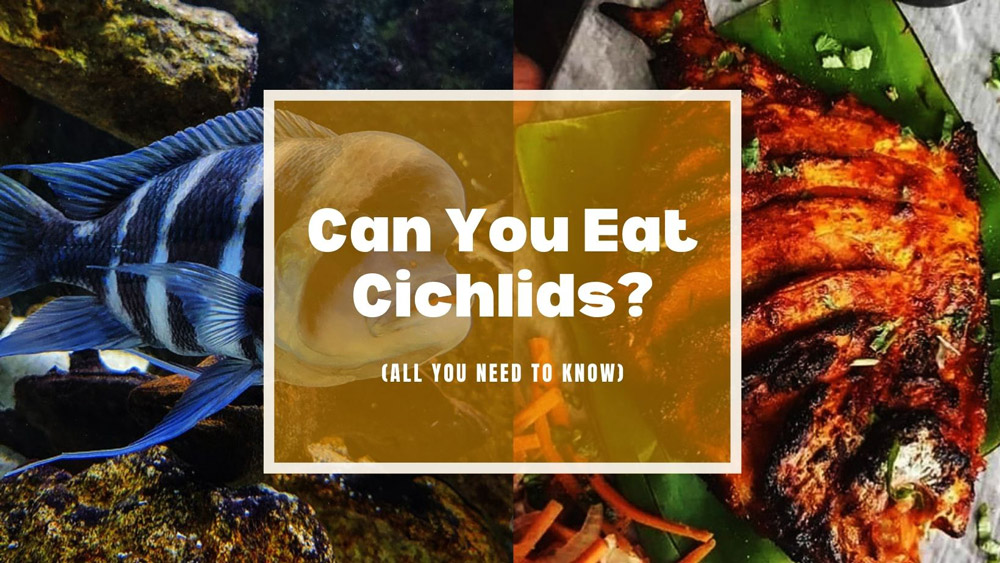 Cichlids are a large and diverse family of fish that includes some of the most colorful and fascinating creatures in the animal kingdom. From the bright-colored Mbunas to the most personality-driven Oscar, these fish are a feast for the eyes.

Sure, they’re absolutely stunning to look at. But we think some of them are actually still pretty underrated.

The main reason for this is that a few of them are also known for being pretty tasty!

While most people don’t consider cichlids to be a culinary delicacy, maybe you’re wondering who could ever want to eat a beauty like Discus Fish or Frontosa swimming around in an aquarium?

In many parts of the world, including Africa and South America, some cichlids are considered food fishes.

Can You Eat Cichlids?

In addition to being the most attractive fish in the aquarium community, many large cichlids that reach at least a foot in length are important food sources in the native range. One of the most well-known edible cichlids is tilapia (Oreochromis), a large genus of prolific species native to northern Africa and the Middle East.

Tilapia can be found in restaurant menus and home kitchens around the world. Thanks to its mild flavor and firm texture, this cichlid is a versatile fish that can be cooked in a variety of ways.

In addition to the favored tilapia, here are some popular cichlids that are considered to be food fish locally.

Peacock bass, or the genus Cichla, is a group of large predatory cichlids native to the Amazon and Orinoco basins in tropical South America. There are currently 15 described species in this genus, and one of them, the speckled peacock bass (C. temensis), can reach up to 1 m (3.3 ft) in length. The others are smaller and found in the aquarium trade, but they still require a very large tank. The most well-known is the Kelberi Peacock Bass (C. Kelberi).

Peacock bass is one of the world’s greatest freshwater sportfish, especially the butterfly peacock bass (C. ocellaris) and speckled peacock bass (C. temensis), which have been introduced to Florida for years, but there are bag limits. Their flesh is white and sweet with very little fat, making them have a similar taste and texture to the grouper.

As its common name suggests, this fish gets its name because of the attractive markings around its face that resemble the native macaws. In the wild, they inhabit slow-moving shallow rivers. In the aquarium, they are hardy fish but are not suitable for community tanks because of their large size and predatory nature.

Oscar fish, the most sought-after South American cichlid in the aquarium community, is known for its unique personality and extraordinary intelligence. These fish are mainly found in the Amazon River basin, where they prefer slow-moving white water with lots of rocks and submerged branches.

The Oscar fish is a fast-growing large fish; they can grow 1.5 -2 inches a month until they reach about 9 inches, then the growth rate slows down a lot. It’s common for Oscar hits their average full size of 12 – 14 inches in a year.

In the wild, some specimens can grow up to 18 inches (45 cm). Therefore, they are often sold as food fish in the local markets. Want to know about the taste? Check out this vid.

Native to the Atlantic slope of Central and South America, the Mayan cichlid (Mayaheros urophthalmus) is one of the well-known exotic freshwater species. In their natural habits, these fish live in various habitats, including marshes, mangrove swamps, lakes, rivers, and rocky shorelines.

Like most New World Cichlids (South or Central American Cichlids), Mayan cichlids are very adaptable and can tolerate a wide range of water conditions. They can reach a maximum length of 15.5 (39.4 cm) in the wild. In its native range, this fish is an important food source for local people.

Check out Robert’s video about cooking Mayan cichlids to see if they were worth eating. What’s more, there are no size or bag limits so that you can keep a few for dinner.

We continue our list with another large Central American predator – the Jaguar Cichlid. These fish live in turbid, warm, and low oxygenated bodies of water with muddy bottoms in Honduras and Costa Rica.

In the aquarium, this species is known for becoming more and more beautiful and aggressive as they grow larger. The most captivating feature of this fish is its “Jaguar” patterning when it fully matured.

In the wild, Jaguar Cichlids are some of the largest CA cichlids and can grow to a maximum length of 24″ (63 cm) and tip the scales at as much as 3.5 pounds. They are also sold as food fish locally.

The Triangle cichlid(Uaru amphiacanthoides) is also an important food source in its native Amazon River basin, where they’re found in clear water streams with submerged branches or roots. It is also a popular aquarium fish because of its beautiful color pattern and peaceful nature.

The average Triangle cichlid size is around 10-12 inches in length when in captivity. In the wild, these fish can reach 14 inches.

Over 250 described species of cichlid are endemic to the Lake Tanganyika, including the Emperor Cichlid (Boulengerochromis microlepis) that can reach up to 3 feet (90 cm), making it the largest extant species of cichlid in the world.

In the wild, adult Emperor Cichlids are chiefly piscivorous, feeding on smaller fishes, invertebrates, and mollusks, but juveniles are omnivores; they spend most of the time grazing some algae and organic detritus on the surface of rocks.

It’s the only species of its genus and is sold as a food fish around Lake Tanganyika.

Also known as front cichlid and frontosa, the Frontosa Cichlid hails from the north of Lake Tanganyika. The species name frontosa comes from the Latin word for “multiple foreheads,” which refers to the fish’s large nuchal hump that is especially pronounced in adult males.

Reaching up to 13 inches (33 cm) in length, frontosas are one of the largest cichlids in the world and are a popular food fish in their native range.

We round off our list with Pearlspot cichlid (Etroplus suratensis), also known as green chromide, one of the few cichlids from India. In their natural habits, these fish inhabit brackish water lakes, lagoons, and backwaters along the Indian coast, where they swim among mangrove roots.

The Pearlspot cichlid is a popular aquarium fish because of its beautiful coloration and peaceful nature. These fish can grow to a length of 12 inches (30 cm) and are a popular food fish in India and Sri Lanka.

The Case for Not Eating Cichlids

That being said, many large Cichlids are edible locally, as most freshwater fish are. However, most Cichlids are farmed for aquarium trade on a commercial scale – except for tilapia.

They are pet fish, often given names, and considered part of the family by many people around the world. The thought of eating a fish that shares your home might not sit well with some folks, and you’d likely face a huge pang of guilt.

There are also plenty of considerations to take into account.

First, consider the taste. Many people who have eaten cichlids say they taste like grouper. Personally, I don’t like to use analogies when it comes to taste, which will detract from the actual flavor of the fish. Suffice to say, if there is really such a Cichlid as delicious as tilapia, then you have eaten a lot of them.

Most cichlids in the aquarium are on the smaller side, even though they can grow large in the wild, which is not ideal if you’re looking for a meal.

If taste and size don’t bother you, here’s a more selfish reason not to eat cichlids from your tank: most of the chemicals used in aquariums are not FDA approved for human consumption, and many are linked to cancer.

There is also the risk of contracting diseases from eating wild-caught cichlids. These fish can carry parasites that are harmful to humans.

In addition, it’s worth noting that most cichlids are hormone-treated for the best colors before they are sold, which is something you might want to avoid.

So, unless you know for certain that the Cichlids you’re eating are safe and have been raised in clean water conditions, it’s probably best to stick to tilapia and other farmed fish if you’re looking for a meal.

If you have any advice on the matter, please share them in the comments below!