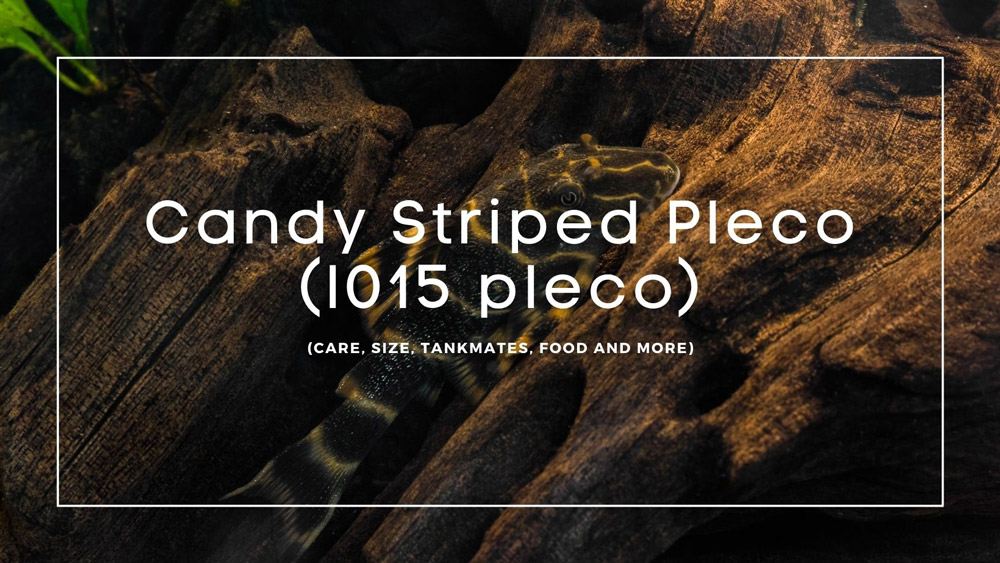 The candy striped pleco (l015 pleco) is a lovely little Peckoltia that can be found in aquariums all over the world. It has an attractive coloration and personality to match!

But there’s a lot to like when it comes to this species. For starters, these little guys are not only quite striking visually; their requirement is also straightforward!

They spend their time swimming across the bottom, looking for food, and gel well with other tank mates.

If you are interested to know more, read our candy striped pleco care guide before going to the store.

The candy striped pleco, also known as l015 pleco, goes by the scientific name of Peckoltia vittala and comes from the middle and lower Amazon basin in South America, including the Rio Xingu near Moz Port.

As one of the Xingu representatives in the hobby, also called Xingu-Peckoltia, the L15 is a bottom feeder and will be rarely seen near the surface.

Although this fish seems a little drab than its sister species L134 (leopard frog pleco), it is still an excellent alternative for the pleco enthusiast.

They don’t grow very large, with both the male and female fish reaching a maximum length of 5.5 inches or 14 cm. Inside home aquariums, their length usually varies between 8 and 10 cm due to the limited tank size and other external factors.

Candy striped plecos can live up to a decade or more with proper care and attention to detail. While their lifespan may be shorter in the wild, these fish can live happy lives in most homes, provided you ensure that the tank resembles their natural environment closely.

Due to their striped appearance, many people confuse candy striped plecos with clown plecos, but in reality, they are a subspecies of the dwarf pleco. That’s why their stripes are cream-colored, covering their body and tail in regular patterns.

However, the shapes become irregular near the front of the head while the belly is usually dark brown or sandy beige. The environmental conditions influence the fish’s mood, which gives them their color; remember that happy fish are dark brown.

Unlike other creatures in the animal world, the male l015 pleco looks smaller than the female because their body becomes narrow after the pectoral fin. However, the primary distinguishing factor between genders is the presence of tentacles, called odontodes, along the rear body and main pectoral fin.

The females don’t have odontodes (that look like small teeth), so try to spot these differences from above. Other than that, the striped pattern and colorations are the same for both genders.

Candy striped plecos need sufficient room to grow and swim despite their smaller size. Since they are accustomed to living in the Amazon River, a 20-gallon tank should be a minimum requirement to keep them healthy.

Not to mention, it will provide enough space to keep tank mates and decorate the aquarium, just like their natural habitat. Also, as they are bottom-dwellers, the base of the tank should measure at least 12×12 inches.

After choosing a suitable tank, it is crucial to maintain optimum water conditions for the fish to survive. Although they can adjust to various conditions, the water should be acidic with a pH value between 5.6 and 7, resembling the Amazon basin.

Other than that, the temperature should hover between 73 and 79 degrees Fahrenheit while the water hardness (dH value) must be around 2-20. These are essential factors to ensure that the fish can thrive inside the tank.

For the substrate, it would be best to fill the tank with rocks, pebbles, crevices, and other structures that resemble the water bed. Candy striped plecos are bottom-dwellers that hunt for food and plants on the river bed while also using the rocks as shelter.

You can even make tiny caves that may serve as useful hiding spots for females during mating seasons. Additionally, wood tangles or driftwood will help the fish feed and improve circulation.

They are omnivorous but tend to prefer meat over plant matter, such as algae; however, since they are nocturnal feeders, remember to add the food before lights out. You can include a diet of bloodworms and brine shrimp(BBS)because they are rich in protein and vitamins.

Other than that, chopped-up Mysis shrimp, catfish pellets, and vegetables like lettuce, cucumber, or spinach are a favorite. In some cases, you can add live food to tempt a shy fish to come out and eat. They will take leftover behind by tank mates, as well as softwood.

Some people think that these breezy creatures are algae eaters, but they’re not. They eat very little algae. If you want an effective algae eater, go for otos. These fish will not damage your live plants if fed well.

We found that candy striped plecos are docile and peaceful by nature if they have their own space. That’s why it’s crucial that each fish has at least 12 inches of tank space to itself so that it doesn’t feel stressed.

However, males can get territorial, especially while feeding or breeding, so choose tankmates wisely. Usually, cichlids and other non-aggressive species can live well with the Plecos, provided they are not bottom-dwellers.

Having a separate tank for candy striped plecos is the best way to ensure that they can breed. You need to install caves in the tank, following which the female will choose a cave to lay the eggs.

Each egg is yellowish and not more than 3mm long, which the male guards until they are ready to hatch. Depending on the temperature, the fry emerges after 6-7 days and feed on their yolk sac in the first week.

With that, it’s a wrap on today’s care guide for candy striped plecos; hopefully, now you can take good care of them.

If you follow the instructions mentioned above, rest assured that the fish will survive for a long time, and you will enjoy watching them grow. Plus, their mild demeanor ensures that you can introduce other colorful fish to the tank, adding vibrancy to this artificial underwater world.

See you next time with another fascinating guide. Bye!