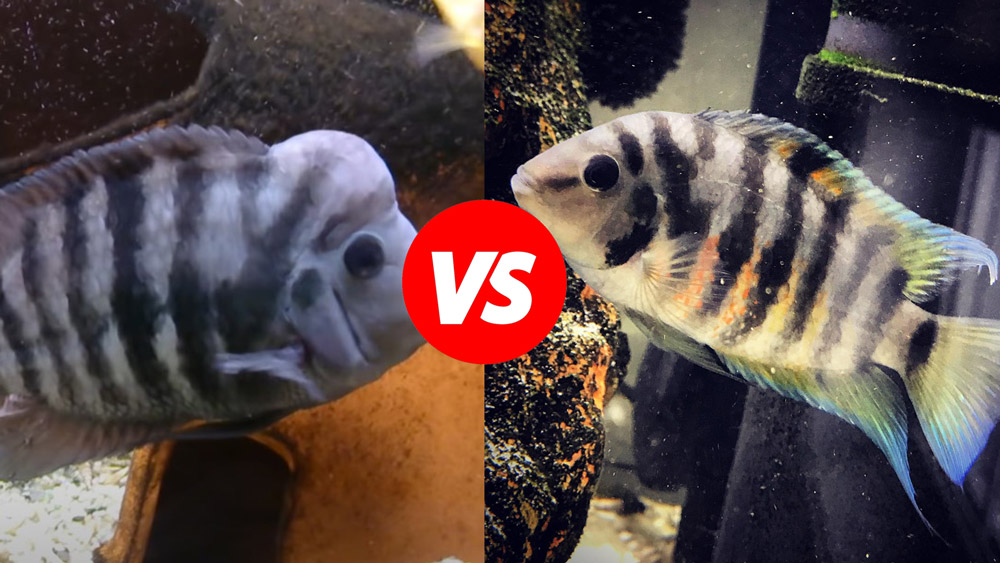 How many of you have put two Convict Cichlids in the same tank and waited a few months for your tank to fill with small fry before realizing that the two fish were of the same sex? These fish are prolific breeders. Still, the key is knowing how to tell a female convict cichlid from a male, as the two look very much alike.

In this article, we are going to discuss how you can determine the difference between a male or female convict cichlid by examining body shape, size, coloration, fin length, and other factors.

Convict Cichlid Male or Female? How to Sex?

The monomorphic appearance makes juvenile convict cichlids challenging to spot until they reach maturity and start showing their color patterns. Males are larger than females, and they don’t have any orange coloration on their lower bodies and dorsal fins.

The differences are subtle, but they’re there. Let’s take a look at the most obvious ones below!

It turns out that males of most cichlids species are more colorful than females. But not always, as is the case with convicts! Male convict cichlids typically have brighter coloration overall than what we see with females, including various shades or vertical striping patterns.

When a female matures and prepares for breeding, the belly will turn a pale to bright orange. Dorsal fins are also dotted with speckles that match this hue as well.

Male cichlids are comparatively larger than females, with the average length being 6 inches, and the females grow to a size of 4 inches in the aquarium.

In convict cichlids, males have sharp, pointed dorsal fins that extend past their tail fins, while females have shorter, fan-shaped fins that stop short of the tail fin.

However, this may not be the most reliable way of telling the differences between the sexes in these fish. Hobbyists have noted that some females have extra-long fins and that some males may sport rounded, shorter fins.

Males and female convict cichlids can be told apart by their genital papillae. These are tiny tubes arising from the urogenital openings in some fishes. Their purpose is to expel sperm or eggs.

I would personally find that the males have an egg tube that points straight and downward, but the females face backward, and their vents are slightly larger than the anus to facilitate laying eggs.

Closely monitor the behavior of your fish in the tank. Male convict cichlids tend to dart around in the tank, chasing almost any other fish in their territory.

The convict cichlids are known for their aggression and are not good for the community tank unless you have other robust similar sizes Central American Cichlids in a very large aquarium.

How to Tell if a Black Convict Cichlid is Male or Female?

Determining the gender of a black convict cichlid is tricky because the orange belly of the female may not be as obvious. Inspect the belly of the fish carefully for a bit of glowing orange.

The female’s fins will also be shorter and rounder. If they were bred in the same batch and are the same age, then the male will be larger than the female.

How to Tell if a Pink Convict Cichlid is Male or Female?

The pink female convict cichlid will be smaller than a male and also have shorter rounder fins. It will also have an orange glow on its belly that might be hard to detect against the hue.

How to Tell if a White Convict Cichlid is Male or Female?

It is easiest to tell the difference between a male and a female with the white convict Cichlids because the orange belly of the fish really stands out against the white color. Like most, the male is bigger and has longer fins than the female.

No, convict cichlids do not change gender. However, the female convict cichlids are great actors. The next female in line will act as a male and be able to fertilize the eggs when a dominant female isn’t paired off.

It’s common for two females to lay eggs together in Central American fish species. They can change their coloration to prevent attacks from other fish species and fool each other!

The key to sexing convict cichlids is always to use your keen powers of observation to inspect the belly of the fish. Almost always, unless the fish is such a deep black that it really is not visible, you will be able to detect the orange basal side of the female. Behavior can be telling, as the males are more aggressive. In general, but not always, the male is slightly bigger than the female convict cichlid.