Do Wolf Cichlids Have Teeth? (Do They Bite?) 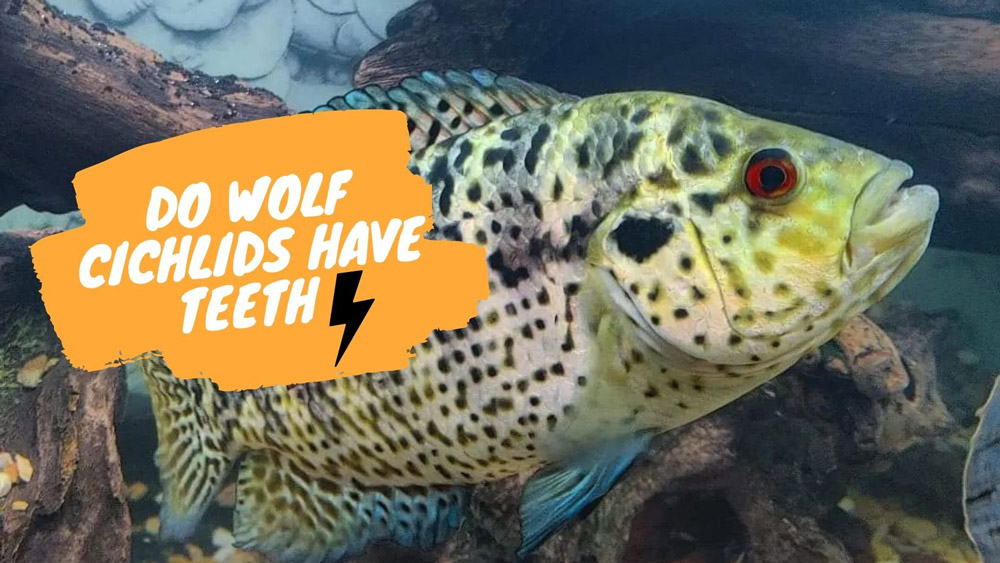 Are you looking for a large predatory and beautiful fish for a CA aquarium? The Wolf Cichlid (Parachromis dovii) is a perfect addition.

They can reach over 28″ (72 cm) in length, and they are by far one of the most aggressive cichlids in the world. Because of its size and aggressive temperament, this species really captures the spirit and majesty of its namesake.

If you’re looking to get your hands on this intelligent fish, there are some things you need to know. But the first thing you might be curious about is “do wolf cichlids have teeth” and how sharp they are.

In today’s guide, we will be discussing all the things related to wolf cichlid teeth. So keep reading!

Do Wolf Cichlids Have Teeth?

Yes, the wolf cichlids have a large mouth and an evolved pharyngeal set of teeth along with their regular teeth, which allow them to hunt down and consume prey much larger than themselves.

As a voracious predator, it feeds primarily on smaller prey, such as insects and crustaceans in the wild. In addition, their body is cylindrical with solid muscle and the belly is deeper than the top half; the pointed fins and large mouth help them capture food easily.

Make no mistake about it: wolf Cichlids will bite you if provoked. Their sharp teeth and strong bite can inflict real damage. It has been recorded from attacking its owner during routine maintenance work on an aquarium, so be careful and prepared with these predators.

Do not stick your hand in the tank to do a water change or clean as these fish are known for their quick strikes and voracity.

When it comes to feeding them, do not attempt to hand feed them as you can be bitten through your glove or hand.

Wolf Cichlid, also known as the Guapote, Dow’s Cichlid, and Rainbow Bass, is an aggressive and highly territorial fish. They are one of the predatory large CA cichlid species, as they have been known to bite humans who attempt to catch them from their natural habitat with bare hands.

When the fish are in breeding mode, their aggression level will skyrocket. It’s best to remove all other fish and separate the breeding pair.

How Big Do Wolf Cichlids Get?

As mentioned early, wolf Cichlids can grow up to 28 inches (72 cm) in length. Males are usually larger than females, some mature specimens can reach a length of 30″.

Due to their size, wolf cichlids are a popular food source for locals where they can be cooked in many different ways. If seasoned correctly, anyone traveling in Honduran waters can enjoy this tasty fish.

How Fast Do Wolf Cichlids Grow?

Like other larger Cichlids that tend to have an extremely high growth rate during the first few months of life, the wolf Cichlid is no exception. Every month, their size increases by around one inch. But after reaching 12 inches, they no longer grow that fast. Still, you can notice their growth month by month until they gain their full size.

It is also possible for them to grow faster by providing proper nutrition and water changes. Remember, these species are carnivores. But still, you can also feed pellets and some frozen foods. They will really appreciate if you provide them with several small meals daily. But take note, overfeeding is not a good idea for their diet.

Are Wolf Cichlids Aggressive Toward Other Fish?

Like other large predatory cichlids, wolf cichlid is NOT a community fish. They are a carnivorous predator, which means they will eat anything smaller than their own size or those that enter their territory. These bad boys will investigate anything you put in front of them and even bond over a shared prey.

That’s why it is recommended that you don’t place almost any other fish with them. They should be housed in a species specific tank. A pair might be working in a community tank, but the female still can be killed in an attack by a male, especially during breeding. The female will need plenty of large rocks, roots, or plants as hiding places.

A 130-gallon aquarium is fine for juvenile and smaller adult specimens. However, the aquarium should be large, at least 210g for a breeding pair or fully grown.

How Can You Tell if a Dovii is Male or Female?

The wolf Cichlids will start spawning at about 10 to 14 months of age, and they do so every 4 weeks.

Males are usually more blue than females, and dominant alpha males will have the brightest blue. The mature male tends to be larger than the female. Also, females have several gold/yellow colorations along their side which are absent in males.

But be careful, because these colors may vary depending on the location where you bought them from.

Now that you know all about Wolf Cichlids’ teeth and their aggressiveness, it’s time to decide if this is a fish for your tank.

Doviis are one of the largest predatory CA Cichlids known to man. Do not get fooled by their cute appearance; they will act like any other cichlids if you give them a chance.

We hope this article has proven helpful for any of you who are interested in buying this fish. Do not hesitate to leave us a comment below if you have any questions, we will be more than happy to answer them as soon as possible. Have fun!