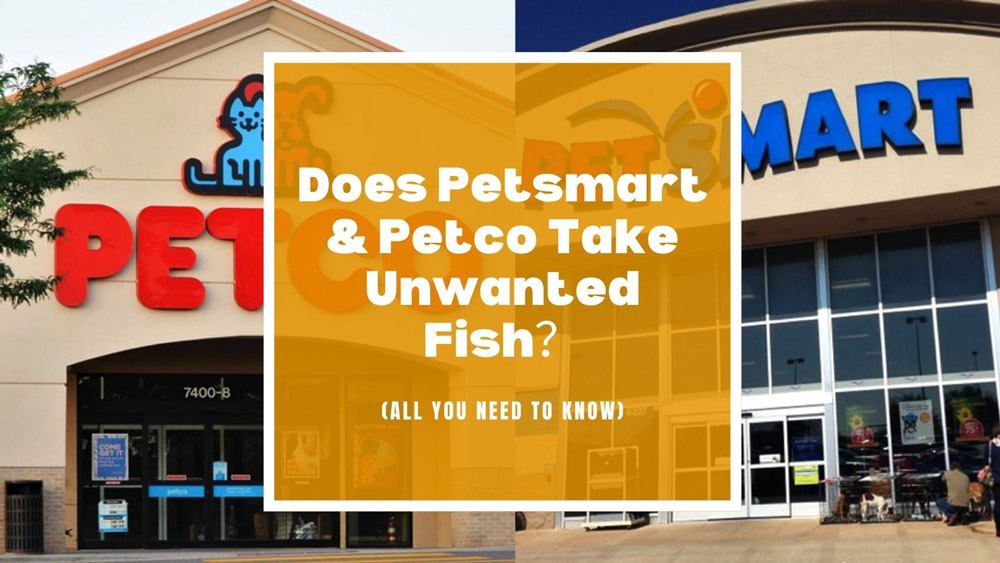 Whether you’re a novice fish keeper or an advanced breeder, you will accidentally or eventually be faced with the problem of having more unwanted fish than you can handle, either healthy adults or the weakest fry.

The dilemma brings two inappropriate plans of action. The first is to get rid of the extra fish by flushing them down the toilet. The second, and often more “humanely” method, is releasing fish into the wild. Unfortunately, neither of these two options is undoubtedly bad for the fish and the environment.

In this guide, we will go over the best and non-harmful methods of getting rid of unwanted fish.

If your fish are healthy, chances are they will quickly adapt to their new home and still thrive if you dispose of them in the following options.

The most common and recommended method of getting rid of unwanted fish is to reach out to your local fish store (LFS) or chain stores, like Petsmart or Petco. They will most likely take the fish off your hands for you. Some will even give you trade-in or store credit for your unwanted fish.

Some Petcos will only take unwanted fish for adoption purposes, and they won’t give you store credit or exchanges. But it really varies from store to store. The best way to find out is by giving your local Petco a call and asking them directly.

In addition, if the unwanted freshwater fish are bought from their Pet Care Centers, you can return them with a receipt within 30 days to receive a full refund.

Like any other chain store, every sale must be tracked and accounted for, PetSmart does not have a policy for taking in unwanted fish, but some stores may be willing to take donated fish. It’s best to contact your local PetSmart and ask if they would be willing to take the fish off your hands.

Your best bet is these Mom-and-pop independent aquarium-specialized stores. Even in the boonies, there’s bound to be at least one of these places. They will most likely accept your unwanted fish. They might even buy the fish from you if they’re in good condition.

Sell them On Freecycle or Craigslist

Depending on your area and the species you have, you might be able to sell them on Craigslist, eBay, or Aquabidor. For some rare species, like African Cichlids and Bettas, goldfish, etc., you can charge a “rehoming fee” and ask for pictures of the buyers’ current setups to make sure your fish go to decent homes.

Of course, you can also try giving unwanted fish fry away for free on Freecycle.

Local aquarium clubs are a fantastic resource for disposing of unwanted fish. These local aquarium enthusiasts will be more than happy to take your fish and give them a good home.

In addition, some clubs might even have “auctions” where members can bid on certain fish they want to add to their tanks. The money made from these auctions is often used to support the club or local charities.

Donate the Fish to Schools, Nursing homes, or Offices

Any place where there are people and aquariums, you can try to donate your fish. Schools can use unwanted fish for science projects or lessons on environmentalism; Nursing homes can use them for pet therapy or enrich the atmosphere; Offices can spruce up the place with a little bit of aquatic life. The first two often welcome such gifts, and you can even take a tax deduction as a donation.

Do remember to check if the facility you’re planning on donating to has any policies against accepting animals first.

The Dangers of Flushing Unwanted Fish Down a Toilet

All too often, the simple, quick, and effective method to dispose of unwanted fish is flushing them down a toilet.

First, this could be considered inhumane to the fish even though we deem them “pets.”

In addition, sick fish can spread the diseases or parasites to local drainage systems and eventually find their way into nearby waterways, where they can wreak havoc on the delicate ecosystems there.

So next time you’re thinking of flushing fish, think twice! It might be easier (and safer) just to give them away.

The Dangers of Releasing Unwanted Fish into the Wild

You might think that freeing unwanted fish into the wild so that they will have a “better life” is the best solution, but it’s actually a great example of good intentions gone wrong.

Releasing non-native species into a lake, stream, or river can cause all sorts of problems. Their ultimate destiny will not go as seamlessly as you think – swimming in massive water bodies with abundant food, but in reality:

They Will Likely Die

It’s simple. Some aquarium fish are not native to your area, and the sudden change in temperature or water conditions will kill them, or larger predatory fish will eat them. Of course, you can’t release a saltwater fish into freshwater or vice versa.

They Will Compete with Native Fish and Wildlife

Releasing aquarium fish into the wild will put them in direct competition with native fish for food and resources or even may kill other fish and wildlife; that’s why many Madagascan cichlids were believed to be extinct in the wild.

There is a strict rule against releasing aquarium fish (dead or alive) into the wild in many states.

They Might Introduce New Diseases or Parasites Into the Ecosystem

Your unwanted fish could be carrying diseases, parasites, or other organisms that will potentially harm or kill native fish and wildlife. These new diseases could also spread to humans through the contaminated fish we eat.

In some cases, they might even mate with other similar native species and create a new, destructive hybrid species that can be difficult to control or eliminate.

So, the next time you want to “set your goldie free” in the lake or a river or stream, please consider the potential consequences.

What to Do with Unwanted Sick Fish?

It’s tough to find anyone to take your diseased fish. The only way to get rid of them is to euthanize them in the most humane way possible and dispose of their bodies properly.

You can’t just flush sick or dead fish down the toilet like healthy fish. Many of the same problems exist as flushing healthy fish. Who wants to use a toilet knowing that there might be a dead fish in it?

I have written a post about how to euthanize a betta fish in the most humane ways, and you can use the same methods for other fish as well.

I hope this post has given you some ideas on what to do with your unwanted fish. As you can see, there are many options available, and it depends on your circumstances.

Instead of flushing them down the toilet or dumping these fish into the lake, donating your unwanted fish to your LFS is a great way to give them a second chance at life. They’ll be loved and cared for in their new home, and you’ll know that you’ve made a difference.

If you have any good ideas or experiences to share, please feel free to leave a comment below.