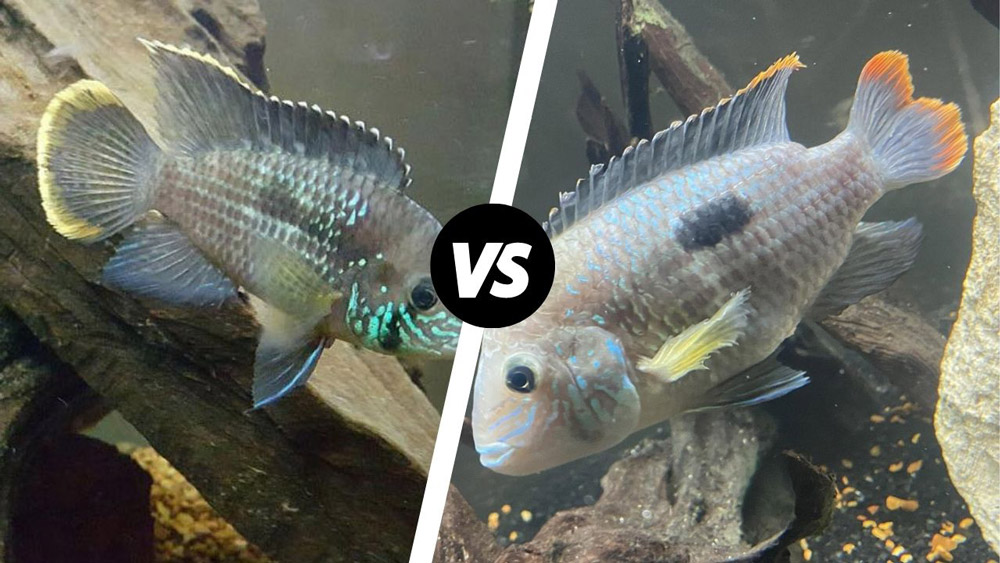 The Green terror cichlid (Andinoacara rivulatus) is a fascinating exotic tropical freshwater fish in the aquarium community. Their magnificent colors and interesting behaviors make them a great choice for many experienced freshwater aquarists.

But if you want this beauty in your home aquarium, you should know a few things about their care and breeding habits, as the females are often more aggressive than males.

Below you’ll learn all you need to know about female green terror cichlids so you can decide if they’re the right fish for your freshwater aquarium.

The green terror (A. rivulatus) is one of the large and aggressive South American Cichlids, which natives to the river basins in western Ecuador and central Peru. As their names tell, these fish are more aggressive than other members in the genus: Andinoacara, including their similar-looking cousin, the Blue Acara (Andinoacara pulcher).

Interestingly, another close cousin, the Andinoacara stalsbergi, has the same common name, “green terror.” It was previously included in A. rivulatus but was recently classified as a separate species in 2009.

So when you’re standing in the LFS thinking about adding one of these beauties to your tank, make sure you grab the right one.

There are a few differences between female and male green terrors. The female is typically smaller than the male and has a more elongated body shape. The female coloring is also less flashy with a predominately green body, while the males are brightly colored with a red edging on the tail fin as they mature. The most significant difference is the female’s blunt, U-Shaped breeding tube.

As discussed earlier, female green terrors are typically smaller than their male counterparts. It’s challenging to sex a green terror until they’re around 4-5 inches, but you can estimate the sex by looking at the growth rate. The female will typically grow at a slower rate than the male.

Female green terrors are more slender and have an elongated body shape when compared to the stockier males. Adult males will develop a pronounced round hump on their heads as they mature.

The female green terror’s primary distinguishing feature is her breeding tube. This is a blunt, U-shaped tube that is located on the underside of the fish, about 2/3 of the way toward the tail. Males, on the other hand, have a pointed V-shaped tube.

Green Terror Cichlids have been bred in captivity for many years, so it’s not difficult to find a breeding pair. When purchasing a breeding pair, make sure that you get two fish of the same size and color. It’s also best to buy them from a reputable breeder to ensure they are healthy and disease free.

The best way to breed green terror cichlids is to let several juveniles grow to maturity and form their pairs at their own pace. This is a natural process in which you will obtain strong and long-term pair bonds that typically result in seasonal mating.

Again it’s a high risk to put random males and females together as they’re highly aggressive and territorial. There’s also a good chance that the female green terror will be killed or harassed to death. If you must put them together, do so in a very large tank with plenty of hiding places or keep a divider handy for the female.

Once you have a pair, they will generally mate for life. When the female reaches 4-5 inches, she will start to exhibit breeding behavior. This usually includes defending her territory and chasing away other fish. The male will then begin to court the female by swimming around her and nudging her gently.

If she’s receptive, they will clean the selected spawning site. To increase the chances of a successful breeding process, you can raise the water temperature by a couple of degrees. Don’t forget to provide suitable breeding sites, such as flat rocks.

The female will lay anywhere from 300 to 400 eggs, while some females can even lay upwards of 600 eggs. Once the eggs are laid, the male will fertilize them externally. Unlike many species, you don’t need to separate the parents from the eggs since these fish are great parents.

During this time, the parents will become increasingly aggressive. It’s best to remove any other fish from the tank during this time, as the male will attack anything near the breeding site.

Cichlid fry is very sensitive to poor water conditions, so it’s essential to keep the tank clean and well filtered.

Female green terror cichlids make excellent additions to a community tank and are beautiful fish on their own. They are highly aggressive and territorial, so be sure to provide them with plenty of hiding places if you plan on housing them with other fish.

Breeding green terror cichlids is a breeze when you have a healthy, compatible pair. These fish make great parents and will readily breed in captivity.

If you have any questions about female green terror, we’d love to hear from you.