Fish Fasting 1 Day Per Week: Is It Actually Good?

Fasting fish is a term that gets bandied about a lot by fish keepers, and there’s a lot of anecdotal information on the topic. Some say it’s essential, and others say it’s just a myth.

But what does the science say about fasting aquarium fish? Turns out there’s not much research on the subject.

So, what’s the truth? Is fasting really necessary for healthy fish, or is it simply an old wives’ tale? Let’s take a closer look at this topic and find out for ourselves.

What Does Fasting a Fish Mean?

In the wild, fish often experience food shortages. This is due to a number of factors, such as weather or water conditions and reproduction. Thus, their metabolism is able to adapt to these conditions, such as periods of fasting.

When it comes to fasting a fish, there are a few things you need to know. First of all, fasting a fish does not mean that you’re going to necessarily starve them. Instead, it simply means not feeding them a day or two each week.

How Does Fasting Impact Fish?

Basically, the main objective of most scientific studies of fasting or restricted feeding on fish aims to improve fish growth rates and feed efficiency for the aquaculture industry.

However, as aquarium hobbyists, we can still glean some interesting information from these studies.

Fish farmers utilize fasting under many circumstances, including:

Studies have shown that fish subjected to fasting had higher growth rates after feeding resumed as compared with fish fed continuously.

A study [1] claims that fasting tilapia one day a week does not affect their growth efficiency, and they can adapt well to feeding frequency changes.

Additionally, they also found many other effects of fasting fish.

Here are a few:

Should I Fast My Fish Once a Week?

So, what does this mean for the aquarium fish keeper? When fish are kept in aquariums, they generally have a constant food source and don’t need to worry about food shortages.

You might have noticed from the previous research that some species have stronger adaptability in regulating glucose metabolism, so fasting fish a day once a week might not have any issues.

However, fish that are not so well-adapted may experience digestive hormone imbalance, which can eventually lead to health problems.

The problem is which species are well-adapted and which aren’t?

To be honest, I don’t know…

In the wild, what individual species eat depends on whether they’re carnivores, herbivores, or omnivores. To help your fish stay healthy, it’s important to give them food they would eat in their natural environment.

On the other hand, some species, such as many Lake Malawi Mbuna Cichlids, develop a social hierarchy in which subdominant fish appear capable of reducing their own food intake to avoid social conflict.

So, fasting once a week for these fish may temporarily disrupt the order and result in higher aggression from the dominants.

Also, the age and size of the fish are other factors to consider. As fry and juvenile are still growing, they might not be able to develop the adaptive mechanisms required for fasting as quickly as adult fish.

Lastly, for heavily stocked tanks with voracious eaters (no chronic overfeeding), such as goldfish, I don’t think a fasting day or two is a 100% necessity.

Besides the species, you should take into account the long-term overfeeding of fish in aquariums. This study [6] found that overfeeding fish caused stress-related immunosuppression, which resulted in a decreased ability to fight off infectious diseases.

There are several potential benefits you need to consider when deciding if a day of fasting would be a benefit to your fish.

Often times overfeeding is the most common mistake that can lead to a variety of serious problems. It can also stress the fish and reduce their innate immunity, which in turn can lead to an increased susceptibility to diseases.

Choose to skip feeding one day per week as a precautionary measure to help avoid overfeeding.

If you’re new to fish keeping and don’t know what to feed your fish or how much, I would recommend fasting your fish once a week until you have a better understanding of their dietary needs, including a feeding regime and appropriate quantity.

Fish do get constipated, even the main reason is the lack of the necessary indigestible matter (or dietary fiber) in their diet, but it is also directly or indirectly related to overfeeding.

So, you help reduce the likelihood of your fish becoming constipated by fasting your fish one day per week.

Fasting can also reduce the amount of waste produced by your fish, which reduces the risk of affecting the chemistry of the water, including nitrite, ammonia, and pH levels.

In a way, you’re giving your aquarium filter a break and allowing it to catch up and remove the residual waste products in the water.

One of the most interesting benefits of fasting is the potential to increase longevity. This has been shown in a study with insects, where those that were fasted one day per week lived significantly longer than those that were not fasted.

While there is no concrete evidence that this benefit also extends to fish, it’s certainly an intriguing possibility.

As mentioned earlier, fish farmers use fasting as a way to improve feeding efficiency and reduce costs. The same goes for the home aquarium fish keeper.

Is fasting good for fish? It is not a universal good or bad thing. It depends on your fish species – its dietary requirements, social behavior, appetite, age, size, as well as your taking skills (including overfeeding).

Fasting fish is a common practice among fish farmers, and there are benefits to it. However, for the aquarium fish keeper, there’s not much scientific evidence to support the need for fasting fish on a regular basis.

If you do choose to fast your fish, make sure to have a better understanding of their dietary requirements, including a feeding regime and appropriate quantity. 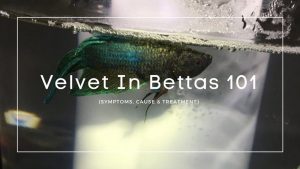 Velvet In Bettas 101 (Symptoms, Cause & Treatment) 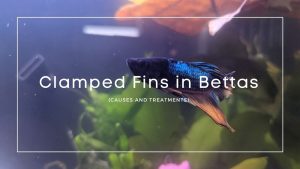 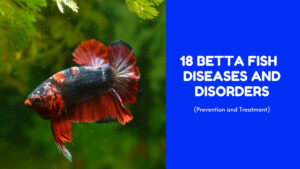