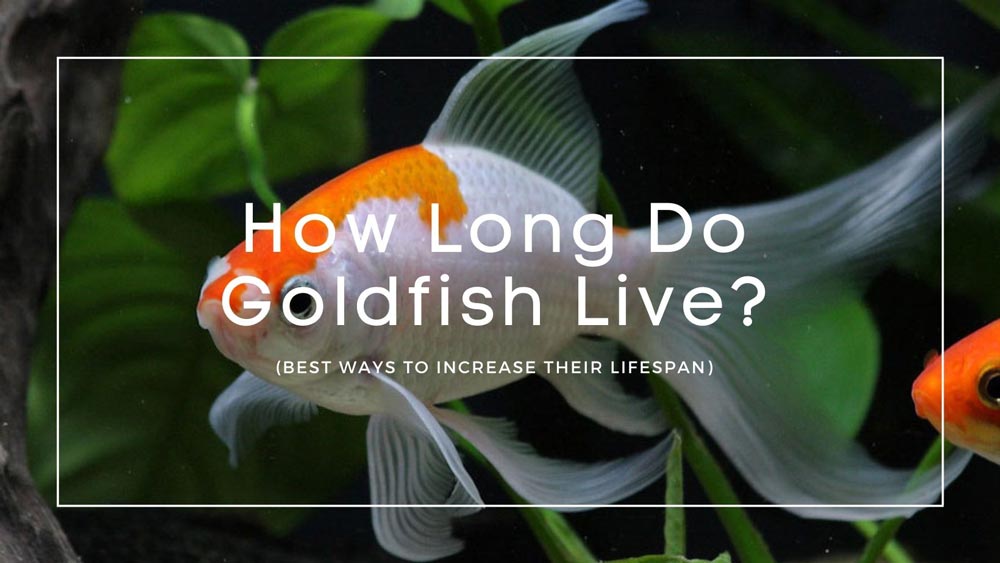 One of the biggest misconceptions about Goldfish concerns their lifespan. Chances are, you know more than a couple of people who have owned and lost goldfish after only a few weeks or months. The misconception comes down to the assumption that this is normal. Entirely too many people believe that Goldfish as a rule are doomed to short lifespans.

However, there is so much more to this subject than many realize. For example, there is a long list of factors which can influence the lifespan of a goldfish. Furthermore, the type of goldfish you own can also determine how long it is likely to live.

The truth of the matter is that in many situations, your Goldfish can live for years. In some cases, they can even live happily and healthily for several decades. We’re going to show you what we’re talking about. This will also cover everything you can do to ensure your Goldfish lives the longest, most comfortable life possible.

Table of Contents show
1 Why Are My Goldfish Not Living Very Long?
2 Factors Influencing Goldfish Lifespans: Which Type Do You Have?
3 How Goldfish Type Influences Longevity
4 Why You Should Never Keep Goldfish In A Bowl
5 What Else Can I Do For My Goldfish?
6 Conclusion

Why Are My Goldfish Not Living Very Long?

Bred since the 19th century, people love Goldfish for how easy it is to care for them. Unfortunately, a shocking number of people subscribe to the notion that Goldfish are a disposable pet, prone to a short lifespan. These are falsehoods more frequently than many realize. This ranks right up there with the incorrect belief that Goldfish have short memories.

Goldfish belong to a carp family known as Cyprinidae. Among other traits, this family of freshwater fish are known for their ability to live upwards of twenty full years. Yes, you read that correctly.

So, what’s the problem? Why aren’t your goldfish living even a tenth of that average lifespan? There are a few things on this subject you need to keep in mind.

Factors Influencing Goldfish Lifespans: Which Type Do You Have?

Two problems with giving you a rough estimate of how long your Goldfish is going to live:

Even genetics and breeding conditions can play roles in the average lifespan of your goldfish. In order to give you the best possible estimate, we’re going to need to tackle all of these questions individually.

Let’s start with the different types of Goldfish you can come across.

Common Goldfish have the longest lifespans of any of the different types you are going to encounter. When properly cared for, they can live as long as twenty-five years. In some cases, they can live for fifteen full years longer than that.

Tied for second are the Shubunkin and Comet goldfish types. Each can live for upwards of fifteen years under the best possible circumstances. You will also want to pay attention to the Oranda goldfish. While they tend to live for around ten years on average, the best examples of the type can live for as long as twenty years.

In fact, most goldfish, under the best efforts towards how to care for goldfish, are going to be able to live for at least a decade, if not more. The only type of goldfish with a potentially and relatively short lifespan are the Fancy goldfish. They may live just five years, compared the others we have mentioned here. On the other hand, they can also live as long as ten years under certain circumstances.

There are also Fantail goldish. These usually live for at least fifteen years. Many live for much longer than that.

At this point, it should be pretty clear to you that the issue does not come down to goldish being stuck with a short lifespan. As it turns out, there are many things you can do that are going to give your goldfish, regardless of the specific type you purchase, the best quality of life possible.

In order to achieve this, you’re going to want to start with how you’re keeping your goldish in the first place.

Why You Should Never Keep Goldfish In A Bowl

The image of the goldfish in a bowl is something almost all of us can bring to mind. It is a visual that can be found or referenced in virtually every type of media imaginable. It can even be used to describe someone who finds themselves living in crowded, overwhelming conditions.

This description is apt for goldfish, as well. The truth of the matter is that goldish should not be permanently kept in a bowl under ANY circumstances. The thing about goldish is that they are very, very hardy fish indeed. This means they can live under fairly diverse settings.

However, this hardiness, combined with other factors, has created a situation in which it is believed goldfish need very little to survive. A bowl is simply too small, with the largest examples usually in the five-gallon range. Like most freshwater fish, goldfish need lots of room to live, eat, play, and potentially breed. Experts say you should start with tanks that are least twenty gallons.

Goldfish have lots of energy. Make sure they have enough space in which to use that energy properly! You should also keep in mind that goldfish produce quite a bit of waste. This isn’t prohibitively so, but a small tank or fish bowl will not be enough to keep this fact in mind. Their waste can impact the water to the point of creating an unhealthy environment. This is why many do not live long.

Another reason is that smaller tanks and bowls also limit their growth. Goldfish need room enough to grow the standard size of anywhere from half to a full foot. Considerably larger than the impression we sometimes have of them as these tiny things.

To summarize: Getting a good-sized tank is literally the most important thing you can do to ensure a long lifespan for your goldfish. There are a few other things you can do, and we’re going to touch on those shortly, but a large tank with good filtration and other features is essential.

What Else Can I Do For My Goldfish?

In case you are wondering: Yes, establishing an actual outdoor pond for your goldfish is the best way to recreate their natural habitat. However, as you may have also guessed, creating your own goldfish pond is something that requires a significant time, money, and energy investment. At the end of the day, you can take our word for the fact that a large tank with the right accessories and other essentials will be just fine for your goldfish.

Let’s wrap things up with a few more tips on how to give your goldfish the best possible degree of attention and care:

It is estimated that there are over 125 different goldfish breeds in the world. Regardless of the specific ones you choose for your home, keep all of the above in mind to ensure they receive the best care.

Guppy Fin Rot 101: Everything You Need to Know (Causes & Treatment)

Cory Catfish and Betta: Do They Get Along Well?