Help! I Have Constipated Betta! What Do I Do?

Can Betta Fish Become Constipated? Yes, Betta bettas can indeed get constipated. Constipation is a common problem for all fish, especially laterally compressed ones. Goldfish and Bettas are two types that seem more prone to it.

If you are planning to own these stunning, endlessly fascinating fish, you’ll want to know what to do in the event of having a constipated Betta fish. We’re going to take a closer look at not only how bettas can get constipated but solutions to help them feel better in no time at all.

So, without further delay, let’s dive right in!

How to Tell If Your Betta Fish is Constipated(The Symptoms)

Constipation and indigestion can be diagnosed at home by monitoring your Betta’s behaviors, appearance, and appetite. If you observe that your fish is suffering from the following signs, take note and start taking steps towards treatment:

Constipated Betta signs and symptoms caused by inflammation of nasal passages include: 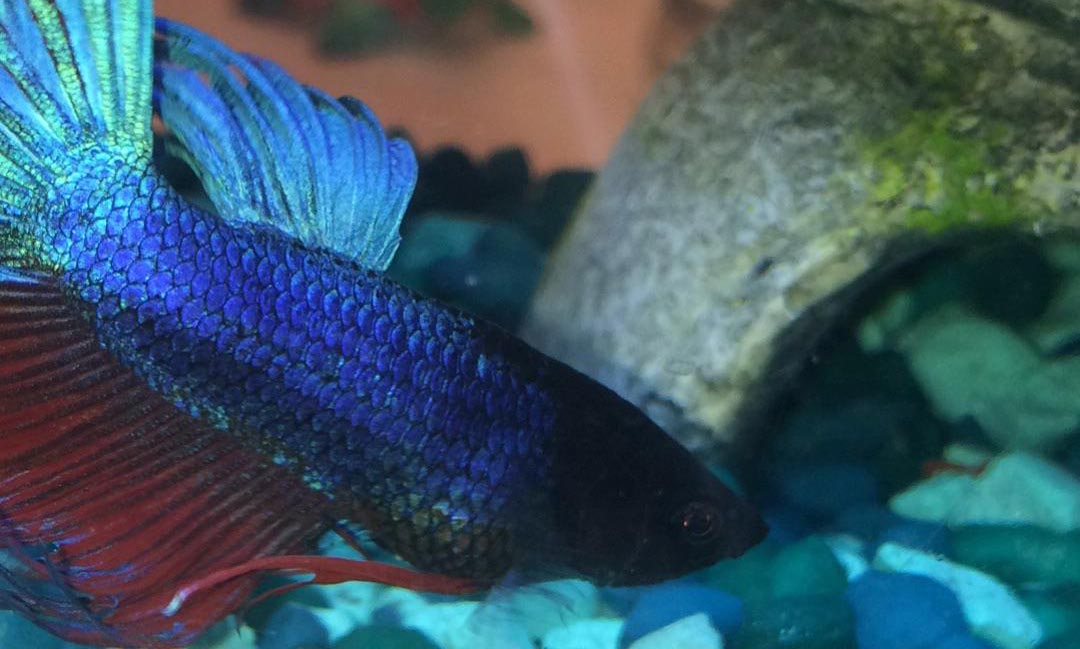 The first sign of constipated betta fish is its distended and bloated belly. When your betta fish cannot pass foods out of their bowels, it’s going to start expanding. And the longer that they remain constipated, the bigger their belly will grow. 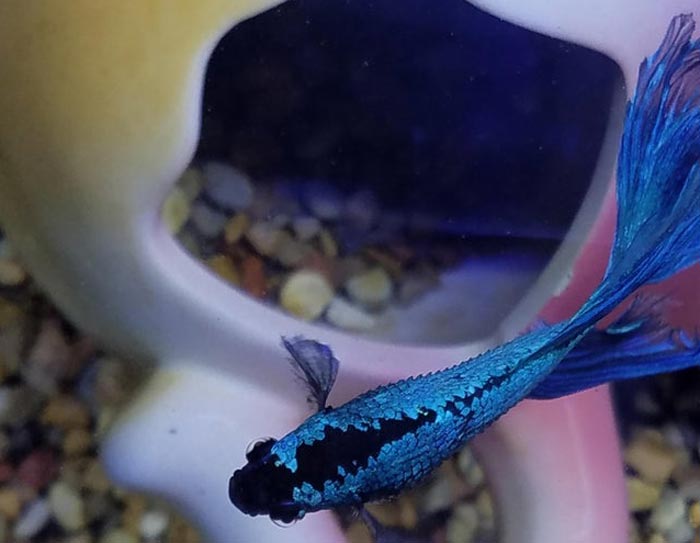 However, a bloated belly can be caused by more than just constipation. Dropsy disease(which is more a symptom of an actual disease/infestation than a disease itself) can also contribute to the bloat. In most cases, Dropsy is often a result of Kidney failure, which causes swelling and fluid retention. How can you tell the difference between dropsy and constipation? The condition can be identified by the classic “pinecone” look (raised scales make the fish look like a pine cone) that it gives to an afflicted betta’s body.

One of the main signs that your betta fish is constipated includes not eating and less poop. For healthy and active Bettas, they will have a voracious appetite and never ignore their food. If you notice that your Betta is refusing food and not eating, this could be a good indicator for constipation.

It’s also important to evaluate the color and texture of his poop. Healthy feces should appear dark brown in color and will sink right down into the substrate. However, if you notice a pale-colored stringy substance that often remains attached to him as he swims around- chances are your little buddy has been constipated.

Constipated bettas will swim sluggishly, occasionally slowly following other fish around the tank, lingering on the bottom or hanging out at the surface in the corner of the tank. Any Betta fish with any of these lethargic behaviors means he doesn’t feel well, and constipation could be the cause. 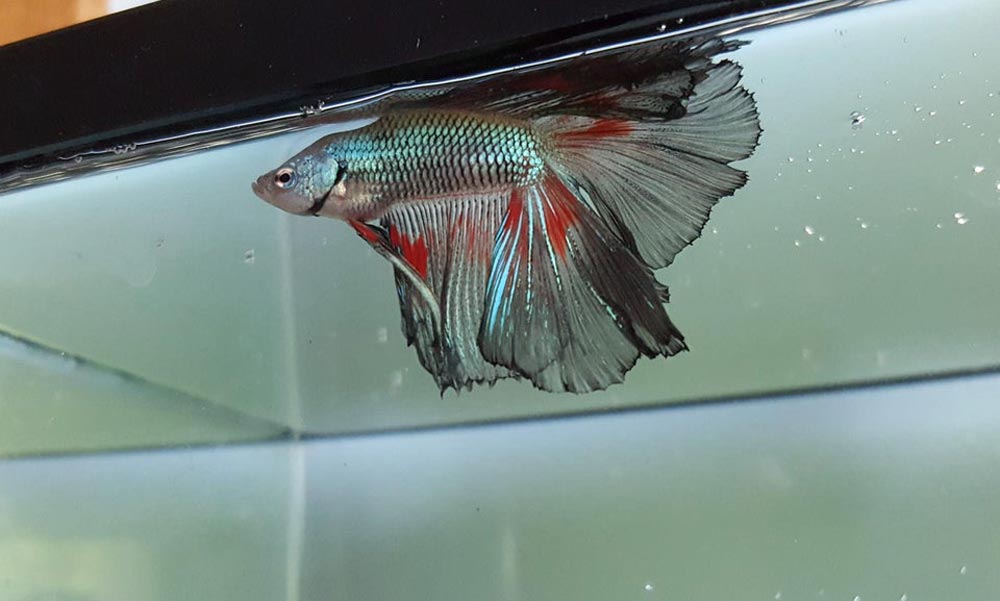 When your bettas are constipated, they quite often develop problems with their swim bladders. You will find that it’s hard for them to swim upright or reach the surface of the water without sinking. Your little guy may float nose down, and sometimes, he will swim on his side. These erratic, uncontrolled swimming behaviors are all classic symptoms of swim bladder disease(SBD), which is sometimes involved in constipation, can be cured by feeding some daphnia and keeping water clean.

Now that you know for certain that it’s constipation, you can start to look at the best options for treatment. However, this doesn’t mean you should rush out and buy the first product you find or try the first idea that someone suggests to you.

The first step in the treatment stage is in knowing exactly where the constipation is coming from. The answer to this question can go a long way towards informing the specific care you give them. If the treatment method isn’t the right one, you’re going to find yourself treating it repeatedly. We want a long-term solution, as opposed to a short one.

Here are some of the most common causes of constipation among betta fish:

This is one of the first possibilities you will want to explore. We know that betta fish are carnivores. What some fail to appreciate is that even though this is true, you still need to make sure they are getting the right amount of fiber.

This is again something we share with Betta. Most animals, without the necessary fiber intake, will become bloated and constipated. Betta fish are generally up to eat anything you give them, as long as it comes with meat. That doesn’t mean it’s the only thing you should be feeding them.

A betta fish that only eats flakes or freeze-dried food is at risk for constipation. In fact, most fish that live off the appropriate amount of fiber or roughage often develop constipation issues and other health complications. Dry foods will expand in the gut because they absorb moisture during digestion, can contribute to constipation. I soak my dry food in the tank for about ten to fifteen minutes before I feed it. This helps break down any hard pieces that might be too difficult on sensitive digestive systems.

When we say that even with the best betta pellet foods on the market, your bettas may need more, this is what we’re talking about.

Remember what we said earlier about fiber? This is where the pellets are unfortunately going to fail you. This is true of even the top pellet products for bettas. While they will provide your bettas with a plethora of crucial nutrients, they aren’t going to give them everything. For that, you’re going to need live food in the diet. A diet with this attention to balance all but guarantees you won’t have to worry about constipation.

Bloodworms, brine shrimp, and daphnia are three of the best live food for betta fish options out there. However, these high-protein fish foods are notorious for causing constipation, especially Bloodworms. Bloodworms also called “Betta Candy”, are one of the avoided foods that can cause constipation due to their shape and high protein & iron content. But there is a way to help prevent this problem: feed them sparingly and as treats only!

Whether it’s the high-protein diet that bettas thrive on or just because they love to eat, overfeeding your betta fish can cause constipation. Bettas are gutty fish and will keep eating even when they’re completely full up; that’s why it’s important to only feed them a couple of times per day for no more than a few minutes each time. Otherwise, you might find yourself with an unhappy little guy who is as bloated as he looks!

A Word On The Value Of A Large Tank For Bettas

If none of the above applies to you, the problem with your Betta might just be a lack of exercise. The value of exercise for bettas isn’t always something that occurs to people. This is why we always tell people to get a tank large enough for everyone in it to be happy. Not only do Betta like to have space to eat, rest, and even hide, but they also like to have space to move around. If the tank is too small, they can’t do that.

Small, cramped surroundings can also prove to be highly stressful for bettas, which can influence diet and lead to constipation.

Your tank should be five gallons at the very least. We would suggest something larger.

What Are The Best Treatment Options For Constipated Betta?

Lets’ wrap things up with a look at some of the best treatments for constipation in betta fish. Fishkeepers will often medicate for Dropsy or SBD, only to have the problem worsen. The first step in any symptoms where a betta fish is bloated from an unknown cause should be treated as constipation unless you found other disease symptoms.

No matter what treatment you choose to alleviate your constipation, the first steps are always the same.

Fasting for more than 3 days is not recommended. It’s important for your Betta fish to maintain proper nutrition as well as keep the gastrointestinal system functioning properly so that they can shed parasites/pathogens on a regular basis as needed.

I also recommend you turn the heater up a degree or two to speed up his metabolism.

If this does not work, then you may need to use one of the following additional methods:

Feeding them Frozen Daphnia Instead of Peas

If your little guy will eat, try to get him to eat frozen daphnia that you can find at many pet stores. Daphnia acts as a laxative and works with his digestive system than peas. Unfortunately, many fishkeepers believe feeding bettas peas will help their digestion, but it can harm them because they are insectivores who don’t digest plant matter well!

Make sure only to use unscented, undyed Epsom when medicating your fish. It would be best to have an Epsom salt bath with 100% water changes daily.

How to prepare Epsom salt bath:

How long does my Betta stay in this salt bath?

We highly recommend doing this safely 5 times a day for severe symptoms. If you’re lucky and catch an ailment early, one treatment will work. After 3 days, if your Betta fish does not show improvement, it is time to look for more vital medication.

Constipated Bettas are a stubborn problem for fishkeepers and can be caused by many reasons. I hope this article was helpful for those who have a constipated Betta and are trying to figure out how to cure it. I tried to cover all of the reasons and treatments, but if you think I missed something, let me know in the comments below.

Good luck with your little boy!