Crowntail Betta 101: Get The Facts On Owning And Caring 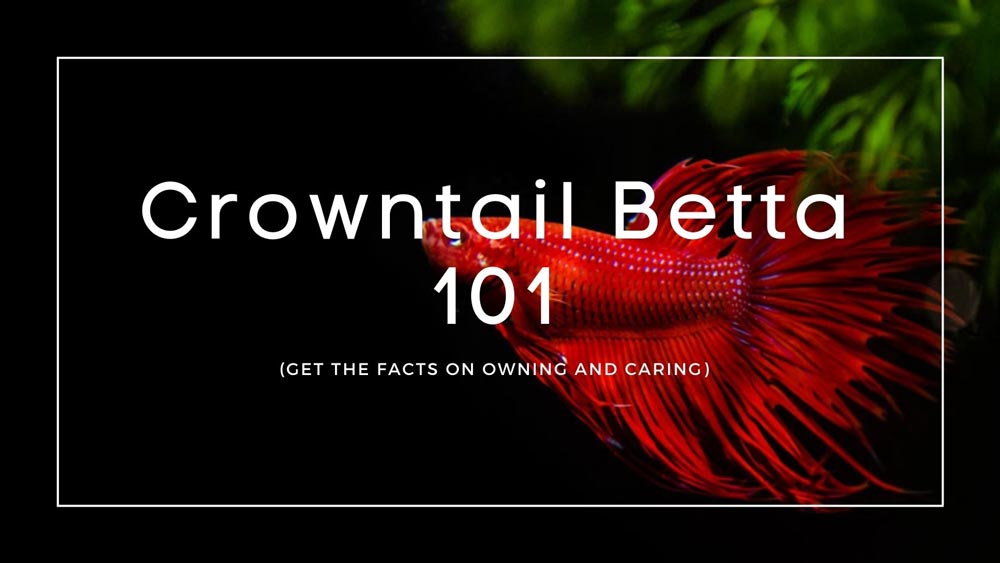 Celebrated the world over for stunning caudal fins, the crowntail betta fish can make for a wonderful addition to your aquarium. These are some of the most popular types of fish to be found anywhere in the world. It isn’t hard to see why. We are looking at bright, lovely, and decidedly intelligent creatures. Your crowntail can prove to have a personality all its own.

At the same time, owning and caring for a crowntail can have its own unique challenges. If you are new to the world of betta fish, or just new to Crowntails specifically, there are several things you need to keep in mind. This begins with making sure you’ve chosen the right aquarium and equipment. It also means knowing how to feed and care for your Crowntail from one day to the next.

While not significantly difficult to take care of, knowing what they like to eat, signs of illness to watch out for, and the best products to buy can ensure your Crowntail is happy for many years to come.

Where Do Crowntail Bettas Come From?

Also known by the behavioral name of Siamese Fighting Fish, the Crowntail Betta is a visual wonder. People become utterly enchanted with their beauty, particularly in their fins. Ancestors of these fish can be traced back to countries like Thailand, Malaysia, Indonesia, and Vietnam.

Beyond the stunning fins and quick, intelligent eyes, Crowntail are also known for pretty aggressive behavior. If you are a beginning hobbyist with bettas in general, understand that crowntails are likely going to be the most aggressive fish you have ever owned. This can create potential conflicts with other types of fish in the tank, if you have any.

Before making any purchasing decisions with regards to bettas, make sure they are going to be suitable tank mates with anyone else you might have in your tank. There are quite a few different fish which can work with crowntails just fine.

First bred in 1997, the Crowntail has skyrocketed in popularity in the years since it was first introduced to the world. You can always spot a Crowntail by paying attention to the largeness of its fin extensions. The fin itself, as we mentioned earlier, is considered to be its most appealing feature. It can be an utterly stunning blend of vivid reds and deep blues. Their colors are evocative of everything we love about marine life.

Here are some basic facts about Crowntail Bettas, before we get more deeply into the subject of personality and other traits: 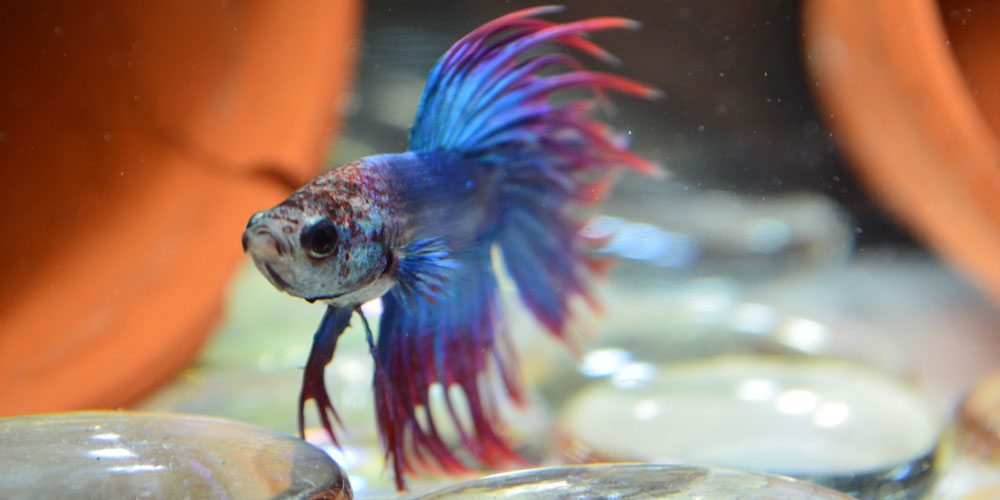 Now, let’s discuss the typical behavior of the Crowntail. 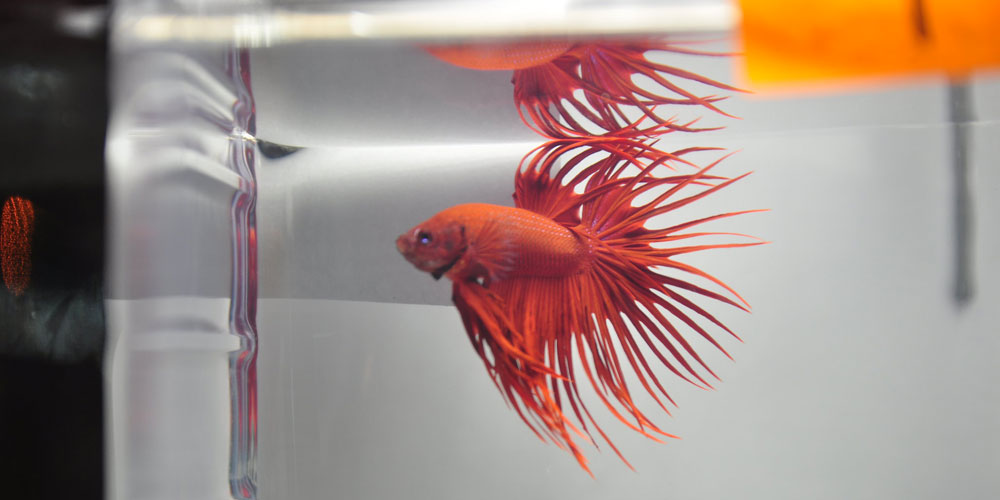 While domesticated betta fish are relatively more subdued than their in-the-wild counterparts, we are still talking about one of the most aggressive types of fish you could ever introduce into an aquarium. In their native countries of Thailand, Malaysia, and elsewhere, they are known as Siamese Fighting Fish for a reason! Their fights can be intense. Many breed Betta specifically for what they have to offer in this particular area.

Remember: Throughout Southeast Asia, people love to catch and pit betta against one another. It is a highly competitive sport, and this emphasis on aggression carries over to every type of betta fish imaginable. You will certainly experience this when you bring one home.

Typically, the Crowntail does not get along with others. It can be fairly territorial, and they generally seem to prefer to be left alone.

Again, it is well within the realm of possibility for Crowntails to live in harmony with other types of fish, but you should still keep their personalities in mind. The Crowntail Betta males tend to be the more aggressive of the two, but don’t discount a feisty female by any means!

At this point, you’re ready to start shopping for a Crowntail. Keep in mind what we suggested earlier with regards to a breeder or seller. You can find Bettas of all shape, sizes, and colors at most major pet stores. There are even online options.

Many longtime hobbyists will tell you that their preference is to go to dedicated breeders. These individuals tend to have the highest quality Betta, which is also reflected in the typical prices. Going through a reputable breeder ensures you’re getting exactly what you want.

Getting Your Crowntail Betta Tank

The first step in bringing a Betta home is to get the right tank. Some people will tell you that five gallons is just fine for a Betta. While they will ultimately be fine in such conditions, what you really want to do is invest in something in the ten to twenty-gallon range. In smaller tanks, your Betta can become unhappy from crashing into the glass all the time.

20-gallon tanks are particularly a good idea when you’re planning to buy more than one. Don’t forget that Crowntail Bettas prefer to be alone. They are territorial by nature, and that territory needs to be fairly expensive to keep them happy. Larger tanks also give you the ability to add the kind of vegetation that will really appeal to them.

At the end of the day, our suggestion is to go with a 10 gallon tank. Even if you aren’t planning to get any more fish for the foreseeable future.

As you check out the best plants for Betta fish, make it a point to purchase both Indian Almond Leaves and a sturdy tank lid. As far as the lid is concerned, this is to ensure your Crowntail never jumps out of the tank. Yes, Bettas really do love to jump out of the water. While doing so won’t instantly kill them, it is still obviously a situation you’re going to want to avoid.

The Indian Almond Leaves add a variety of natural, highly beneficial acids for your Crowntail betta.

What Are The Optimal Conditions Of A Crowntail Betta Tank?

Betta fish in general are pretty tough. Having said that, there are still several factors concerning ideal tank conditions you’ll want to keep in mind.

Remember always that Crowntails are freshwater fishes. This thought should lead not only the conditions of your tank, but any potential tank mates you may consider later on.

The first thing you need to do is make sure the pH levels are ideal. This ranges from 6.4 to 7.0. Anything lower or higher than that can be highly damaging to your Crowntail. You should aspire to a water hardness of two to five carbonate hardness, which is expressed as dKh.

The water temperature needs to be in the range of seventy-six to eighty degrees Fahrenheit. Again, any variation to this can result in stress and other problems for your Crowntail. It can cause significant damage to their metabolism, which can spiral into other health issues.

Keep an eye on these tank conditions at all times. Floating plants can also be a good addition to any tank. This is due to the fact that Crowntail bettas love to use them in the creation of what are known as bubble nests. As far as Bettas are concerned, bubble nests are highly important. They are particularly vital for mating purposes.

In terms of specific numbers, you’re going to have to do a little trial and error. Keep in mind the suggestions made above, and don’t be afraid to make minor adjustments within that range, should the need arise.

Gravel or certain types of sand are fine for the bottom of your tank. Some even opt to not put anything down there at all. This option certainly cuts down on tank maintenance. At the end of the day, your betta is going to be fine with any of those. If you want to replicate their natural surroundings to the letter, you’re going to want to go with sand.

For tank lighting, dimmer is always better. The Crowntail Betta do not like to be exposed to bright lights. This can put considerable strain on them, leading to a variety of health conditions. 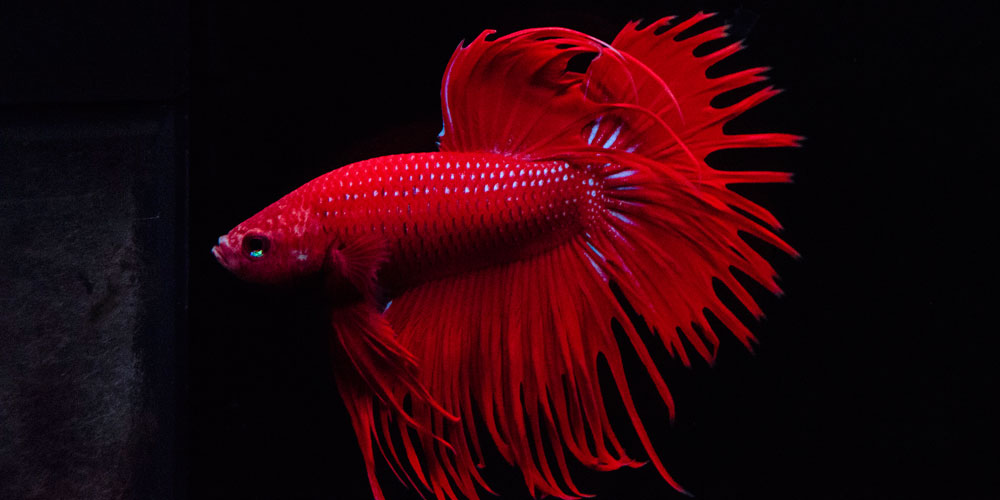 A Final Word On Compatibility And Other Fish

While some prefer to keep Bettas to themselves, many believe they can make for fine tankmates for a variety of other freshwater fish. It really comes down to making sure you’ve created the best possible conditions for everyone involved.

After all, as we’ve said, the Crowntail Bettas are happier when left alone. They need a significant amount of space. They can behave very aggressively towards any other fish, including other Crowntails, who happen to get into its personal space. You do not want to overcrowd the tank. At this point, you’re going to want at least a twenty-gallon tank.

You generally do not want to have more than one male Crowntail fish in your tank to begin with. Doing so can create a hostile atmosphere. In all likelihood, they are going to simply fight one another, until one of them dies.

Guppies, frogs, shrimp, and neon-tetras in general are all good tankmates for a Betta. Anything that might mirror its own behaviors, particularly with regards to aggression, is not a good idea.

The Ideal Diet For Crowntail Bettas

Diet is obviously very important for your Crowntail. Being carnivores, you want to make sure the diet is highly reflective of the fact that they need lots and lots of protein in whatever they eat.

Pellets for Bettas are generally fine. However, if you really want to give them the very best, make sure to feed them a steady diet of frozen and live foods. We’re talking about stuff like bloodworms, brine shrimp, mosquito larvae, white worms, insect larvae, and more.

The best way to feed your Crowntail is to give them a good variety of things. Always research not only the products you’re purchasing to feed your betta, but also where those products are coming from.

Crowntail can make for a wonderful addition to your home. They are a vastly rewarding, wholly unique companion.

How Often do Cichlids Have Babies? (Here is The Answer)