Despite the silly name, betta fish dropsy is in fact a very serious condition. The symptoms can be unpleasant at best for your betta. Dropsy can ultimately prove to be devastating, and this is particularly true if you fail to catch what is commonly and mistakenly referred to as a disease.

While not a disease in the specific sense of the word, dropsy nonetheless can mean your betta is not in the best of the health. By being able to correctly identify dropsy symptoms, which will then give you the ability to take advantage of the various dropsy treatment options that are available to you.

If time and diligence are in your corner, the chances of recovery are in fact quite high.

Let’s start by understanding what we’re talking about, when we talk about dropsy in the first place.

One of the most frustrating things about dropsy is that there is no one specific thing that can cause. Conditions are established through the presence of gram-negative bacteria. There are a number of different causes that have been pointed to as a primary. However, dropsy ultimately seems to be a condition that can come from a range of sources.

Another thing we know for certain is that dropsy is extremely rare in healthy bettas. To put it another way, dropsy becomes a dangerous possibility for betta fishes with diminished or compromised immune systems.

Several factors can create such a weakness. Understanding the value of maintaining the best possible tank conditions is going to carry you a long way. We’re going to cover that. However, for the moment, let’s take a closer look at the most common symptoms of dropsy to watch out for.

It cannot be stated enough times that when it comes to seeing how to treat dropsy in bettas, a speedy response is absolutely vital.

How Does A Betta Fish Become Infected With Dropsy?

Another frustrating thing about dropsy is how slowly it sometimes spreads. In some cases, your betta can have dropsy for a while, before they ever show any of the symptoms we are going to discuss.

Dropsy works at slowly making its way into the scales of your betta. When this occurs, their entire inner workings can be impacted. Causing harm to both the kidneys and liver, dropsy also leads to fluid retention. This in turn creates the bloated betta stomach that has long been associated with this condition.

As you might imagine, this fluid buildup can make your betta very unhappy. Besides the fact that it can shorten their lifespan, particularly if it is left untreated, dropsy can also make your betta uncomfortable. They will swim and eat less, which in of itself will contribute to a decline in their health. You can see by now how easy it is for dropsy to shift from a minor infection to a life-threatening situation. 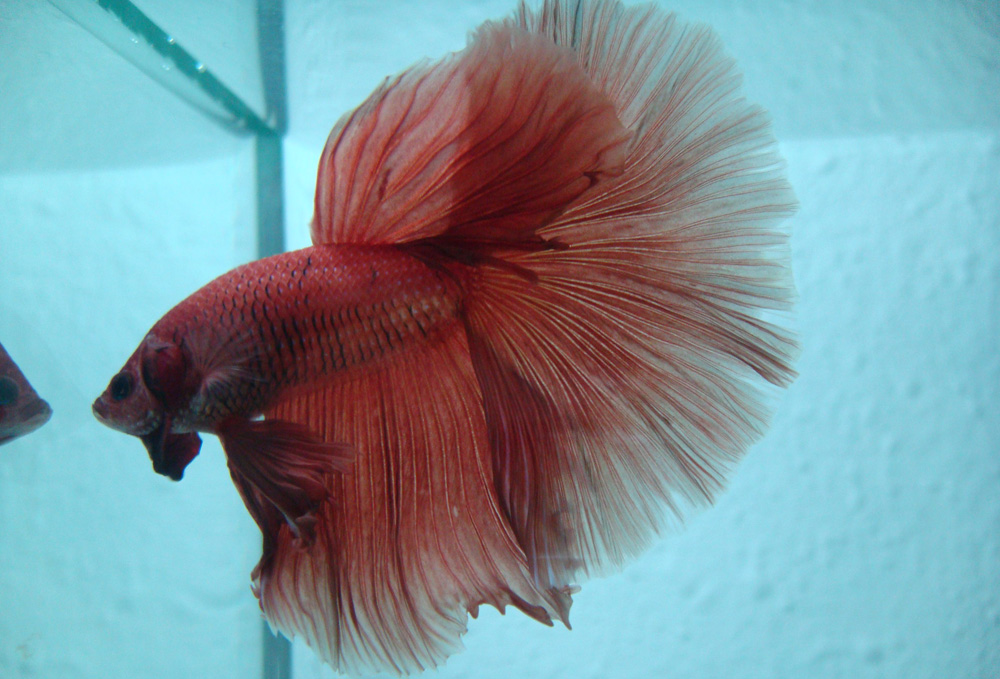 What Are The Symptoms Of Dropsy In Bettas?

If you already know what edema in human beings can look or feel like, then you have a rough idea of what dropsy looks and feels like for your bettas. Arguably the most notable physical symptom of dropsy is the presence of a bloated belly.

To reiterate an earlier point, dropsy is not a disease. It is a bacterial infection that can be created by certain conditions. In fact, the symptoms of dropsy are in fact the underlying symptoms of a more serious situation. This means that if you treat the situation, the infection will go away. Furthermore, through consistent aquarium maintenance and care, you will insure an extremely likelihood of dropsy never returning either.

Here are the main symptoms you need to watch for.

What Are Some Of The Earliest Signs Of Dropsy?

Early detection of dropsy can prove to be a little tricky. However, with a careful, trained eye, you can spot some potential red flags, before they amount to something deadlier:

First of all, look to their appetite. This is almost always where you can figure out if something is wrong. Just keep in mind that a poor appetite does not automatically mean your betta has dropsy. Poor appetite is connected to many of the diseases and infections which threaten your bettas. If this is the only symptom you’ve noticed so far, there isn’t a lot more that can be done, beyond simply keeping an eye on them.

You do NOT want to begin a dropsy treatment, until you are extremely certain that this is what your betta has. Treatments can be harmful, if there is nothing to actually treat.

Is your betta avoiding other fish? This is another possible warning sign. Again, this is another early symptom in which the presence of this behavior is not a guarantee that an infection is present. However, if you combine this with low appetite, the odds are going to start to climb a bit.

If the betta is not only hiding from other fish, but tends to prefer to stay in just one place, then you are definitely looking at a potential case of dropsy. If you take all three of these early symptoms, you will have a betta with a very high probability of having dropsy.

Even so, all of these symptoms can still be indicative of something else. Let’s break down the more serious symptoms you should appreciate in greater detail.

What Are The More Serious Signs Of Dropsy?

If your betta is expressing all three of the early warning signs we covered above, the most infamous symptom, the bloated belly, is likely to appear soon after. You can expect to notice the appearance of this bloating roughly two to three days after the early symptoms have become apparent. Yes, treatment is still well within the realm of possibility at this point, but it does get more challenging.

The stomach is going to look swollen. This is a clear sign that your betta has dropsy.

Like many other diseases and infections with betta fish, you are also going to want to pay attention to the scales. If you have heard the word “pinecone” in association with the physical symptoms of dropsy, then should have a pretty clear idea of what we are talking about. There is a reason why this is perhaps the most well-known of all the symptoms we’re discussing right now. When you see it on your betta for the first time, prepared to be shocked, as it is quite distinctive. The name comes from the fact that all of its scales are sticking out, similar to what you would have with a pine cone. By far, the worst part at this point is the somber knowledge that effective treatment becomes far less likely.

The Importance Of Dropsy Prevention In Bettas

Obviously, still do your best to get your betta back to good health, but understand the value of everything we have covered thus far. It is designed to give you a foundation that will hopefully prevent things from getting to this stage in the first place.

You should also pay attention to the gills. If their appearance lacks in color, resembling a more pale appearance, then your betta may have dropsy. Bulgy eyes and a red, bulgy anus can also be indicators that your betta is retaining a dangerous amount of fluid. A curved spine can also be a strong indicator, as well as a betta that is seemingly reluctant to swim to the bottom of your tank.

With a clearer idea of the symptoms you are trying to spot, you now have a firm foundation to learn about treatment options. While dropsy can be hard on your bettas, you’re going to be pleased to find the treatment path is pretty straightforward. What you want to do is make sure you get started from the first moment you know your betta has dropsy.

What Are My Dropsy Treatment Options For Betta Fish?

Let’s go through all the steps involved in how to treat betta fish for dropsy:

This is regrettably something many people forget to do!

As we mentioned before, dropsy treatment will probably involve aquarium salt (do NOT use table salt, as it is NOT the same thing!) and antibiotics. Because of this, your water should be changed out every single day. This won’t take long, as it is only a 5-10-gallon tank, but it must be kept in mind.

At this point, you should have all the information you need. As we mentioned before, efficiency is the key to successfully treating the condition. In other words, if you notice all three of those early warning signs of dropsy in your betta fish, then you can almost certainly move on to exploring treatment options. It is highly unlikely that if your betta fish isn’t eating, and prefers to hide and avoid other fish, they have dropsy.

With the tips covered above, you’re on the right track to help your betta get better.