Betta Fish Popeye: Treatment, Causes & How to Identify this Disease 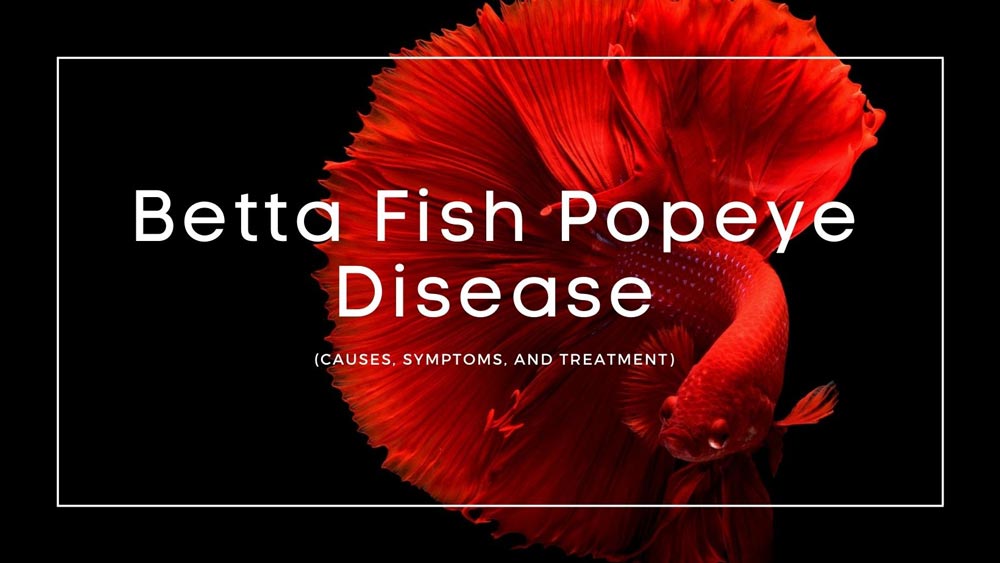 Don’t let the cute name fool you. Despite sharing a name with a beloved cartoon icon, Popeye is no laughing matter in the context of your betta fish. While the condition is not inherently deadly, it can make things quite unpleasant for any betta which catches it. Popeye is also complicated by the fact that it can lead to other problems.

In other words, if you are just beginning to learn about Popeye, here is the most important thing to keep in mind: You want to deal with the problem as quickly as possible. Again, Popeye treatment is fairly straightforward, and it comes with a huge success rate. Nonetheless, as is the case with many other betta fish infections and diseases, a rapid response on your part is the most essential component to treating it effectively.

The other good news about Popeye is that it’s fairly easy to diagnose. It is unlikely that you’re going to be wrong, if you even suspect your betta fish has this condition in the first place.

Also, keep in mind that while Popeye in of itself is fairly easy to treat, it could be in of itself a sign of a more serious condition. To that end, we would suggest reading up on common betta fish diseases and potential treatments.

Let’s take a closer look at what we’re talking about, when we talk about Popeye and betta fish.

What Is Popeye In Betta Fish?

First of all, let’s get that name out of the way.

Popeye is exactly what it sounds like. It is a condition that can cause the eye of your betta fish to stick out, protrude, or “pop” out. Hence the name. While it can be fatal, if left untreated, there are thankfully a number of measures you can take. However, at the end of the day, prevention is considered to be the wisest course of action.

Avoid the conditions by which your betta fish can get the infection, and you really shouldn’t have anything to worry about.

Next, we’re going to discuss some of the most prominent symptoms to watch out for. 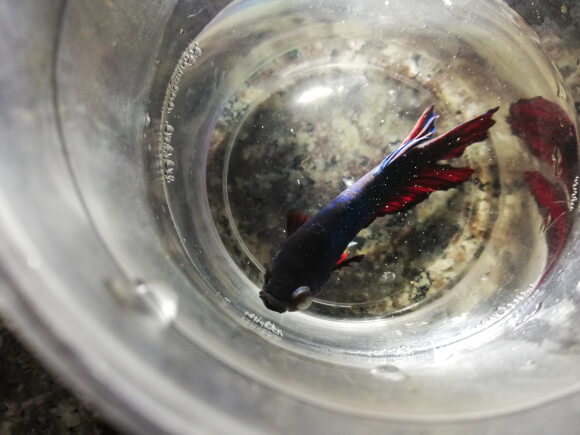 What Are The Symptoms Of Betta Fish Popeye?

Popeye can be extremely uncomfortable for your betta fish, as you might be able to imagine. This, combined with the very real potential for death with untreated Popeye in bettas, makes learning about the different symptoms an imperative.

Here are the most common betta fish popeye symptoms:

Betta Fish Popeye in One Eye

We’ve already touched on this particular symptom, but it is well worth mentioning again. Popeye can only impact one of their eyes, but it is not uncommon to see a betta fish suffering from this infection with both eyes protruding. This is the definitive symptom of this particular infection. If one or both of the eyes are sticking out, your betta fish DEFINITELY has Popeye.

While the protruding eye is the most common symptom, there are a few more you want to look for. The presence of a different eye color is a good example of what we are talking about. If you see a cloudiness, or a milky texture, within their eyes, there is a good chance that one of their corneas has been broken. It could also simply be bloodstained. This can indicate physical aggression in some form or fashion.

Have a White Ring Around Them

This is another certain sign that your betta fish has Popeye. This is a good symptom to watch for prior to the eye popping out. If you notice this white ring, then there is an excellent chance that your betta fish is in the beginning stages of Popeye. At this point, treatment is all but guaranteed to be successful. 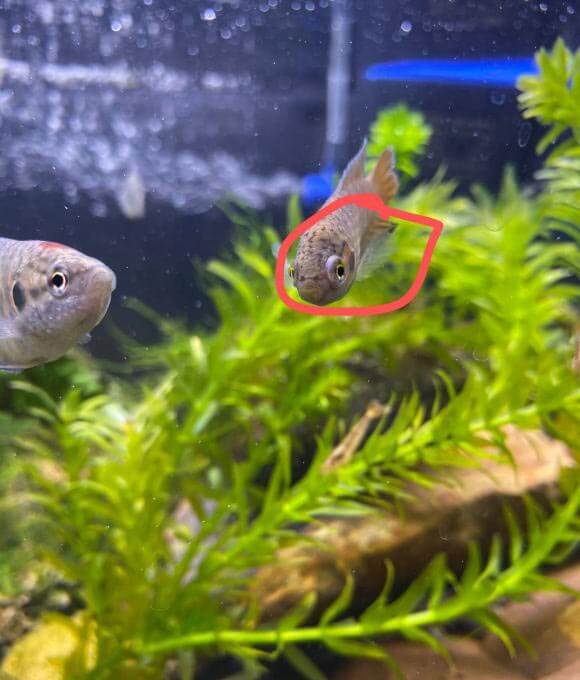 Popeye Caused By Infection or Diseases

There are a number of additional Popeye symptoms you are going to want to keep in mind. However, these should be taken with a grain of salt. This is simply because they could be indicators of any number of infections or diseases. This is why it is a good idea to keep an eye on your betta fish, as soon as you recognize something about their appearance or behavior that seems off to you.

Obviously, if your betta fish is feeling stressed out, or happens to be fighting some sort of infection, other health issues are likely to emerge. If you notice that your betta fish is no longer eating or interacting with other fish as it should, then there is a good chance that at least something is wrong. It may or may not be Popeye, but you’re definitely going to want to keep an eye on your betta fish for the next few days.

Another red flag comes in the form of a betta fish that doesn’t seem to do anything but stay in one place.

With all of this in mind, you’re much closer to knowing how to treat betta fish popeye.

However, once again, prevention is in fact the best way to ensure your betta fish never have to deal with Popeye. The best way to tackle this end of things is to study up on causes. The more you know about these possible causes, the easier it will be to see how to prevent Popeye in betta fish.

How To Cure Betta Fish Popeye?

Determining the cause of Popeye in your betta fish can be a bit difficult to do, in terms of pinpointing the exact cause. This can make treatment a little challenging, but still by no means impossible. This also points to what we were saying about earlier about prevention ultimately being easier and more effective than treatment.

Still, keeping that eye towards prevention, it can be very helpful to at least know some of the most common Popeye causes in betta fish.

These causes can be broken down into two distinct categories, which can serve to make things a little easier for you.

In order to have the best possible understanding of causes, when it comes to Popeye, we need to break things down into two categories: One is unilateral, which only impacts one eye. The other is bilateral, in which both eyes are impacted.

If only one of the eyes of your betta fish is damaged, the odds are low that you’re dealing with an infection. In all likelihood, the damage in question comes from something physical that happened to them. Yes, it is easy enough for a betta fish to cause some form of injury to their eyes. This can be caused by something as simple as bumping into something inside the tank.

By the same token, it can just as easily be something that comes from bullying caused by other fish. If that happens to be the case, then you will want to take the steps necessary to stop the bullying. This may or may not include isolating the abused betta fish from the other fish in the tank.

Now, if both eyes on your betta fish are damaged, this in of itself points to a good chance that your betta fish is dealing with some sort of infection. Such an infection can come from a variety of sources, including bacteria, fungus, and parasites. The best way to figure out which disease or infection your betta fish is suffering from is to look fore other symptoms. Click here for an article that can get you started in the right direction.

At this point, we can start to deep dive into exactly what your options are for treatment. We will also revisit the merits of prevention one more time with some specific suggestions.

Luckily, if you are only dealing with Popeye caused by physical harm, both the treatment and your prevention measures are going to be easy to address. To reiterate, treatment should be started as soon as possible.

At the same time, it is worth noting that this form of Popeye in betta fish is traditionally not fatal. If the stress becomes too much, however, your betta fish can potentially suffer in other fashions.

Here is what you’ll need to do:

You also have the option of aquarium salt. This comes with the built-in, long-term benefit of improving the immune system of your betta to a meaningful degree.

As we said before, a case of bilateral Popeye points to the strong probability that your betta is fighting some sort of bacteria, fungus, or other problematic disease. The treatment method you choose with eventually have to keep this fact in mind.

Here are the basic steps behind dealing with bilateral Popeye: 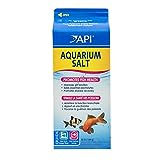 How To Prevent Popeye In Betta Fish

Prevention comes down to keeping in mind the two main avenues of what causes Popeye in betta fish. The first is an infection, bacteria, or even parasites. The second is damage.

Do not overpopulate your aquarium. This not only forces your fish to fight for resources, but it can create a highly stressful situation for your betta fish. The more fish in your tank, the more poop you’re going to be dealing with. It is also possible for other fish to bother your betta, which can create Popeye in one way or another.

Make sure the water is being changed regularly. This also means having a good filter for your system.

It is also possible to cause damage by scooping them up too quickly in the net, keeping plastic plants & furniture in the tank, or even the sudden turning on of the aquarium lights.

With all of the information above, you shouldn’t have to worry too much. Remember that Popeye can be transferred from one fish to the next, if we are talking about an infection-based example.