Aquarium Salt for Betta: How Can It Help Bettas?

Aquarium salt for betta can make the difference between life and death. However, in other situations, it can be highly problematic to expose your betta fish to this product. This is certainly another example of betta fish care essentials in which research and a careful eye are absolutely essential.

Let’s start with a breakdown of exactly what aquarium salt is. From there, we can look at the different situations in which it might be a good idea to give some to your bettas. All of this information can help to better understand why it is so important to maintain the proper aquarium salt dosage.

What Is Aquarium Salt? What Is So Special About It?

At first glance, aquarium salt may not seem all that different from regular salt. The truth of the matter is that they are the same, when it comes to the chemical formula. Both maintain the 1:1 ratio of chloride and sodium. So, why not just give your betta fish regular table salt?

Aquarium salt is not just a marketing ploy, in which the word “Aquarium” is simply slapped on the package. It differs from regular salt on the crucial level of not having the same additives that are traditionally added to the salt you put on your food. Remember that table salt includes stuff for flavor, coloring, and more.

At the end of the day, regular salt can be highly harmful towards the water quality in your tank. Also keep in mind that aquarium salt, among other benefits, works at replenishing the natural electrolytes your bettas need to be healthy. Regular salt does not do that.

Marine salt should also be avoided, for the same reason that it contains additives that can harm bettas.

Where does aquarium salt come from? Evaporated sea waters. It really is that simple.

Let’s take a look at not only some of the most common diseases treated with aquarium salt, but some of the larger benefits of including it in your tank.

Can You Use Aquarium Salt for Betta Fish?

While the aquarium salt benefits for bettas can make for a long list, there are also situations in which you should seek alternatives:

Do you have any scale-less fish?

If you do, they should not come into contact with aquarium salt in any form or fashion. Consider the slimy coat which can be found on their bodies. Without this coat, which aquarium salt can strip, they become susceptible to a range of external infections.

Do you have living plants?

Live plants are a great addition to your aquarium. They are also fragile to an extent. Some can be damaged severely by the inherent salinity of aquarium salt.

The best decision is often quarantining your betta. This is going to involve a few steps, but it generally becomes the best arrangement for all concerned.

Betta quarantine is a particularly good idea, if we’re dealing with something that can be transferred to other fish in your tank.

Barring the above situations, you shouldn’t have anything to worry about. Just remember that the directions for any aquarium salt product should be followed to the letter. Too much of this substance in your tank will not only negate its beneficial elements, but it will potentially be disastrous for all of the fish in your tank.

Nonetheless, overall, the benefits of aquarium salt are absolutely fascinating. You can apply this thought to the subject of whether or not you should regularly dose your aquarium with this specialized salt.

What Are Some Of The Diseases Salt Can Cure?

Under the right circumstances, aquarium salt can be invaluable towards treating a number of serious conditions. Other medications are available. However, aquarium salt is not as serious a treatment option, so it’s often a good, relatively safe place to begin addressing an issue.

Here are some of the most common conditions that can be potentially treated with aquarium salt:

Clearly, aquarium salt is something that can prove to be a lifesaver in many situations facing your betta. However, you are also going to want to take care to ensure it is exactly what your betta needs. Before we discuss the benefits of aquarium salt, let’s examine times in which your betta should not be exposed.

What Are The Benefits Of Aquarium Salt?

One of the more common betta fish topics involves using aquarium salt to do more than treat specific conditions. Some, including many experts, believe it can have ongoing benefits. This again means adhering to a very minimal daily dosage, but it could allow your bettas to enjoy the following:

Parasites will be miserable

There are a range of parasites that can infiltrate your tank, attack your bettas, and cause all kinds of problems. Keeping a clean tank will go a long way towards keeping these pests out. However, it is ultimately almost impossible to have a 100% parasite-free tank at all times. Aquarium salt can keep them from ever even reproducing.

Methemoglobinemia is a blood disorder which can be caused by an abundance of nitrates and nitrites in the water in your tank.

Better for coats, gills, and even kidneys

Treating your aquarium with this salt has been shown to improve the functionality of your slime coat. As we mentioned before, this is the coat that protects your fish from getting sick. Aquarium salt can also make your bettas more efficient at using their kidneys to remove water from the body. This also applies to the gills, which should never absorb too much water.

How To Treat Your Bettas With Aquarium Salt

Keeping in mind that you should probably quarantine your sick betta with what is known as a hospital tank, if you’re using aquarium salt to treat something specific, here are the steps to remember, regardless of whether or not you do that.

This entire process can be repeated on and off for two weeks. After that, if your betta has not improved, their condition is more serious than previously thought. You are going to need to seek out stronger methods of treatment for your betta.

Now, while the above treatment strategy is the one most commonly used, you are not without further possibilities using aquarium salt. There is a method known as salt bombing. Under the right conditions, this can be a powerful way to aid your betta.

How Much Aquarium Salt for Betta Fish?

This can also be called a salt blast or salt bomb. As any of those names imply, you’re giving your betta a significant dose of aquarium salt over an extremely short period of time. This should not be attempted as your first approach to improving the condition of your betta.

It should be reserved for situations in which your betta’s condition is more advanced, but you also don’t want to progress to a treatment stronger than aquarium salt. You also need to have everything set up ahead of time. Don’t forget that we are only going to expose your betta to this concentrated dose for a very short period of time.

After you’ve set your containers up, heat your water up to somewhere between seventy-eight and eighty degrees. Put your betta fish in a plastic bag. With this done, your betta can be added to your first container for approximately ten to fifteen minutes. This is meant to get them used to these new, temporary conditions.

Take them out of the bag after fifteen minutes at the most. You can now leave them in the first container for anywhere from five to eight minutes. It is strongly advised that you only go to the eight-minute threshold when treating something serious in your betta. To reiterate, prolonged exposure to these extreme conditions can kill your betta.

You don’t want to shock your betta by adding them straight from the first container to the main aquarium. This can also kill them. The second container exists to make the transition as easy as possible. You only need to leave them in this container for around five minutes.

Once you have finished with this stage, you can safely have them returned to the main tank. Put them in another plastic bag, and allow them to float along the top of the tank. You shouldn’t need to do this for more than a few minutes.

Clearly, aquarium salt can be a vital part of your day-to-day care for your betta fish. As long as you maintain the proper dosages, and keep in mind everything else we mentioned above, your betta can gain a lot from aquarium salt. Whether you need to treat something in particular, or want to use it to maintain an optimal tank, make it a point to keep some in your home. 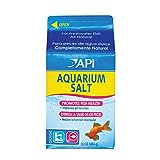