Although the Honduran Red Point Cichlid is less famous than its close cousin, the most sought-after Convict Cichlid, it is no less beautiful or attractive. This rather new pet fish is becoming more and more popular among Cichlid aquarists.

Compared with Convicts, these fish are relatively peaceful, plus their adaptable nature makes them an excellent fish for any aquarist looking to their first foray into the world of Cichlids.

While Honduran Red Points are hardy and less pugnacious Cichlids, there are a few things you should know before you bring them home.

In today’s guide, you’ll learn everything you need to know about Honduran Red Points, from their ideal habitat to their diet and behavior. Armed with this knowledge, you’ll be ready to provide the best possible care for your fish.

There has been much debate about whether or not the Honduran Red Point is a distinct species or merely a color morph of the Convict Cichlid (Amatitlania nigrofasciata), so this species has not been formally described. However, the Honduran Red Point has many particular characteristics; taxonomically speaking, it should be considered an undescribed species.

Its genus Amatitlania only includes nine species but can be further subdivided into several groups, each with very closely related species. The convict cichlid group contains the A. nigrofasciata itself with the other three members.

No matter what you call them, in my humble opinion, the Honduran red point is the most beautiful species in the convict group, which will definitely stand out in a tank.

Honduran red points have a familiar body pattern of Convict cichlids – a stocky oval disk shape with dark blue-green vertical bars, or spots, that run down their metallic green or blue bodies. The coloration varies depending on their mood, age, social status, and even the quality of the water they live in.

Luckily, it’s not difficult to tell the difference between adult male and female HRPs.

Whether African cichlids or new world cichlids, the most reliable way to sex these fish is by venting them, this is definitely an “expert-only” method, so I recommend that you ask your local fish store or experienced aquarist to do it for you.

Despite the debate on whether they’re the same species, it’s generally accepted that the Honduran Red Point is a color morph of the Convict Cichlid. The main difference between the two is their coloration.

Another way to tell them apart is that the Honduran Red Point Cichlid has a quite beak-shaped mouth structure than the Convict Cichlid.

Like other Amatitlania species, the lifespan of the Honduran red point cichlid is around 10 years.

This species is fairly new to the hobby, so there are no reports on its longest lifespan in captivity. Like any other fish, their lifespan is significantly affected by the overall living conditions you provide.

The Honduran red point is a small to medium-sized Central America cichlid. Owning their manageable size, relatively peaceful nature, and stunning looks make them an excellent choice for many aquarists, both beginner and experienced.

Compared to these striking African Cichlids, most Central and South American Cichlids are hardy and adaptable. The Honduran red points are no different. They’re not too fussy when it comes to water quality and conditions.

Here are the fundamental aquarium setting up tips you need to follow:

If you plan on housing them with other smaller cichlids of similar temperament in a community tank, you need to invest in a tank that’s at least 55 gallons (48″ x 13″ x 21″).

As always, it’s better to choose a larger tank over a smaller one.

These fish can tolerate a wide range of water parameters in their natural habitat, but they prefer alkaline and soft waters.

To keep your fish thriving in the home aquarium, you must recreate those conditions closely. Stick to the following water parameters.

Poor water quality is one of the main reasons why fish get sick. So take this seriously! It is essential to perform at least 20- 50% of the tank water weekly for the sake of health and disease prevention.

As you know, Many of the Central American cichlids are eager excavators by nature. So, when setting up their tank, make sure to include a sandy substrate with plenty of caves and hiding spots to make them feel comfortable, as well as enough open areas for swimming on. You can achieve this by using driftwood, rocks, and terra-cotta pots.

Root plants are not a good idea as they can quickly uproot by these fish. However, some floating plants can work to diffuse the light and create a more natural-looking environment.

As for aeration, it is unnecessary, but adding an air stone will help increase the dissolved oxygen levels. 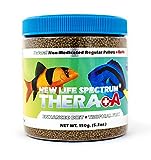 Blue Convicts are opportunistic omnivores and not fussy eaters.

In the wild, they feed on a variety of foods, including small fish, crustaceans, insects, worms, and plant matter.

In captivity, they will accept most commercial Cichlid pellets and flakes. It’s necessary to provide them with a high-protein diet for optimal growth and coloration, such as brine shrimp and bloodworms, but feed them periodically.

You should also supplement their diet with algae-based foods and vegetables like zucchini, broccoli, and peas.

The Honduran red point is considered less aggressive than convict types, which gives you more flexibility when it comes to choosing their tank mates.

Having said that, we advise you to house them with other small to medium-sized peaceful Central America cichlids of similar temperament and size.

Note that cichlids are a little more individualistic. Even a peaceful HRP can become aggressive when kept with the wrong species. There are no guarantees.

As far as a pair, here are some possible Honduran Red Point tank mates:

The breeding process is relatively straightforward. Since this species can be pretty shy and need time to get used to the environment, we recommend you set up a separate tank for breeding. The ideal size of the tank should be at least 30 gallons.

To induce spawning, you can raise the water temperature to 80-82°F and perform large water changes of about 50% weekly. Don’t forget to feed them well with a high protein diet.

When they are ready to spawn, the female will lay around 50-70 eggs on a flat surface. The male will then fertilize them. After that, both parents guard the eggs until they hatch, which takes about 3-4 days.

The fry will be free-swimming after another 5-6 days. At this point, you can start feeding them with live foods such as brine shrimp nauplii and daphnia.

A group of juveniles will form strong bonds. If you decide to breed them, make sure to buy fish from reputable sellers to maintain a good line. Fish bred by a subpar breeder is more likely hybrids created by crossing Honduran Red Points and common Convict types.

The Honduran Red Point is a beautiful and relatively peaceful cichlid that makes an excellent addition to many Central American biotope tanks. These fish are not too difficult to care for as long as you provide them with the proper environment and diet.

The Honduran red point, or the Blue Convict Cichlid, is mostly available in specialist breeders. They tend to be very moderately priced, with bonded pairs being more expensive than a single fish.

We hope you enjoyed reading this article, and please feel free to share it with other cichlid enthusiasts! If you have any questions or comments, please don’t hesitate to leave us a message below. We’ll get back to you as soon as we can.