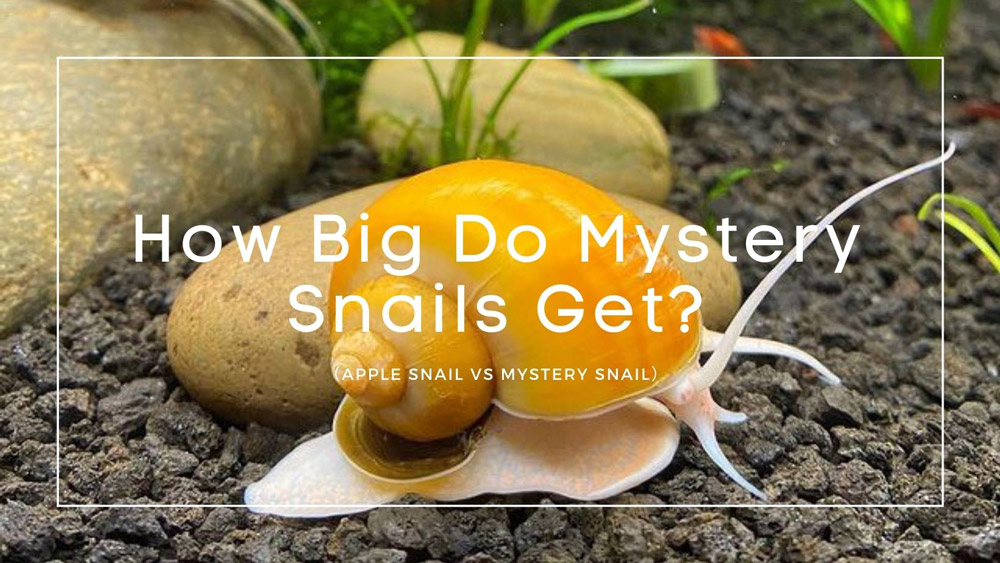 Most aquarists and hobbyists would agree that they prefer keeping mystery snails in their tanks because of their colorful shells and algae-eating abilities.

As such, mystery snails have become very popular over the years. Now, people owning mystery snails often wonder why they are getting so huge? And if you are one of them, you are at the right place.

In this article, we will be learning about how big do mystery snails get. So, without any further delay, let’s jump right in!

How Big Do Mystery Snails Get?

Mystery snails, also known as Pomacea Bridgessi, are one of the largest freshwater snails out there and can grow up to a diameter of 2” and more. They are peaceful and absolutely safe with plants, shrimps, and non-aggressive fishes.

As far as their food is concerned, it mostly consists of rotting and dead plants. Mystery snails have a bit of an appetite and can grow in size quite quickly if fed well.

You might be surprised to know that young mystery snails can double in size in just a few weeks.

Why Are My Mystery Snails So Huge?

Mystery snails grow all their lives, but the rate slows down quite a bit when they’re about to become mature. Besides the growth rate, there are many other reasons.

It Could Be Other Apple Snail Species

One of the reasons your snails are getting huge is that they are probably other apple snail species, most likely channeled apple snails. Often referred to as golden apple snail, they have a reputation for having a voracious appetite for water plants such as taro, water chestnut, and lotus.

Channeled apple snails can grow up to a diameter of 10 cm and they are known to pose a serious threat to wetlands all across the world. They are native to South America and are mainly imported by other countries for food and the development of aquaculture projects.

Furthermore, they can be developed as aquarium snails as well and are often sold in pet stores. So, if your snails are huge, there’s a high chance that they could be channeled apple snails and not mystery snails.

You must note that all mystery snails are a species of apple snails. The apple snail family is huge and consists of different species, one of which is mystery snails. Some of the other popular species include four-horned snails, and golden Inca snails. So, let’s take a closer look.

The Generic Apple snails are typically larger than mystery snails and feed on both plants and algae. They are mostly sold in pet shops and are often referred to as the black mystery snail or the spike topped apple snail.

Apple snails use both lungs and gills for breathing, making them stand out from their other species. They grow up to 6” in diameter, almost the size of a tennis ball, which makes them one of the largest freshwater snails.

To pet them, you need to keep them in a large, plant-free aquarium, where you can feed them lettuce. Moreover, you need to maintain a temperature above 60 degrees Fahrenheit, meaning they are not suitable for planted tanks or cold ponds.

Also, despite their humongous size, they are often bullied by medium to large-sized fish, so we strongly recommend keeping them in a species only tank or with non-aggressive fish.

These snails are gold in color and are found in aquariums for their eye-catching colors. They mostly feed on plants but can also feed on algae when there’s no plant available. If taken care of properly, they live for up to 1 year.

As far as their size is considered, they can grow to around 3” in diameter, which again makes them a perfect fit for aquariums. And like most apple snails, golden Inca snails are peace-loving and should not be kept in the same tank as aggressive fishes.

Four-Horned snails are large, semi-tropical creatures that belong to a species of apple snails. But they are mostly famous for laying many eggs during summer.

When it comes to their food, they mostly feed on water plants. However, when there is a shortage, you can feed them algae. Unsurprisingly, with such a ravenous appetite, they can grow up to several inches in diameter.

Mystery snails have the most diverse colors of any apple snail species because of selective and captive breeding over the past couple of decades. From ivory to purple, they are available in almost all popular colors.

They also grow up to 2” in diameter and feed only on algae and dead plants. All these features naturally make them a top choice for aquariums.

Keep in mind; they shouldn’t be kept with aggressive fish like goldfish because they are always at risk of being bullied due to their quiet demeanor.

How Fast Do Mystery Snails Grow?

If you provide them with proper water conditions and food, baby mystery snails can grow very fast in a matter of weeks. They keep growing throughout their lives, but the rate of growth, of course, slows down when they are near maturity.

So, that brings us to the end of this article; hopefully, it has helped you gain important insights into the size of mystery snails.

But regardless of how big they are, you should always give them food from time to time and maintain proper water conditions. On that note, it’s a wrap. Hope to see you soon!

Cuttlebone for Snails (Is It Safe & How To Use It?)
Mystery Snail Poop: Are They Eggs or Just Poop?
Dead Mystery Snail: Is it Dead or Just Sleeping?
Calcium for Mystery Snails (Find the Best Sources)
Apple Snail Vs. Mystery Snail (What Is The Difference?)