How Big Do Rainbow Sharks Get? (& How To Make Them Grow Faster!) 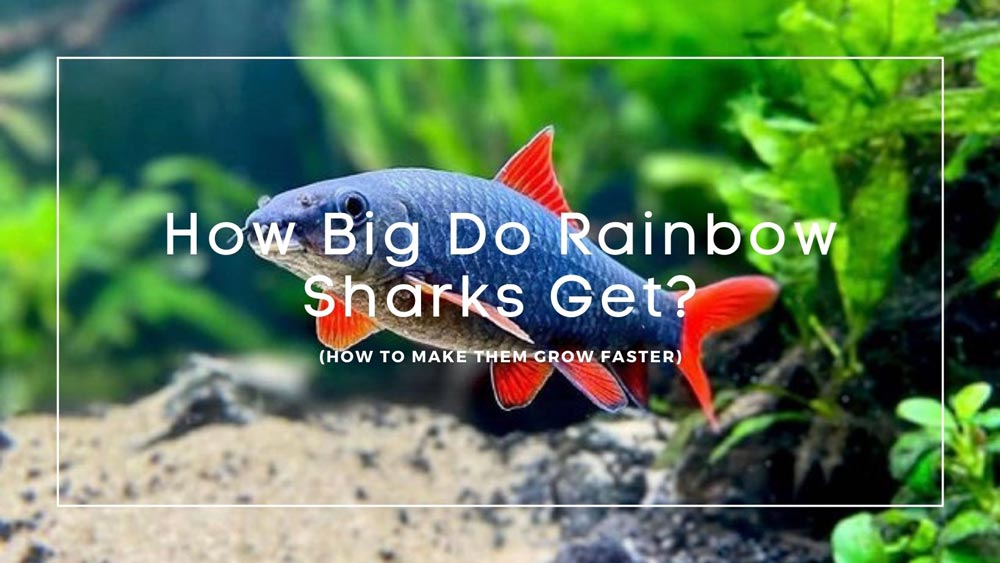 If you need a single fish to make your aquarium stand out, the rainbow shark is just what you’ve been looking for. With their vibrant red fins and aggressive territorial nature, these little sharks will be sure to add some splash of color and spice up any tank with an attitude of their own!

If you’ve just brought home a beautifully colored rainbow shark or are considering getting one, there might be a question looming in your mind – how big do these sharks get eventually?

So without further delay, let’s get started!

How Big Do Rainbow Sharks Get?

How Fast Do Rainbow Sharks Grow?

Rainbow Sharks grow pretty fast in the first year, then tapers off. My lovely red queen was 2″ when I bought her from the LFS 11 months ago and is now just over 5″. It seems to be growing at a slower rate. I have learned that it takes 2-4 years for a rainbow shark to get the full size by providing it with the proper care and diet.

The best way to help your rainbow shark reach their maximum growth potential is simply by giving them the proper care and diet.

Diet is playing a most important part in your rainbow shark growth. As an omnivore, they are not particularly picky eaters in nature- generally eating decaying plants, algae, insect larvae or small chunks of meat that can be found in rivers such as Zooplankton.

Rainbow Sharks can eat flake food, frozen foods, pellets, and vegetables without complaint in an aquarium, but how do you make sure your shark gets all the nutrients he needs? To keep them happy in your aquarium, you need to offer various foods just like they would have access to if they were out in the wild. It’s not enough just feeding him canned corn-they need something more than vegetables from time to time too!

Feed them veggies in their diet, which will keep their immune system strong, include:

Veggie chips are not recommended. It can grab ahold of a fish leading to death. I have tried to shred and blend the veggies up and then freeze them into individual servings in ice cube trays. It works for me!

If you want to give your rainbow shark a brighter coloration, try to feed it a high-protein diet, such as good insects or crustaceans, include:

Make sure you don’t overfeed your rainbow shark, a few times a week would be fine. Feed them only what they can eat in a single meal and never try to make up for missed meals by feeding more food!

Juvenile Rainbow Sharks are a true treasure in the aquarium trade. They come with great colors and amazing shapes that make them one of the most sought after fish species. One thing to keep their colorful scales vibrant is never to restrict food intake, so it’s important to make sure your juvenile sharks’ diet be varied from time to time, or they will end up stunted and lacking color expression!

When starting as an aquarium hobbyist, you always want to find the perfect tank size for your fish. Have you heard the typical “one inch to one gallon rule” in the community? Honestly, I consider the rule is very bogus and misleading. Imagine a 6″ adult rainbow shark in a 6 gallon tank. That would be a disaster.

The truth is rainbow sharks require a minimum of 55 gallons, and an aquarium of that size is suitable for one single rainbow shark. Don’t bother with the tanks smaller than 55 gallons, as mentioned above, rainbow shark grows fast in the first year and the aggression will come with age. Once reaching maturity(3 inches), it gets very aggressive overnight and started attacking the community fish. So stick to the recommended minimum tank size: 55 gallons. The long tank would be better.

For fish keepers who plan to introduce more than one rainbow shark, a 130g+ tank (at least a 6 foot long) can make sure each has at least a meter of separated territory. They will fight for control over their territories and inevitably injure themselves in the process.

The best way to take care of your rainbow shark is by providing it with an environment that mirrors the conditions in its natural habitat.

A healthy, thriving environment can affect how well your rainbow shark will grow. Before introducing a rainbow shark to a new tank, make sure the tank is fully cycled.

The water temperature for your shark should be between 72 to 79℉, their prefer pH neutral waters between 6.5 and 7.5 and a water hardness of 5 to 11 DH.

Rainbow sharks are sensitive to pH level, sudden changes in the pH can make them more aggressive than usual.

Water quality is also crucial; be conscientious about algae growths, which will negatively affect fish habitats if left unchecked over time.

Rainbow shark growth depends on a variety of factors. Keeping your rainbow shark in a large tank, providing it with clean water and feeding it the proper diet will help grow to its full potential as quickly as possible. Good luck on growing your sharks into something even more amazing than before!

Do you have any tips for getting your rainbow shark to get big? Share with us in the comments!

Feel free to contact us at [email protected]ity.com and we will get back to you as soon as possible!