How Do Mystery Snails Mate? (& How Often) 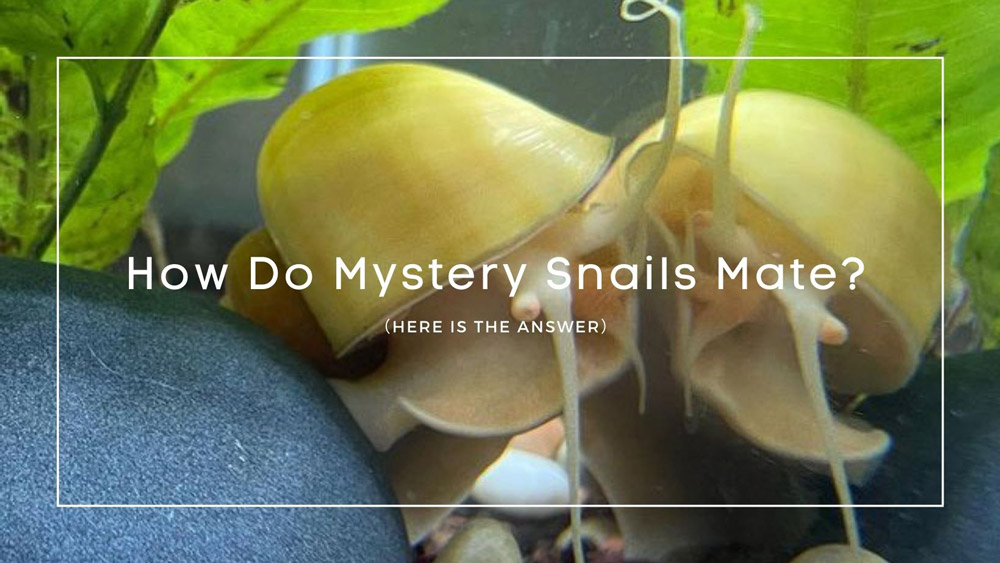 Mystery snails are one of those rare types of snails that aquarium owners love to keep in their tanks. And there is enough reason to do that.

While most snails are hermaphrodites, the apple snails are different. Although they lay several eggs, you can control the birth of young ones by managing the waterline. So, in this read, let us answer your queries about how do mystery snails mate.

While we know that pest snails are generally hermaphrodites and can reproduce rapidly, which causes a sudden population explosion, mystery snails are different.

As one of the most beautiful apple snails species, mystery snails are gonochoristic (separated sexes); they will either have female or male reproductive parts (not both) and will only reproduce after mating. So to successfully breed mystery snails, it’s obvious that you need a male and a female snail.

Is My Mystery Snail Male Or Female?

There have been some speculations about the difference in the shell shapes of males and females. The male shell may have a wider lip than the female one due to the presence of the penial complex. But this is not proven yet.

However, there is one key difference, and you can spot it if you look below the shell into the mantle cavity. If you can spot a penial complex, then it is a male mystery snail. Otherwise, it’s a female.

To find this out, take a snail outside water and turn it over. Blow some air on it, and the snail would want to stretch and turn. When it stretches, you can look inside the cavity and spot the penis sheath.

How Often Do Mystery Snails Mate?

Mystery snails will mate a number of times if given a chance. Male mystery snails are so prone to mating that they may even climb on male snails at times. Moreover, they can leave the female snails with enough sperm to fertilize a huge number of eggs after just a single mating session.

That’s why we will recommend keeping the males and females separately in case you see that they are mating too often. This is because the females can get injured if copulation is attempted too many times.

How Long Do Mystery Snails Mate?

Mystery snails can mate for up to 6 hours at a stretch, and they would be firmly connected to each other during this time. This is also the time for copulation, but you can transfer them to a different place too during the process without bothering them.

In fact, the female snail continues eating and moving around during this process and can go about its daily activities just as normal.

Moreover, if you have golden mystery snails, then you should know that they do not need any external triggers to initiate mating. Once they become adults, they start looking for partners to mate with.

The sex ratio is generally 0.5, which means there are almost the same numbers of male and female mystery snails. This is generally determined genetically, and there could be egg masses that produce only one type.

For example, an entire egg mass can produce only female mystery snails while another can produce male ones. The sex could be dependent on the combination of specific genes.

Let us begin with the male reproductive system, which consists of a penis sheath, penis, prostate gland, penial sac, seminal vesicle, testis, and vas deferens. The seminal vesicle stores the sperms, which only move during mating.

They will then move through the sperm groove to the penial duct, which can be found at the base of the penis. The penis remains in the penial sac until it needs to be erect, and will be then surrounded by the penis sheath.

For female snails, they have their egg cells in the ovaria that is placed above their spine. The egg cells move to the receptaculum seminis, where the sperm is stored after mating, and this is where the eggs are also fertilized. Later, the fertilized eggs move through the egg tube. Ultimately they will leave through the gonopore and then be laid by the females in a dry place for them to hatch.

Can One Mystery Snail Reproduce?

Only female mystery snails are known to lay eggs. In the case of mystery snails, the eggs are fertilized after the mating session, after which the female snail moves above the water level to lay them. The young ones will then be born in a dry spot before they move into the water.

How Do You Know When Mystery Snails Are Mating?

You will generally be able to see a male snail climb over the shoulders of the female snail. Then the male inserts his penis sheath into the female to start the mating process. You can observe the entire process very well by observing closely. And as we already mentioned, you can pick them even during this time without disturbing the process.

Mystery snails can lay around 50 to 100 eggs at a time, and that would mean a huge number of baby snails. Hence, be prepared to place or keep them somewhere.

Also, if you do not want the female snails to lay eggs, then increase the water level all the way to the top of the aquarium. This will eliminate any free space for them to lay their eggs.

On that note, it’s time for us to wrap up today’s guide, and we hope that you know enough about how mystery snails mate. Watch this space for more such reads.

Cuttlebone for Snails (Is It Safe & How To Use It?)
Mystery Snail Poop: Are They Eggs or Just Poop?
Dead Mystery Snail: Is it Dead or Just Sleeping?
Calcium for Mystery Snails (Find the Best Sources)
Apple Snail Vs. Mystery Snail (What Is The Difference?)