How Long Do Clownfish Live? (5 Tips to Increase Their Lifespan) 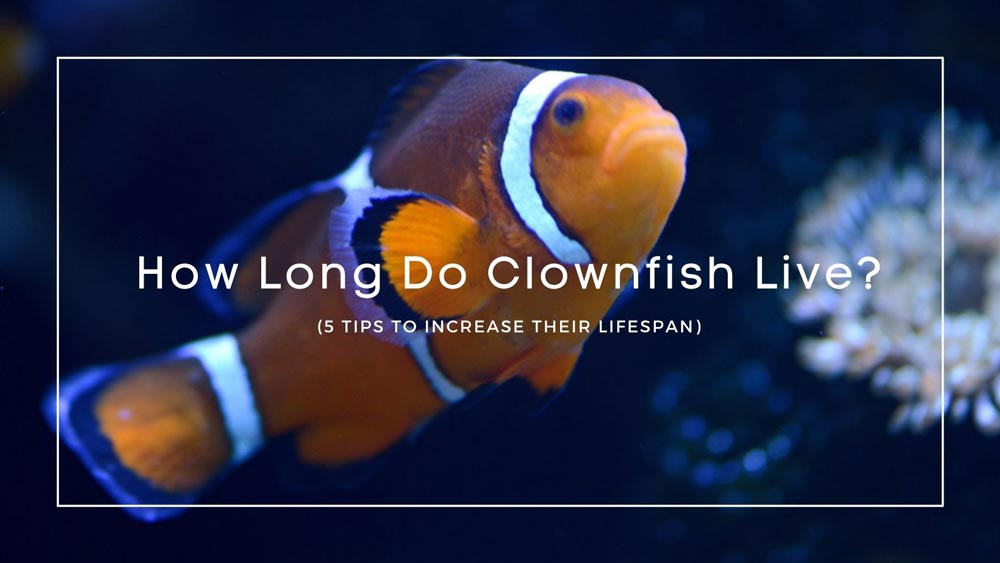 The mesmerizing stripes of the clownfish have made it one of the most popular fishes in the sea.

However, it is a lesser-known fact that baby clownfish aren’t born with these stripes; each stripe appears at a different point in their lives. But do you know how long do clownfish live?

In the wild, clownfish have a special relationship with sea anemones, which help them earn their stripes and possibly extend their lifespan. However, with proper care, you can simulate conditions for clownfish to thrive even in an aquarium.

Dive into the details to find out how!

How Long Do Clownfish Live In The Wild?

When in the ocean, clownfish live among sea anemones. These are predatory invertebrates with stinging tentacles that can kill other aquatic life for food. In addition to food scraps left by the sea anemone, clownfish rely on sea algae and other invertebrates for their diet.
Apart from providing food, the sea anemone also acts as a protective hiding place for the clownfish. Foraging and moving away from its safe-haven means that they are susceptible to starvation. Moreover, they have a stressful existence because of fishers and predators lurking in the sea.

Given their high-risk situation, even the luckiest clownfish live only about 6-10 years in the wild.

How Long Do Clownfish Live In Captivity?

Some species of clownfish are believed to have a long, natural lifespan of over 20 years. Additionally, they have a mucus coat that protects them from toxins released by the tentacles of the sea anemone. This provides them an extra survival mechanism.

However, clownfish in captivity generally live between 3 and 10 years. The stress of being captured and transported is often regarded as the leading cause for their short lifespan.

On the other hand, captive-raised clownfish adapt better and tend to live longer. But even these do not survive when released back into the wild as they avoid sea anemones. Not to mention how husbandry practices usually focus on breeding attractive fishes that are genetically deformed and susceptible to health issues.

This is not to say that clownfish cannot live long. Surveys have shown that some species of clownfish have lived up to 20 years under supervised care. In fact, the fish continued to reproduce at that age, which indicates that they can live much longer.

How Old Is The Oldest Clownfish?

In 2013, two clownfish named Harold and Maude became well-known among aquarists for being the oldest living clownfish in captivity. These Percula clowns were believed to be 34 years old at the time, and were still going strong.

Clownfish can live alone, especially if they have grown up in an empty tank. However, it is recommended that you add a sea anemone to the aquarium if you plan to keep a single fish in the tank.

How Can You Help Your Clownfish Live Longer?

As a Clownfish owner, you must be proactive in the care and well-being of your pet. Though it may seem like there are no measures to take for our little friends’ survival rate, we can make some changes that will drastically increase their chances at living longer than they would otherwise have lived.

Get A Decent Sized Tank

While the Gold Stripe Maroon Clownfish can grow up to 6 inches in length, most clownfish peak at about 3-4 inches. For most species, it is best to start with a 20-gallon tank to allow fully mature fish to swim freely and explore their surroundings without any stress. Perhaps, you may not even have to upgrade to a bigger one in the future.

At most, a 20-gallon tank should be comfortable enough for one clownfish, and 30 gallons for a pair. But be advised that a pair of the same species should include one male and a female. Also, if adding an anemone to the surroundings, you will require at least a 50-gallon tank.

First off, clownfish are saltwater fishes, so adding salt to the tank is indeed a no-brainer. For this, begin with filtered water and add a salt mix until the water has reached the desired salinity.

Keep in mind that saltwater requires better filtration than freshwater, so it is crucial to upgrade mechanical filtration systems. At the same time, you can add live rocks to the tank; these act as natural, biological filters for the aquarium.

Clownfish are native to the Indian Ocean, warm parts of the Pacific, and tropical regions of Southeast Asia. With that being said, they are not acclimated to cold water and prefer to stay in temperatures between 75 and 85 degrees Fahrenheit.

Install a subversive heater to keep the water warm, and use a thermometer to ensure that the temperature remains constant.

Maintain a pH level of 8-8.4, and ensure that the nitrites remain under 0.2ppm at all times. Regular perimeter checks and partial water changes will also help keep ammonia and chlorine levels low.

In the wild, clownfish and sea anemone have a symbiotic relationship, and they depend on each other to hunt for food. However, sea anemones do not have a significant role to play in aquariums – perhaps, with the exception of its aesthetic appeal. Moreover, maintaining these can prove to be more complicated than the clownfish itself.

On the other hand, angelfish, dart fishes, tangs, and wrasses are known to get along with clownfish. But don’t forget to monitor the reaction of the clownfish any time you introduce another fish to the tank. Swiftly remove it in case of any aggressive behavior.

Getting A Balanced Diet

Clownfish are omnivorous, which means that they will eat almost anything that you feed them. A healthy diet would consist of pellets, flakes, frozen, and live food. However, the more important thing to remember is not to overfeed them.

For smaller fish, spread the food around thrice a day and let the clownfish eat for 2-3 minutes. Take out the remaining food, and don’t worry – these fish can survive even a week without eating. For grown fish, two feeds a day will be sufficient.

Clownfish are known for their bright and cheerful colors, and they deserve to live equally joyful lives.

Unfortunately, they are known for not being able to live to their full potential because of their low stress tolerance. At the same time, they are considered an easy pet to keep – provided the owners have done their research.

With that being said, a roomy tank, well-maintained water conditions, suitable companions, and timely nourishment can prolong the life of your clownfish. And, that too, by five or even twenty years – the possibilities with this mysterious fish are indeed endless!