How Many Cherry Shrimp Per Gallon? (Here’s the Answer)

Cherry shrimps are little creatures that don’t require much maintenance.

However, just because they are small-sized doesn’t mean that you can be casual about deciding their population in the aquarium. A few things must be considered while picking the numbers.

And if you don’t have much information on this front, read our guide on “how many cherry shrimp per gallon” to get some idea.

Table of Contents hide
1) How Many Cherry Shrimp Per Gallon Generally?
2) The Number Of Cherry Shrimp For A Tank Depends On
2.1) Aquarium Types
2.1.1) Shrimp Only Tank
2.1.2) Community Aquarium
2.2) Filtered Or Not?
2.3) Planted Vs. Non-Planted
2.4) Tank Maintenance & Water Change
2.5) Other Problems Affect The Number?
3) Final Thoughts

How Many Cherry Shrimp Per Gallon Generally?

Generally, any number from five to fifteen shrimps can be accommodated in one gallon of water, but 5 shrimps per gallon is usually a great starting point. It highly depends on the total number of creatures in your aquarium. But don’t forget, the better your filtration, the more tankmates you can keep.

The Number Of Cherry Shrimp For A Tank Depends On

The number of cherry shrimp that you can keep in your tank depends on the following parameters:

First and foremost, the aquarium type plays a pivotal role in deciding how many shrimps can be placed in one gallon of water. Broadly speaking, there are two main types of aquariums, and we’re going to discuss them briefly.

A red cherry shrimp is three to four centimeters long on average. Its small size could allow keeping dozens of them per gallon. But we also need to weigh in the fact that these aquatic beings are like pooping machines. They generate a lot of excreta, keep munching on algae constantly, and need enough space to run wildly.

In this way, the total count comes down to be somewhere between 7 -10 shrimps per gallon in a shrimp-only tank.

These aquariums are basically designed to keep multiple species of fish, shrimps, and other water creatures. In simple words, it contains vast species that are geographically separated and do not commonly occur together in nature.

Now, two factors come into play in this type of aquarium. First, the total number of tank mates dramatically increases, and second, they get diversified. Meaning, you’ll also have to consider the friendliness or hostility of these species towards each other while distributing the space.

Considering these parameters, you’ll have to restrict your cherry shrimp count to only 3-5 individuals per gallon in a community aquarium.

Let’s face it that naturally and biologically filtered fish tanks are extremely difficult to sustain. Unless the tank is pretty heavily planted, shrimps won’t grow with their full potential and ultimately won’t survive without a filter.

There are tons of benefits of using a bio-filter in your aquarium. A few of them are:

If your tank is unfiltered, keeping more than 3 shrimps in a gallon of water is not safe. However, if there is proper filtration, the count can be increased to 5 or 7 per gallon.

A “non-planted” aquarium doesn’t mean that the plants are completely absent because that’s really not possible. Every tank needs to have at least some sort of live plants to remove nitrogenous waste, oxygenate the water, create food, balance and keep the ecosystem going. It’s just that the entire focus is on the creatures living in it and not the plants themselves.

On the other hand, a “planted’ aquarium is dominated by a lot of moss or other plants, and wood can provide hiding places for cherry shrimps in your community tank – they are vulnerable after molting!

In a non-planted fish tank, you can keep about 10-15 cherry shrimps, but in a planted one, we recommend not going above 8 because of the spatial constraints.

If you have the time and patience to clean the tank and change the water every other week, then you can keep as many shrimps as you want. Just make sure they lie between 15 and 20.

However, for those who have a busy lifestyle and cannot make much time to focus on tank maintenance, it is best to limit the shrimp population below ten.

Other Problems Affect The Number?

Whatever goes on inside the tank is bound to have some influence on the number of shrimps per gallon. That is why an aquarium is known to be an independent ecosystem of its own, in which everything affects everything.

Water parameters decide the overall health of the tank, and that must be top-notch if you want your aquatic friends to survive in higher numbers. The qualitative aspect of water cannot be compromised when you have an overcrowded aquarium.

The temperature should be on point with little to no fluctuations, and the introduction of new and foreign tank mates should be kept to a minimum.

In contrast to that, when you have a sparsely populated tank with only a limited number of shrimps, you have a wider scope of altering the parameters. In this case, you don’t need to be too stringent with everything.

And that’s about it for this guide. Picking the right number is essential for the overall growth and survival of your shrimps. It is an important deciding factor that you must consider while setting up your aquarium.

If your shrimps have suddenly started dying, then take a look at the numbers. Everything is connected to that. 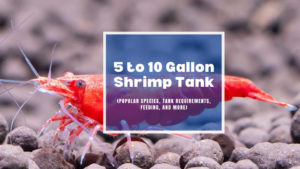 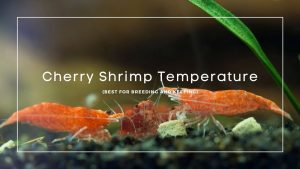 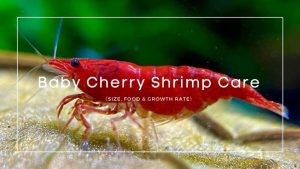