How Many Ghost Shrimp Per Gallon? (Here’s the Answer) 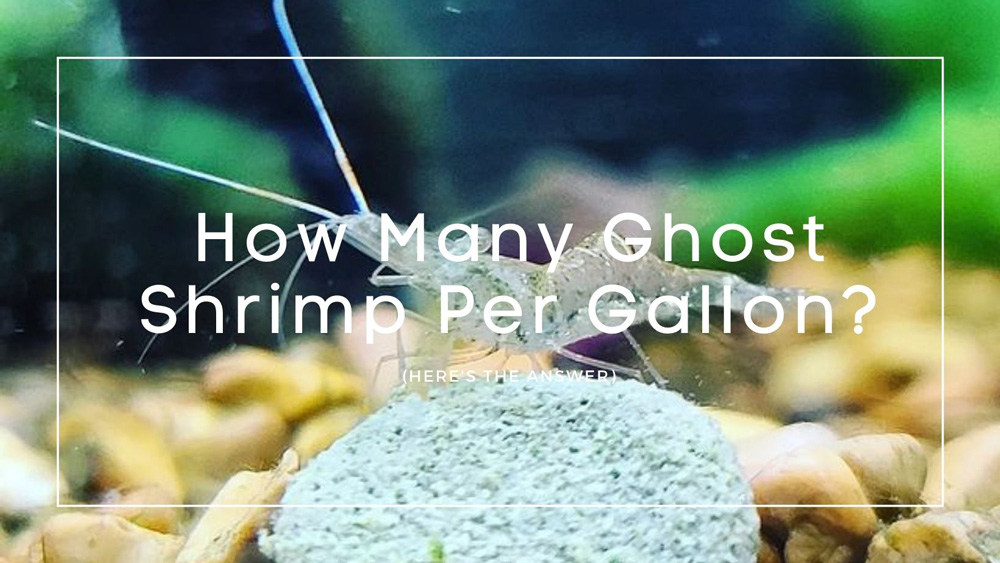 Do you want to have a thriving home aquarium with different species of aquatic life?

One of the most effective ways to do that is by keeping ghost shrimp. These tiny organisms are mostly docile and live on deteriorating plant bits, which helps clean the tank.

Needless to say, they look the part in most indoor settings, but tend to multiply fast, often leaving less space for other animals. Hence, we’ve formulated this well-researched guide to explain how many ghost shrimp per gallon you should have.

How Many Ghost Shrimp Per Gallon?

Ghost shrimp don’t require much room to reproduce quickly, making it difficult to know how many inhabitants you can have per gallon of water. Now, it’s challenging to determine an accurate number as it depends on several factors.

However, most aquarists don’t like to keep more than 3-5 shrimp per gallon. In some cases, the number may vary between 3 and 10, provided that you have all the elements needed for their survival.

So, what are the factors that determine the number of ghost shrimp you can keep per gallon? Let’s find out.

The first thing that you’ll need to decide is the type of aquarium for keeping the shrimp. We have seen that some people have a round vase aquarium while others prefer to use a regular fish tank.

Additionally, you’ll need to think about the aquarium size to house all the shrimp species effectively. That said, even large aquariums with a lot of features may not be ideal for keeping too many shrimp due to the lack of space.

Similarly, a smaller aquarium with more room may prove ideal. All things considered, 5-10-gallon tanks should be suitable for having an adequate number of shrimp.

Now, if you intend to keep only shrimp in the tank, you must consider a couple of things. For instance, do you want to fill the tank with ghost shrimp, or introduce other species?

If it’s the latter, we have found that cherry shrimp act as suitable tank mates for ghost shrimp. You can also introduce other varieties since ghost shrimp are tolerant and not particularly aggressive.

That said, we suggest that you don’t have more than 10 shrimp per gallon to prevent them from fighting for space. Not to mention, it will keep the tank inmates healthy.

Keeping ghost shrimp in a community fish tank is a different ball game and less convenient than having a shrimp-only tank. You will need to factor in the presence of other fish species in the tank and their reaction to the shrimp.

In general, shrimp are tiny creatures who don’t need a lot of room. But you can’t afford to pack them in and ruin the ecosystem of the tank.

If they fail to survive, the dead shrimp may spread diseases, or the fish could eat them up. To avoid this, it would be best to have 3-5 shrimp per gallon in community tanks.

You should know that although they are non-aggressive, ghost shrimp could turn violent if there are too many tank inhabitants. Naturally, you wouldn’t want to place them with other aggressive marine animals like crayfish, frogs, turtles, goldfish, and oscars.

That’s why it’s important for you to choose the right tank mate for ghost shrimp. You could introduce similar inmates like bamboo shrimp, Amano shrimp, or vampire shrimp.

We also found that different snail species live comfortably with ghost shrimp. But if you want to add fish, catfish like Cory and Otocinclus are ideal and don’t cause any harm.

Even though ghost shrimp can survive in various environments, it’s no secret that they are susceptible to poor water conditions. You’ll find that shrimps keep the tank clean, but you also need to help out and remove impurities.

They shed their exoskeleton after a few weeks, for which they need a lot of water. Hence, if the water is dirty, it may lead to health issues.

The easiest way to reduce tank waste is by installing a filtration system which also makes the shrimp low-maintenance. Additionally, slightly increasing the protein and calcium content may boost immunity to prevent infections and help them reproduce.

Even though they are docile, ghost shrimp are territorial, and you need to ensure that the tank resembles their natural environment. We recommend that you add black gravel and have a darker background, making it easier to spot them.

But it’s especially important that you add hiding places so they can take shelter when needed. Not to mention, such spaces help them relax when molting.

Most aquarists prefer to use decorations, plants, and driftwoods; however, you can use rocks and caves as well. Just remember that the hiding places should be more than the number of shrimp in the tank.

One of the best ways to make the shrimp feel at home is to add plants. But you should know that the number of plants determines how many shrimp you can have per gallon.

Ideally, you shouldn’t have more than 10 shrimp per gallon. That said, if the number of plants is less, it may be possible to increase the shrimp population to 25.

That’s all there is to know about ghost shrimp, their living conditions, behavior, and what factors you must consider to keep them healthy.

Contrary to popular opinion, you can keep only ghost shrimp in the tank – perfect for first-time aquarists. Not to mention, you won’t have to worry much about maintenance and underwater decorations.

But try to mimic their natural environment as closely as possible and clean the water to remove their old exoskeleton. On that note, we hope that our guide helps you manage your shrimp tank without any difficulty.

So have fun and take care!