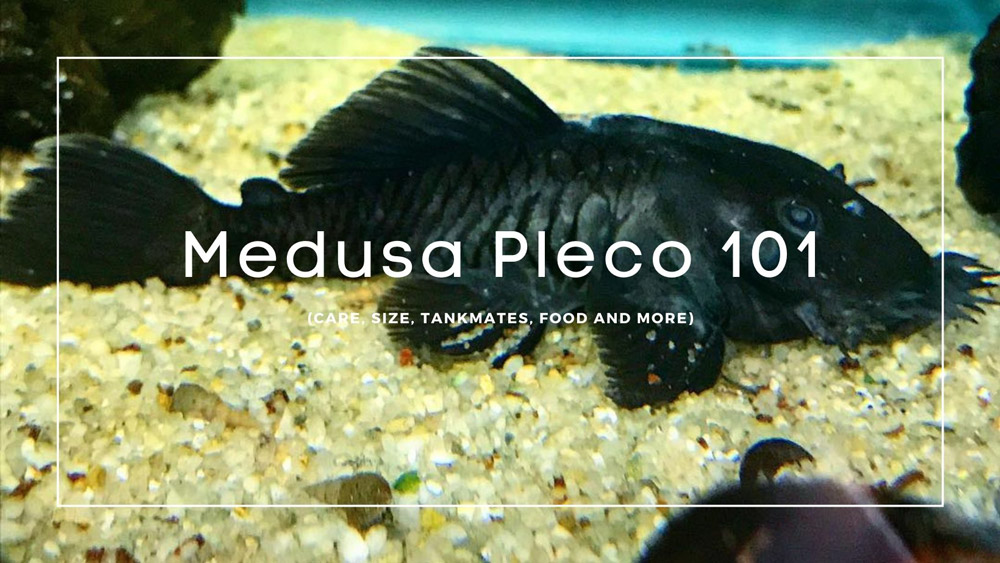 While most people look to pet goldfish or betta fish, a comparatively lesser-known option is Medusa Pleco.

These freshwater fish can live for a decade in home aquariums and are perfect tank mates that mind their own business. But they have specific needs that you need to be aware of; that’s why we have formulated this Medusa Pleco care guide.

Read on to learn more about this fascinating species.

The Medusa Pleco or l034 pleco goes by the scientific name of Ancistrus ranunculus, found across South America, primarily in the Tocantins and Xingu river basins. They usually prefer stony waterways like streams, hanging out near cracks and crevices to quickly dart for cover.

You can even find them at the bottom of the waterbed when they search for food. That’s why it would be best to house them in a large tank with lots of rocks or boulders, resembling their natural habitat.

As the previous section reveals, these aren’t big fish, with both males and females reaching a max size of 5.1 inches (14cm). However, their lengths may vary in home aquariums, depending on the water conditions and the size of the tank.

Medusa Pleco is a dark-colored species with several distinctive features separating them from other fish. If you look at the origin of its name, you will find that it comes from the Greek word agkistron, a reference to its interpercular odontodes covering the mouth.

Moreover, compared to the rest of the body, these fish have a wide head to search the river bed for food. Their circular mouth quickly scoops up both living matter and plant life without needing to stop.

When you bring plecos home, the fry will be of a lighter shade but turn dark blue as they mature.

Male Or Female Medusa Pleco, How To Sex

There isn’t much difference between male and female Medusa Pleco, so it might take a trained eye to distinguish the sexes. Both genders have tentacles, fleshy growths near the mouth, but these are less prominent in females.

In case you find that the male fish has several of these tentacles, it may mean that it has reached sexual maturity and is ready to breed. Other than that, it’s challenging to spot any tell-tale signs that could be a giveaway.

Unlike other fish species that only survive for a couple of years, Medusa Pleco lives longer in the right conditions. While there’s no guarantee of how long they may live in the wild, they can reach 5-8 years of age in home aquariums with proper care.

This is because there’s no risk of getting eaten by predators, not to mention, a regular food supply keeps them healthy inside large tanks. That said, there may be instances when they may fall ill or develop a disease, but overall these fish are not of the delicate kind.

The Medusa Pleco lives in the Brazilian river basin and are used to having a large area all to themselves. Depending on the number of fish you have in the aquarium and their mates, a tank size of 75 liters should suffice.

Aquarists can choose an even larger tank so that the males don’t get territorial and the females have sufficient room to lay their eggs.

As they are freshwater fish, you need to maintain the ideal water conditions to mimic their natural environment as closely as possible. We found that they thrive in a temperature range between 75 and 82 degrees Fahrenheit, combined with a pH level of 6 to 7.

Also, the water hardness must not be more than 179 ppm, but you have a wide berth to get the conditions right as the minimum value can be 36 ppm.

Medusa Pleco mainly forages along the river bed in search of food and easily consumes both plants and small animals. Since they are omnivorous, your job becomes easier, but it’s crucial to maintain a protein-rich diet.

For instance, bloodworms and shrimps are tasty treats that help develop their bodily functions. This is especially important when they are young and changing from their spotted appearance to a dark blue color.

When it comes to compatibility, like most plecos, ancistrus ranunculus is one of the most suitable species for a home aquarium. They are docile by nature and don’t grow very large, making them perfect partners for other non-aggressive fish.

However, they do get territorial, and males may show signs of aggression during the mating season. So, it’s vital to ensure that they have enough space and you won’t face any issues.

While choosing tank mates, make sure that the fish species has enough hiding places to avoid getting stressed out. Also, since they are bottom-dwellers, try not to keep similar types of fish together so that they don’t jostle for space.

Usually, cichlids or other peaceful community fish groups are most suitable for living with Medusa Pleco.

They are not easy to breed, and we recommend having a separate tank for the pregnant female fish. The female usually lays 8-12 eggs in a cave in the wild, with the male patrolling over them until they hatch about a week later.

After 10 days, the yolk sac disappears, and the fry emerges hungry for food, meaning you need to be ready.

Long story short, there are specific things you need to keep in mind when taking care of Medusa Pleco.

These fish don’t require a lot to stay healthy and live long; all you need to do is provide them with a nutritious diet. Not to mention, a large tank littered with rocks and crevices helps the fish adapt quickly to their artificial environment.