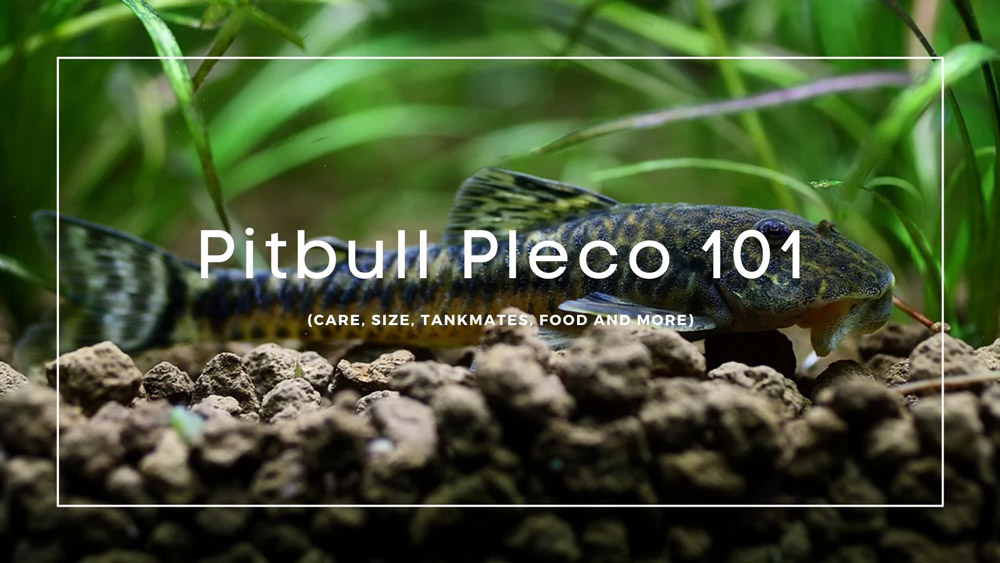 The Pitbull pleco (LDA25 pleco) is arguably the most attractive species of the genus.

This beautiful little aquarium fish is native to South America and known for having a good temperament. That said, the Pitbull pleco can be a charming addition to your fish tanks and aquariums, and taking care of them is pretty straightforward.

Nevertheless, there are a few things to remember if you are planning to keep them as pets. This Pitbull Pleco Care Guide will cover everything that you need to know about this species. So, read on to ensure that your tiny aquarium fish stay healthy and happy.

Scientifically known as Parotocinclus jumbo(also named Goby Pleco, LDA25 Plecothe in the aquarium hobby), the Pitbull pleco natives from the rivers and streams in Eastern Brazil.

They are most often seen in large groups and graze on algae in the wild. The pitbull pleco is an excellent alternative to otos, the best algae control fish, due to its smaller size and hardiness. However, they are omnivores who are not very picky about their food and should be kept in groups of at least three to thrive.

Moreover, the Pitbull pleco is a peaceful fish that can easily cohabit with other smaller fishes. These fish are nocturnal and prefer to hide behind plants, caves, or driftwood during the day.

A full-size Pitbull pleco grows up to about 2.4″ (6 cm); the maximum size is reported to be around 7 cm. It is a dwarf species of its genus and is known for its beautiful, distinctive features.

Pitbull pleco, a very characterful little fish, is ideal for small aquariums where larger plec species are not recommended. Furthermore, it can peacefully cohabit with most other fishes smaller or similar to its own size.

A Pitbull pleco has an average lifespan of 10 to 15 years when kept in pristine surroundings. On that note, it lives longer than most other tropical fish species.

Additionally, the life expectancy of the fish increases when it is given proper care. In fact, you can expect the fish to live for 15 years or more if you provide it with optimal conditions.

Pitbull plecos are often mistaken for the more well-known catfish genus Otocinclus when they are young. However, you can easily distinguish this pleco species by the presence of its distinct adipose fin.

Also, the color of this small tank fish can range between various shades of grey, which range from medium to dark grey. It can even look black, with hints of golden or greenish shades. The color mainly varies depending on the color of the aquarium substrate.

Male or female Pitbull pleco, How to Sex?

Additionally, sexual dichromatism greatly helps in distinguishing between male and female fishes. Males have beautiful bluish-green, shining saddles on their back that are lacking in females. The female members are also much plumper than males.

The minimum tank size for a group of six Pitbull plecos is 30 gallons. And its highest capacity can be up to 100 gallons. As the fish only grow up to 6 to 7 cm, a small tank is sufficient to keep them alive and healthy.

The water temperature in the tank should be kept between 68 and 73℉ for taking good care of the LDA25 Pitbull pleco species. As the fish is native to South America, it thrives well in moderate to high water temperatures.

Additionally, the ideal water pH levels for this fish are between 6.8 and 7.8. At the same time, you must maintain the hardness of the tank water between 142 and 445 ppm to avoid any diseases.

The LDA25 Pitbull pleco is primarily found in Peru and dwells best in a sandy substrate that offers a setup resembling a river bottom. The gravel substrate is also acceptable. However, make sure there are no sharp edges so they don’t hurt their ‘suckers’ while rolling around and eating whatever organic matter may be found there!

These plecos delight in eating algae. At the same time, they are able to clean the tank surfaces by feeding on algae, keeping the fish tank spick and span. Anyhow, pitbull plecos are omnivores, so you need to feed them lots of fresh veggies to ensure they have a healthy diet.

That said, you can feed them prepared veggies, such as zucchini or spinach. Along with these veggies, small amounts of living and frozen invertebrates, such as brine and bloodworm, are part of the regular diet of this catfish.

Pitbull plecos are peaceful and adjust well with other small fishes in a community aquarium. They are very active and prefer to exist in groups of three or more.

These fish spend most of their time lying on the substrate, never coming up to different surfaces except when it feeds at night.

Furthermore, they bury themselves in the substrate when they are alarmed. Like many Plecos, they are also highly adaptable and can easily survive in less oxygenated water.

There is a dearth of well-documented breeding reports regarding Pitbull plecos in captivity. However, it has been recorded that the rainy season usually has a positive impact on breeding.

This species of catfish lays eggs during the night on a sandy substrate containing plenty of plants and bogwood. It is worth noting that the eggs are sticky and usually laid on grass, hatching after about three days.

Pitbull plecos are extremely low-maintenance. That said, many pet owners prefer them as they are super-easy to keep alive and add a splash of color to your fish tank.

Moreover, this species of pleco is peaceful and can coexist with other smaller members of your aquarium. The Pitbull pleco can also help you keep your aquarium clean by feeding on any algae present inside the tank.

So, don’t be afraid to bring one home today. And if in doubt, just refer to this care guide on LDA25 Pitbull pleco species.

Take care, and we will see you next time!

Top 10 Lake Tanganyika Cichlids (With Pictures)
How Long Do Cichlids Live? (SA & CA)
Guppy Fin Rot 101: Everything You Need to Know (Causes & Treatment)
Cuttlebone for Snails (Is It Safe & How To Use It?)
Cory Catfish and Betta: Do They Get Along Well?