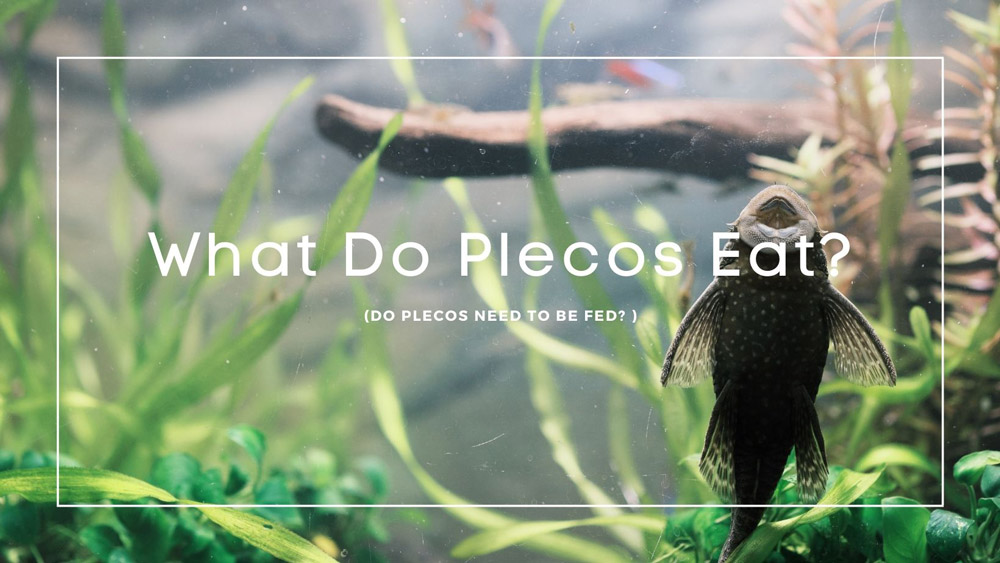 If you know about fish keeping, you’d know that plecos are popularly known as “tank cleaners.”

Be it dead organic matter, excess fish food, or thick algal growth like hair algae – they can clean it all. And this is one of the main reasons why first-time fishkeepers end up compromising their diet. That’s why we are here with our guide to help you figure out – what do plecos eat?

Let’s dive in now, shall we?

What Do Plecos Eat?

Since plecos are often classified as bottom-feeder catfish species or scavengers, many fishkeepers, especially first-timers, assume that they will thrive on the excess food and scraps in the aquarium. But they need a proper and balanced diet, mainly consisting of natural algae.

In case the tank doesn’t have adequate algal growth, you can always substitute it with store-bought sinking algae wafers. Once the pieces are placed in water, they will soak up the moisture and distribute the algal content for the fishes.

Additionally, you can add some blanched vegetables. Plecos also need meat protein, but too much of it can be detrimental to their health.

And depending on the particular type of pleco you’re breeding, you may need to add some driftwood to help the fish rasp on for better digestion. We will talk more about this in a later section of this guide.

How To Feed Plecos?

The first step in feeding your plecos is deciding on the type of food they require. For example, if there are baby plecos sharing the space with other fishes, then they will feed on the natural algae, algae wafers, and leftover fish food.

To give you an idea, the young “algae-eater” plecos require no more than one algae wafer per day.

However, if they are alone in a tank, then you may have to feed them more often, with more variety in their diet, especially as they grow and mature. Here, we should also mention that plecos are considered mature when they grow about 24 inches long.

A good way to understand the frequency of feeding is to observe how the fish is eating the food. Place an algae wafer in the water and see if the pleco is gobbling it down immediately or ignoring it.

In the case of the former, the fish may need to be fed more frequently. Otherwise, you can feed it at bigger intervals.

We’d suggest dropping one algae wafer in the aquarium at night (plecos are primarily nocturnal, they will rest in the daytime hours and eat at night). If it has been completely consumed by the morning, then you can replace it.

Since plecos depend on darkness to feed and move around, you can set a “light timer” to mimic the natural lighting patterns. This way, the aquarium won’t be exposed to light throughout the day, as the lights will automatically switch off at night.

Now that you have an idea about how to feed your plecos, let us walk you through the different types of food they need and how to prepare them.

As we have already mentioned, algae and algae wafers are the primary constituents of a pleco’s diet. And the best part is you don’t have to put practically any effort into preparing this meal. As long as there are enough algae (natural or in the wafer form) in the tank, you’re good.

You can either blanch the vegetables or feed them raw, but make sure that they are washed thoroughly and cut into small pieces. And remember that the fish will invariably take longer to eat the bigger pieces.

Although there’s much debate on whether or not all pleco species eat driftwood, it’s generally believed that the wood provides the ideal growing conditions for algae. On the other hand, a study found that the fiber, cellulose, and lignin content from the wood form an essential part of the pleco diet. And then there are some who think it’s not at all necessary.

But since there are no side effects to having driftwood in a pleco tank, you can safely keep it in the setup. That said, it’s absolutely necessary to include driftwood in the aquarium if you have one or more of the following species:

As hard as it may be to believe, plecos are actually omnivores, meaning they need meat protein from time to time to grow and develop properly. Hence, you can add small pieces of bloodworms, earthworms, and shrimps to their diet.

If you don’t have a fresh supply of these live food, then you can also buy frozen or freeze-dried bloodworms and shrimp pallets, which are easily available in almost any LFS. However, make sure that you’re not feeding them too much meat very frequently.

Likewise, sick plecos should be fed only leafy green vegetables and fruits, such as apples and pears. These are easier to digest and contain all the necessary nutrients that will help the fish recover faster.

How Often (Much) Should I Feed My Plecos?

We will now divulge the details of how much food (depending on the type) you should feed the plecos and how frequently.

Irrespective of the type or size of the plecos, you have to feed them at least once a day. And if they’re already scavenging on the leftovers of other fish, you can feed them once every two days. Furthermore, you can find ready-made pleco-specific food at pet stores, which will save you from the hassle of cutting and chopping food.

Why Isn’t My Pleco Eating?

One of the biggest reasons why your pleco has lost its appetite is the presence of too much light, especially during the night. Moreover, plecos like having “hiding spots” in their habitat, which make them feel safe.

Hence, too much open space, especially in high-traffic aquariums, can stress them out and cause appetite loss. Besides, they may take some time to recognize the food (especially vegetables) before eating it.

And much like most other fish varieties, the feeding habit and frequency of plecos take a hit when they are sick, so it’s essential to keep the water free from dirt and bacteria.

How Long Can A Pleco Go Without Eating?

Pleco species, like bristlenose plecos, can survive for a week or even more, provided they have some algae to feed on.

Yes, young plecos are true-blue algae eaters. But they need different types of food as they grow.

Do Plecos Eat Other Fish?

Plecos tend to eat dead and decaying fish that settle at the bottom of the tank, but never the live ones.

However, they are attracted to the slime-like substance that’s found on the skin of certain fish varieties, like goldfish. As a result, they may end up hurting the latter. But this problem can be prevented by feeding the plecos regularly.

Some pleco species, like bristlenose, like snacking on dead and alive snails. They are mainly attracted to the algal growth on the snail shells before eventually getting the taste of the “meat” inside.

Bristlenose plecos may occasionally snack on aquarium plants. However, bigger plecos don’t usually eat plants; they may swim through them, thereby causing some damage to the greens.

Although marimo balls are a type of algae, plecos don’t generally like feeding on them (due to the taste, the texture, or both). That said, they may not be left with any other option if they don’t get their timely feed, especially other types of algae, like hair algae.

Plecos like both fresh and frozen shrimps in their diet but not more than once or twice a week.

With that, we have come to the end of today’s guide.

While feeding is an important aspect of your plecos’ overall well-being, there are other important factors that shouldn’t be avoided. For example, the water should be changed regularly, as they tend to produce more waste.

Similarly, you should keep an eye for symptoms like torn fins, changes in their skin pigment, and clouded eyes. And don’t delay contacting a vet as soon as you observe them. We’d also recommend keeping only one pleco with other varieties of fish, except Oscars and piranha.

Hoping to see you next time. Till then, happy fish keeping!