Plecostomus or plecos are common fish found in many fish tanks. These bottom-dwellers are known for their peaceful nature and scavenging habits – they will eat any food that falls to the bottom of the tank.

While these fish are generally hardy and easy to care for, they can sometimes develop a white fungus on their body, head, and tail.

In this blog post, we’ll discuss what causes white fungus on plecos, how to treat it, and how to prevent it from happening again. We’ll also take a look at some tips for keeping your fish tank clean so that your plecos stay healthy and happy!

Table of Contents show
1 What is Fungal Infection on Pleco?
2 Fungal Vs. Bacterial infections on Plecos
3 What Causes White Fungus on Pleco?
3.1 Poor Water Conditions
3.2 Stress
3.3 Injured Fish
3.4 Nutrient Deficiencies
3.5 Infected Eggs
3.6 Fancy Guppies and Mollies
4 How Do You Treat White Fungus on Pleco?
4.1 Pimafix
4.2 Salt Baths
5 How Do I Prevent it?
6 Final Thoughts

What is Fungal Infection on Pleco?

As any experienced aquarist knows, fungal infections can affect most freshwater aquarium fish and can appear on several parts of their body. This is simply because the fungal spores are present in most aquariums.

The external fungal infection on pleco can be easily identified by its characteristic white cottony or “furry” appearance, which is often known as cotton wool disease. If your infected pleco is left untreated, you may notice the white stuff can become in other colors like reds and pinks.

Fungal Vs. Bacterial infections on Plecos

True fungal infections in pleco are caused by water molds (or water moulds). These filamentous fungus-like species come from common genera, including Achlya, Leptolegnia, and Saprolegnia. While the notorious bacterial infection – “mouth fungus” (or mouth rot), is often associated with several species of Flavobacterium.

Mouth fungus typically starts as white marks around the pleco’s mouth, fins, and body in the early stages, especially if your fish are newly arrived. Untreated plecos will manifest fluffy white cotton wool-like around the mouth. Eventually, the pleco’s lips will start to ulcerate and rot away. Fungal infections, on the other hand, are always present on the body or fins of the fish.

It’s also worth noting most fungal species only attack the external tissues of the pleco, particularly fish that are already sick or injured. While the five species of Ichthyophonus can cause internal infections.

These two types of infections require different treatments, so it’s important to correctly identify the root cause before beginning treatment.

Now that we’ve covered the difference between fungal and bacterial infections. Let’s look at the cause of white fungus on plecos.

What Causes White Fungus on Pleco?

As we mentioned earlier, the white fungus is caused by water molds. These species are saprotrophic and live on dead or decaying organic matter and animal material.

Therefore, they are often caused by poor water quality or a pleco’s weakened immune system. These two conditions provide the perfect environment for fungal spores to grow and infect the fish.

Here are some common factors that can predispose your plecos to fungal infections:

Poor water conditions are the number one cause of pleco white fungus. This is because water molds thrive in environments that are rich in organic matter and decaying material. Therefore, if your pleco tank is not regularly cleaned or the water quality is poor, it provides the perfect breeding ground for these fungi.

It often happens to people who are new to fish keeping and find that sticking to a regular maintenance schedule soon becomes a chore and overwhelming.

Stress is bad for plecos (and all animals) for several reasons. First, it weakens their immune system, making them more susceptible to diseases. Second, it can cause plecos to stop eating, which can lead to malnutrition and further weaken their immune system.

Like any aquarium fish, stress can be caused by several factors, including but not limited to:

Any physical damage to the pleco’s skin, fins, or mouth provides an entry point for fungal spores to enter and cause an infection.

Here are some many common injuries that plecos may suffer:

As a bottom dwellers, plecos are often neglected and do not receive a well-rounded diet. This can lead to malnutrition and a weakened immune system, which makes them not healthy enough to fight off diseases.

If your Plecostomus is infected with white fungus in a breeding tank, the eggs could be infected by fungi, especially these damaged and infertile eggs. They can then spread to other healthy eggs in the tank and infect them.

Since these bottom-dwelling fish are opportunists and may eat these eggs, this often occurs among community tanks with a pair of breeding fish.

While most Plecos are primarily herbivores, they don’t mind a little meat in their diet from time to time; of course, are only limited to tiny insect larvae. However, if you keep them with other carnivorous fish that consume fancy guppies and mollies, this can cause your pleco to contract the infection.

As you might know, the majority of fancy guppies are bred in large ponds in warm climates, which is easy to introduce parasites and constant inbreeding, making them quite weak.

When you bring them home from the LFS, the new environment and water parameters often stress them out and put them in a very weakened state, which makes them easily targeted by the fungal pathogens. When you feed them as fish food, the fungus spores can be easily passed on and infect your plecos.

How Do You Treat White Fungus on Pleco?

If your pleco has white fungus, the first thing you need to do is figure out what is causing it to avoid reoccurring.

As mentioned above, the most common causes are poor water quality and stress. Therefore, the first step is to test your water and make sure the parameters are in the correct range, including temperature, ammonia, nitrate, nitrite, and pH. A healthy environment should rarely have fungal infections.

Next, look for signs of aggression from other fish and remove any potential offenders. If you have plecos in a community tank, it’s best to move them to a quarantine tank for treatment. This will also help to prevent the spread of the infection.

Don’t forget to examine your filtration- the essential piece of equipment. Ensure it’s functioning properly and is not overloaded, or else your aquarium rapidly turns into an unhealthy sewer.

Once you’ve done that, you can then treat the fungus infection on pleco with Pimafix or Salt Baths. Most diseases spotted earlier can be successfully treated.

In most cases, you have to treat the entire tank, and then the API Pimafix is an excellent choice. Pimafix is safe with your biological filter and water chemistry as it will not discolor water.

To treat fungus infection caused by open wounds, you can utilize Pimafix and API Melafix together to quickly heal the wound.

After treating with Pimafix, be sure to do a 25% water change each day for five days to remove any residual medication. Repeat the treatment if necessary. 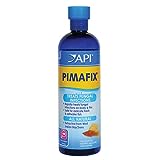 Moving the fish to a separate hospital tank is preferable if you find only your pleco has the infection. A salt bath increases the salinity levels of the water and essentially causes the fungi to dehydrate and die. It is a good way to fight mild cases of mouth and body bacterial and fungal infections.

To do this, you’ll need to make a saltwater solution using one tablespoon of aquarium salt per 3 gallons of water. You can add the salt directly into the hospital tank, but I recommend dissolving it in a container first to avoid shocking your pleco.

After the salt has dissolved, slowly add it to the hospital tank for over an hour. Once the desired salinity level is reached, you can add your pleco to the tank and then soak your pleco in this saltwater solution for 5 minutes.

Repeat this process once a day for 3-5 days or until the infection has cleared up. If there’s no improvement, try to increase the concentration.

How Do I Prevent it?

In my first-hand experience of all fish diseases, it is much easier to prevent than treat. The best way to avoid white fungus on pleco and other infections is by maintaining a clean and stress-free environment.

Anything from a sudden change in temperature or poor water quality can cause stress, and when fish are stressed, they are much more susceptible to disease.

Here are some tips to prevent pleco white fungus:

White fungus on pleco is a common infection that can be treated with API Pimafix or slat bath. The most important thing is to catch it early and keep a suitable environment to prevent it from happening in the first place.

By following these tips, you can keep your plecos and other fish healthy and fungus-free. If you have any good fungus treatment methods or tips, be sure to share them in the comments below!