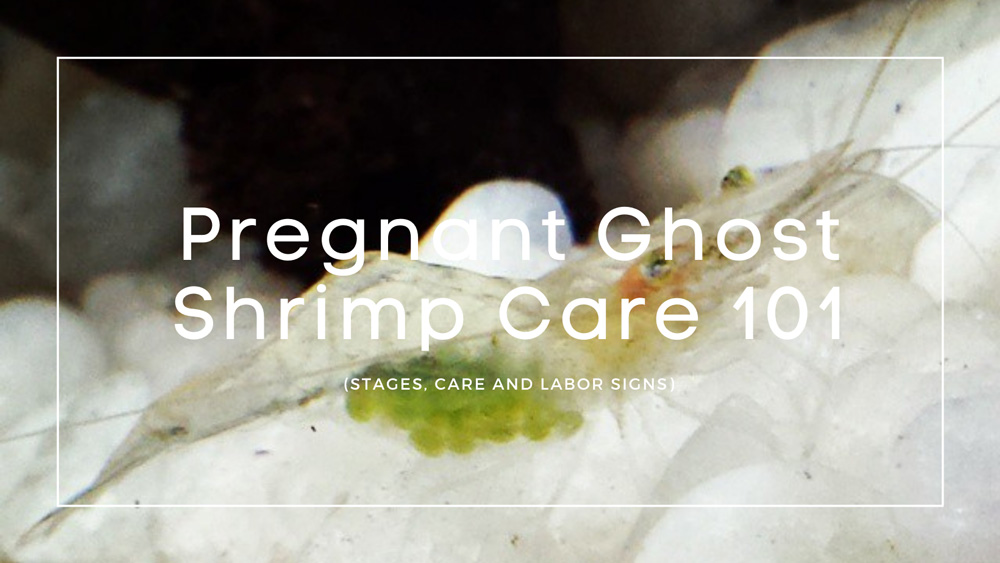 Well, let us ease your nerves by saying that ghost shrimps are one of the easiest species to breed, which is why they are popular among first-time breeders. Their transparent bodies literally enable you to keep an eye on them during the entire breeding process.

However, there are a few other things that need to be taken care of, and in this guide, we will help you figure out just those.

Before getting into the details, we should tell you that ghost shrimps are never actually pregnant, as they don’t give birth to live ones. Since they are basically egg-layers, the correct term to describe their birthing journey would be “gravid.”

Interestingly, both male and female ghost shrimps look alike, so you can’t really differentiate between them, especially if you haven’t seen one before. However, once they reach the breeding age, you will see small, round-shaped green eggs under the tail of the female species.

A female ghost shrimp usually carries anywhere between 8 and 85 eggs, some of which are fertilized by the male. Then, the female lays the fertilized eggs (instead of giving birth to young ones), which have an incubation period typically ranging from 12 to 14 days. Once that’s complete, tiny and delicate free-swimming shrimp fry will come out of the eggs.

How To Tell If Your Ghost Shrimp Is Pregnant?

In the following sections, we have listed the 5 major signs that will tell you whether your female ghost shrimp is about to lay eggs. These include both changes in physical appearance and behavior.

Green Dots Near The Saddle

If you notice small, green dots near the saddle (located close to the abdomen), then consider it as one of the first signs of the shrimp being gravid. These dots will initially appear tiny before becoming larger with time.

Sure, they won’t become too huge, as the shrimp itself has a small body, but keep an eye for green specks or small balls near the saddle.These dots are the eggs that will grow over time and get attached to the back legs of the female shrimp.

If you observe that the female shrimp is frequently fanning (or spreading out) her rear legs (where the eggs are attached), then she might be gravid.

Now, there isn’t a proper scientific explanation as to why they do this, but it might be a way to ensure adequate oxygenation for the eggs.

Alternatively, it may be a way to relieve the discomfort of carrying the weight of the eggs on their legs.

White Dots Near The Saddle

Once the male fertilizes the eggs (or the green dots), they may turn white and grow a little in size. So, white dots near the saddle are a definite sign of “pregnancy,” as they indicate that the fertilization process is complete.

As the eggs continue growing in size, they tend to move and attach to the rear leg of their mother, which takes us to our next point.

A Sudden Increase In Weight

Given the overall size of a female shrimp (a full-grown female usually measures around 2 inches long) and the inherent roundness near its abdomen, it may be difficult to see the weight gain. But when dozens of eggs start attaching themselves to the rear legs, you will observe a visible increase in its body mass.

Even if there’s a single female gravid shrimp in the tank, the males will surround her to assert their dominance. And by dominance, we mean that they will fight with each other to fertilize their eggs in order to pass on their genes to the babies and claim their lineage.

So, if you have observed male shrimps following the female everywhere in the water or “fighting” with each other, then there is a high chance that she is gravid.

Now that you have an idea about how to spot a pregnant or gravid shrimp, here’s a guide to help you understand the stages of the pregnancy.

Stage 1: Production And Development Of The Eggs

The first stage in the process starts with the female producing eggs, which usually happens every three weeks. These are the green dots that you see near the saddle, located close to the swimmerets.

The eggs will stay here without much change for at least the first 7 days, after which they start getting bigger and lighter in color (dark green to light green).

Between 8 and 14 days, the eggs will grow bigger and slowly move towards the bottom of the saddle and towards the rear legs. The male will fertilize the eggs during the start of the third week (on or after the 15-day mark), which will make them turn white.

Upon closer inspection of the fertilized eggs, you may even be able to see tiny black dots inside them, which will eventually develop into the eyes and stomachs of the baby shrimps. And the shrimp fry should emerge from the hatched eggs by day 21.

How To Take Care Of A Pregnant Ghost Shrimp?

When in the wild, ghost shrimps usually lay their eggs between the months of April and October. But for residential aquariums or tanks, keeping males and females together will initiate the process, irrespective of the time of the year.

One of the most effective ways to help your pregnant ghost shrimp give birth successfully is to separate it as soon as you spot the signs of pregnancy. And make sure you include the males as well to ensure fertilization of the eggs.

Since ghost shrimps are pretty small with less maintenance needs, you don’t really need an elaborate setup. You can keep 3 to 4 shrimps per gallon of water, and the minimum amount of water in the tank should be 5 gallons. We’d also suggest adding enough vegetation (mainly algae) and detritus, as ghost shrimps eat both plants and small insects.

Likewise, the ideal temperature range should be between 65 and 83 degrees Fahrenheit. And keep in mind that they may breed twice a year in warmer water.

Set Up A Breeding Net Inside The Community Tank

Breeding ghost shrimps in community tanks, albeit challenging, isn’t impossible. There are a few things that you need to take care of, the most important of which is shielding both the “mother” shrimp and its babies from other predator fish.

In this regard, you can use breeding nets to separate the female shrimps from the other fish and provide a safe space for them to lay their eggs. Depending on the type or model, the nets may come with suction clips for easy installation.

You can also add broken pots or a rich carpet plant cover that will house the eggs and pregnant shrimps.

Moreover, you must ensure that there is enough food in the tank so that the other fish varieties don’t fight with the shrimps while eating. Similarly, add enough plants and algae well in advance of the breeding session.

No matter whether you’re breeding the shrimps in a dedicated tank or community tank, separate the baby shrimps as soon as they hatch. Since adult shrimps are basically scavengers, they may feed on their offsprings, mistaking them for insects or pests. Hence, keeping the babies alone will keep them alive.

Talking about the diet requirements, pregnant ghost shrimps don’t require a specialized diet per se. That said, you may add some high-nutrient flakes, sinking wafers from time to time, and pieces of soft vegetables for snacking purposes. Furthermore, a steady supply of food is necessary to help the baby shrimps develop.

However, be careful not to feed them more than twice a day, as they will also source food from the plants and detritus.

Other than that, consider adding an air pump and sponge filter to the breeding tank. While the former will keep the water adequately oxygenated, the latter will ensure gentle water currents, which are preferred by both adult and young ghost shrimps.

As long as you keep the basics in mind, taking care and breeding ghost shrimp shouldn’t be a herculean task.

And as we have already stated, just make sure that the environment is suitable for the breeding process as well as keeping the babies healthy and alive. But before we leave, here are two more important tips.

First, keep in mind that a high-power filter can suck in the babies, thereby killing them. Secondly, wait for at least 5 weeks before adding the newborn shrimp into the community tank, as that would strengthen them enough for survival.

On that note, we will wrap up today’s guide. See you next time with more such informational content.

How Long Do Ghost Shrimp Live? (& Increase their Lifespan)
How Many Ghost Shrimp Per Gallon? (Here’s the Answer)

Hello, fellow aquarists! My name is Michele Taylor, and I am a homeschool mother of six children, which includes five boys and one girl. Growing up, our family had a large aquarium with angelfish, goldfish, and lots of different varieties of neons.