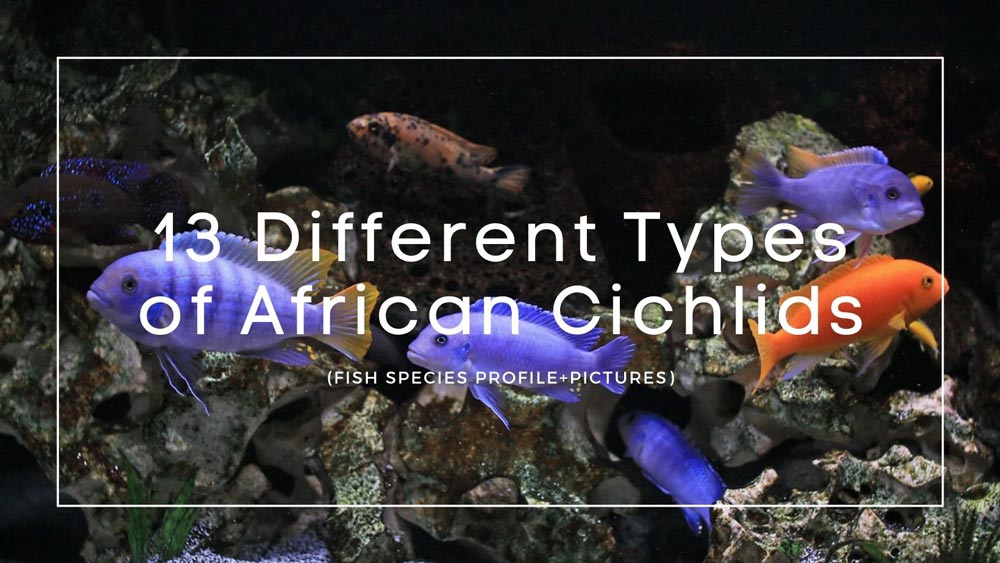 The continent of Africa has many wonders, not least of which is its amazing wildlife.

It’s of particular interest for aquarists as some well-known lakes and water bodies are home to the African Cichlid. This fish species love to swim around rocks and caves, diving into the sandy floor to search for meals.

But most importantly, they are extremely attractive and look good in home aquariums. However, you should know about their characteristic traits and requirements before owning them.

Today we’ll be discussing types of African Cichlids, their behaviors, and needs.

Males are territorial, so it would be best to research before introducing other species. Also, since they are natives of Lake Malawi, you need to provide an appropriate habitat, ensuring that they live in harmony.

So, a layer of sand in the fish tank is a must because they hunt for food at the bottom of the lake, foraging through the water bed.

The unique feature of the Red Zebra Cichlid is that they assume different colored coats in the wild; therefore, being known by various names. Also, certain traits, like their aggressive nature, remain unchanged.

These fish are extremely territorial and may turn on other fish if the aquarium fails to mimic their natural environment. You need to provide plenty of room along with structures like rocks, crevasses, and pyramids so that they can mark their territory.

Another interesting attribute is that the Red Zebra variants are matriarchal. Although not uncommon, it’s rare to find matriarchal families in the animal kingdom, making your aquarium a specialty.

Another fish found in the depths of Lake Malawi is the Bumblebee Cichlid. Unlike Peacock Cichlids, these fish are found in caves and have a bright yellow, black or tan color. Hence, they are also known as Hornet Cichlids or Chameleon Cichlids.

You should know that they are a little difficult to keep in home aquariums as the water must be highly alkaline. Of course, the use of laterite substrates can help maintain ideal water conditions.

Also, add rocks, crevasses, and other structures to match their cave habitat as they might find it challenging to adjust to unfamiliar environments.

Lake Tanganyika is home to spectacular wildlife, and it’s also the perfect place to find Frontosa Cichlids. This African fish has a large hump that grows in size once the fish reaches maturity, giving them a unique appearance.

Plus, aquarists love the tan and white color patterns with black markings, making them one of the most beautiful fish in the tank. If you provide them with enough room, rocks, and a sandy bottom, these fish will happily live with other species.

Understandably, they are unlike other Cichlids, being tolerant and generally docile.

Any aquarist with Electric Blue African Cichlid in the aquarium will vouch for its magnificent colors, grabbing everyone’s attention. Like most Cichlids, its sleek body enhances the visual appeal of its beautiful blue coat, and it looks great while swimming around the tank.

We must tell you that they are highly territorial and scour the perimeter of the aquarium, keeping intruders at bay. Hence, it might be a wise idea to keep them in a separate tank.

You must ensure that they have at least 70 gallons of water to swim, adding rocks and artificial trees to create a natural effect.

The Demasoni Cichlid is known for its striking coloration, having a combined black, blue, and white coat, to stand out in the aquarium. It’s a particular favorite of aquarists as it’s quite uncommon, found in a little-known place called Pombo Rocks.

Judging from the location, this fish thrives in rocky habitats, foraging among rocks and the sandy bottom for food. Hence, it would help if you recreated a similar habitat inside the tank, full of rocks and caves, for them to hide.

Additionally, the water needs to have a high pH level, for which aquarists need to use an aragonite substrate.

If you’re looking to breed an African Cichlid, try owning the Kribensis Cichlid. Originating from Western Africa, these fish are perfectly at home in aquariums, changing their colors as they mature.

Also, they are smaller than other Cichlids, earning them the name of Dwarf Cichlids, as they don’t grow bigger than four inches. So, you can keep them in a 50-gallon aquarium with plenty of rocks and caves to mimic their habitat.

But they retain their feisty temperament and might react aggressively to other fish.

The Venustus Cichlid doesn’t have a flashy body coat, but the blue and white coloration gives it a refined appearance. That said, the males are more attractive, sporting a blue face, yellow markings, and having a dorsal fin.

They require a lot of room to swim around and love foraging through caves and rocks. You must include these structures inside the aquarium, making them feel at home.

It’s also essential to prepare a sandy aragonite substrate to ensure that the tank has a high pH level. What’s more, don’t change the water concentration too much as they are highly sensitive to nitrates.

The one feature that sets this species apart from other African Cichlids is its gorgeous electric yellow cichlid. Further adding to the visual appeal is the fact that the mature fish have contrasting black stripes, making them a favorite for aquarists.

They brighten up the aquarium just like the waters of Lake Malawi. And you can expect to witness similar territorial behaviors, causing them to be aggressive towards other species.

Furthermore, it would be best to add rocks, caves, and sandy surfaces to the aquarium, ensuring that they are comfortable and relaxed in a new environment.

Another extremely eye-catching fish is the Duboisi Cichlid, found in the waters of Northern Lake Tanganyika. Interestingly, they change colors throughout their lives, starting with white spots on a black body. And as they mature, the black color gives way to a bluish face.

You can keep a maximum of six fish in one tank as they are highly aggressive even towards each other. A 50-gallon tank should be adequate, provided it has the right amount of pH, achieved by adding an aragonite substrate.

Also, try to include rocks and caves for them to explore the various aspects of their territory.

Kenyi Cichlids are small but feisty, known for their aggressive nature. So, it would help if you thought twice before introducing other fish as they might attack intruders.

They swim in the rocky habitat of Lake Malawi, which aquarists need to recreate in the fish tank. Meaning, there should be lots of rocks and holes for them to hide in. And since they are small, you can keep them in a 50-gallon tank without any hassle.

Moving on, they have a beautiful coat, with females sporting black bars on a blue body, while males turn yellow with age.

Lake Malawi is a hotspot for African Cichlids, and the Acei variant lives in its northwestern frontier. It’s easily recognizable, thanks to its slender body, blue coat, and yellow fins.

Now, it’s essential to keep them in a large aquarium as they need lots of room to swim around. Moreover, the tank should have caves and rocks, similar to their natural habitat.

You must note that Acei Cichlids hate bright lights, so it would be best to add dark gravel to the tank floor, helping reduce glare.

The Brichardi Cichlid is extremely popular as it’s one of the few albino species found in the wild. No wonder that it looks good in home aquariums and has an elongated tail with dorsal fins, standing out easily.

It’s important to provide just the right water conditions, maintaining adequate alkalinity and hardness, because they are highly sensitive to changes. That said, don’t add real plants to the tank as these fish are tenacious diggers.

Also, they tend to become territorial during the mating season but are otherwise peaceful occupants of the tank.

That’s all there is to know about African Cichlids; hopefully, now you can make an informed decision.

African Cichlids are unlike any other species (CA & SA) – perfect for the aquarist in you. It’s an exciting challenge and adds a touch of exoticism to your home fish tank.

Rest assured, these fish will brighten up the room, thanks to their eye-catching colors and beautiful slender body. Also, the inclusion of elements resembling their natural habitat makes the fish tank an ecosystem in itself.

You’ll enjoy watching the fish swim around, hiding among rocks, and changing colors as they mature!