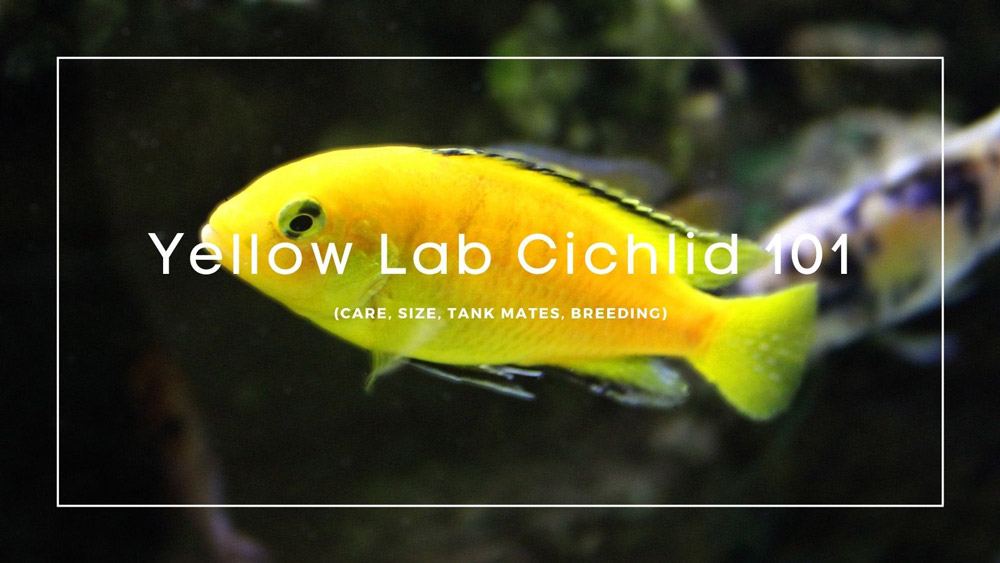 Scientifically known by the name Labidochromis caeruleus, yellow lab cichlid (also known as ) is among the most famous aquatic cichlid of Africa.

Owing to its beautiful and eye-catching colors, the species is much desired by modern-day aquarists. The brightness yellow labs have many names, include Yellow Labido, Electric Yellow Cichlid, Lemon drop Cichlid, Blue Streak Hap as well as Yellow Prince. People prefer keeping the commonly available yellow variety. However, blue and white variants are equally popular among hobbyists.

Keep reading to find out more about yellow lab cichlid!

The species is endemic to the western coast of Lake Malawi shoreline in Africa. It requires a substrate of gravel, sand mixture, and moderate lighting for living. Being semi-aggressive in nature, this fish likes living alone.

An average yellow cichlid has an elongated and stocky body that is slightly longer than three inches in its natural habitat. In an aquarium, it grows to a length of four inches as all the nutrients necessary for growth are available.

If looked after well, the little yellow fish can stay around for more than a decade. In normal circumstances, the average lifespan is at least six years, so you need not worry about flushing your pet down the toilet any time soon.

Other than that, the common coloration of the body is white, again embellished with the signature vivid black stripe. Some other varieties can be observed in yellow with white belly or blue dorsal fin.

Furthermore, it is perfect for budding aquarists because of its low maintenance and ease of breeding.

Male Vs. Female Yellow Lab Cichlid: How To Sex?

The primary difference between the two sexes of yellow lab cichlid is that the male is bigger than its female counterpart. Even though both are vibrantly colored, the dominant males have a more prominent coloration to the point that they appear almost golden yellow.

Female dorsal fins, on the other hand, are pale yellow with no faint spot for egg reception.

This species is considered to be one of the most peaceful and small types of Mbuna. It is majorly solitary and prefers living alone, or in pairs, so you should set up your tank accordingly.

An over-mixed environment where the females can dodge interaction with males is usually the best choice. Similarly, males should have the freedom to avoid other aggressive males.

To give your cichlids the best home, make a huge stony structure with abundant hiding holes and caves with a few stones placed to break the line of sight.

Moving on, it is extremely important to maintain top-notch water quality as it directly influences the lifespan of any fish species. Unlike others, this one loves changes in its water or external environment.

Install an external canister filter for the filtration of water, and keep the settings in a hefty mode. Fluidized and trickle sand filters are known to be the best for nitrification and some extra aeration.

Moreover, the species will deteriorate if tank conditions are poor for long; that’s why do change 10 to 20 percent of the water every week. You can go beyond this, depending on the severity of your bioload. A neutral pH level of 8 is usually the best but slightly alkaline is also tolerable.

Yellow lab cichlids can be kept in a 30-gallon aquarium, though 50 gallons is recommended for maximum comfort. It doesn’t really matter whether the water is fresh or brackish; just ensure that there’s a good water flow with efficient and strong filtration.

All African cichlids are quite prone to the affliction of Malawi bloat due to their herbivore dietary habits. But yellow lab cichlids are strong, immune, and less likely to be affected by this disease.

However, if water is old with poor oxygenation, they become susceptible to the ich disease. You can treat it by elevating the tank temperature to 84-86 degrees Fahrenheit for three days. If that doesn’t work, then you’ll have to treat your fish with copper-based medicines.

Although the species is primarily carnivorous in the wild, it can take a plant-based diet as well. Therefore, these creatures are omnivorous, needing special attention for herbivore portions of diet.

They eat raw proteins, such as bloodworms and brine shrimp, as well as high-quality food like pellets, flakes, frozen, and dried foods.

The species cannot be called a community-building fish, although it is relatively peaceful. It is adaptable and versatile, willing to live alone or in a pair.

This species forms matriarchal communities and is an oviparous mouthbrooder. The fish reproduces by laying eggs; hence is considered one of the easiest species to breed. You’ll be best off obtaining five to six young fry and raising them simultaneously.

Furthermore, before finding a partner, the males clear their territories on a substrate and defend them. Compatibility is extremely important for this fish since it predominantly prefers living alone.

This interesting little species is beautiful to look at and easy to maintain at the same time. If you are a budding aquarist and a lover of the color yellow, we recommend giving it a shot.

Majorly peaceful with a semi-aggressive nature, yellow cichlids may prove to be a delightful addition to your fish tank.

How Long Do Cichlids Live? (SA & CA)
Guppy Fin Rot 101: Everything You Need to Know (Causes & Treatment)
Cuttlebone for Snails (Is It Safe & How To Use It?)
Cory Catfish and Betta: Do They Get Along Well?
King Tiger Pleco (L333 & L066): The Differences and Complete Care Guide