The Multi Cichlid (Neolamprologus multifasciatus) has had quite the fan base among African Cichlids hobbyists over the past several years. It is uncommon in the trade due to its slow growth rate and small adult size.

This cichlid is a real beauty, with several different color variations. But don’t let its pretty face fool you. This fish can be quite feisty!

Since they are a bit rare, not many aquarists have an accurate understanding of their care requirements helping them thrive in your aquarium. And that’s why we’re here today, to help you better understand the Neolamprologus multifasciatus and give you the information you need to provide the best home for your new fishy friend.

So without further ado, let’s get started!

Neolamprologus multifasciatus often referred to as “multis” and Multi Cichlids in the aquarium community, are one of the small shell-dwelling cichlids that are endemic to the deep water around the shoreline of Lake Tanganyika in Africa.

In its natural habitat – the shell beds of Lake Tanganyika, where it forms vast colonies with thousands of individuals, or they also live in pairs in very small territories. The shell beds are mainly dominated by Neothauma tanganyicense, the largest gastropod and only found in Lake Tanganyika.

The term shell dwellers mean that these cichlids make their homes in and around abandoned snail shells. For the aquarist, you don’t need to require large tanks associated with other rock-dwellers like Mbunas, but you must provide an adequate number of shells.

Multis has a much stronger affinity to shells – unlike many other shell-dwelling cichlids, they don’t abandon the shells. Instead, they often burrow sand to move them into a new location. So if you see your Neolamprologus multifasciatus digging in the sand, don’t be alarmed; this is just their way of redecorating or sometimes a sign of the onset of breeding.

In the aquarium trade, multi cichlids are not as popular as other Lake Tanganyika species, such as N. leleupi, T. duboisi, and C. leptosoma. However, they are still widely available, owning to their prolific nature and small size.

It’s worth noting that its cousin: N. similis and N. brevis have a similar appearance and are often sold under the common name “shellies” or “shell dwellers.” If you want to breed them intentionally, ensure you get the right fish.

The Multi Cichlid has a somewhat elongated to very elongated body shape. The base color varies from pale white to dark brown, and they are adorned with black vertical bars running along their entire body. You may also see they have a large, upturned mouth, resembling a carnivorous predator.

Like some African Cichlids, this specie is highly variable and has eight known geographic variants, each with its own distinct coloration.

Neolamprologus multifasciatus is sexually monomorphic, meaning sexing them is difficult or impossible from their appearance until they reach maturity.

Adult males tend to be larger than females, and their coloration will be slightly more intense. Plus, males develop a reddish tint on the upper part of their dorsal fin.

The only way to tell the difference between N. multis and N. similis is that the stripes run across the entire body of the Similis, whereas on Multis, the stripes only start behind the gills. In the trade, Similis have a little high price tag than multis.

As for Brevis, they are slightly larger and more colorful than Multis. But they can be boring because of the lack of unique colonial behaviors. IMHO, if you have Brevis and Multis available in your LFS, go for the Multis. They are so much fun to watch.

In the aquarium, adult Multi Cichlids reach 2 inches (5 cm) in length, while the female only grows to be about 1 inch (2.5 cm).

Commonly, fish can be larger in the wild than in aquariums, but this species is an exception. In the wild, the male Multis can only grow up to 1.2 inches (3cm) long, and females are around 0.87 inches (2.2 cm), making them one of the smallest species of cichlid in the world.

The average Neolamprologus multifasciatus lifespan is between 8 and 10 years. Their lifespan can vary a bit depending on the level of care they receive and the quality of their environment.

There’s no need to complicate this through. Just do your best to provide your fish with a clean and stable tank, and stick to the guidelines in this guide! They will reward you with many years of enjoyment.

For the most part, Neolamprologus multifasciatus care is relatively easy compared with other African species; It’s something that beginning or experienced cichlid keepers should have no trouble with.

Of course, multis have their preferences. To ensure they stay happy and healthy in your care, here are some things you need to follow.

Due to their small size, you don’t need a very large tank to keep multis happy. A 15-gallon (24″ x 12″ x 12″) aquarium is more than sufficient for a pair. Some owners have even seen success with a pair in a 5-gallon tank. (I’m not a big fan of small tanks).

If you want to house large colonies to show their unique colonial behavior and personality, a larger tank of at least 20 gallons is definitely needed.

Water conditions are very similar to other African cichlids, but you want to take this very seriously when it comes to Multi Cichlid care.

It’s best to recreate the water conditions of their natural habitat in your aquarium. In Lake Tanganyika, the water is alkaline. Since it’s the second largest lake in the world, the chemistry and temperature are very stable, especially in the deep water where Multis live.

Like any Tanganyika cichlids, multis are very sensitive to large water changes unless the new water has similar chemistry to the old water. I recommend doing smaller (10-15%) water changes weekly.

Stick close to the following parameters, and you should be good to go!

In addition, Lake Tanganyika and Lake Malawi have high oxygen levels, so you need to provide good aeration and filtration. Running the air stone 24/7 can help with this, even if there are plants.

This is the part where you can get creative. But to mimic the Lake Tanganyika biotope, the sparse decor is the way to go.

Two special things to note about the tank setup:

If you really want your multis breed like a rabbit and feel comfortable, I highly recommend investing in escargot shells. They make the perfect little homes for your fish and look amazing when paired with Seiryu stone and sandy substrate; You won’t regret it! 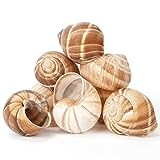 Besides that, you can use rocks, driftwood, and plants to create a pleasing aquascape as long as there’s plenty of open space. I prefer to leave the shells in the center and front of the tank and place rockwork along the back and corners.

In the wild, Neolamprologus multifasciatus is an omnivore and micro predator that mostly feeds on plankton that slowly passes by them in the water column.

Feeding them is pretty easy in the home aquarium. However, you’ll want to ensure you provide them with a high-protein diet. This means a mix of frozen and live meaty foods, as well as a high-quality cichlid pellet or flakes.

This small and playful fish does BEST in a small species-only tank. However, you can mix them with other Tanganyikan fishes in a larger aquarium.

In a species-only tank, they can be territorial and defend their shell and the small territory, which often happens during the breeding season. If you house them with other Neolamprologus cichlids, make sure each fish has its own shell to reduce aggression and try to purchase more females than males.

In a mixed Lake Tanganyikan aquarium, they can be kept with other small rock dwellers. Here are a few Neolamprologus multifasciatus tank mates to consider:

Breeding Neolamprologus multifasciatus is easy. This species has been bred in home aquariums for many years.

Since the Multi Cichlid is often found in a harem in the wild, this fish is a harem spawner. This means one male will spawn with several females in his territory.

Though you can breed them in a community tank, breeding them in a separate tank makes things much easier and will result in more fry if you try to breed for profit.

Set up a breeding tank with the same water parameters and decor as we suggested above. For best success, I recommend having at least 4-6 females per male in the tank or starting with 6- 8 juveniles.

The female Neolamprologus multifasciatus will lay her eggs in the shell, where the eggs are fertilized by the male. After that, the female carefully guards the eggs inside the shell entrance while the male defends the whole shell pit and the surrounding area.

Fry start to venture out of the shell after 7-10 days, but if they feel threatened, quickly dash back in. After two weeks, they are old enough and eventually leave the safety of their shell for good.

Interestingly, fry are tolerated by their parents in the same territory. But newly added shells as starter homes are appreciated.

Neolamprologus multifasciatus is a small and beautiful Tanganyikan fish that’s perfect for African cichlid beginners. They are relatively easy to care for, and their small size makes them a good choice for smaller aquariums.

If you’re looking for a playful and active cichlid that will add some personality to your tank, we highly encourage you to give multi cichlids a try. The satisfaction you get from watching these charming little fish play and interact in your aquarium will be well worth the effort.

Do you have experience with Neolamprologus multifasciatus? We’d love to hear about your journey in the comments below.

Until next time happy fishkeeping!