As anyone who has ever been to aquarists can attest, fish come in a remarkable variety of colors and patterns. However, few fish are as dazzling as the African cichlid.

These vibrant fish are mainly native to the African Great Lakes, where they come in a wide range of hues, from electric blue to stunning red.

If you’re interested in looking for the most popular red African cichlids, then you’ve come to the right place. No matter what your setup is, there is at least one of these fish that will be a perfect fit.

The Eureka Red Peacock, also known as Eureka Peacock or Eureka Red, is certainly a unique fish for appearance.

However, this is a man-made Strain of Aulonocara jacobfreibergi “Otter Point.” It was originally created by a local fish farmer in Florida. However, it quickly became popular among fishkeepers around the world for its beauty.

This cichlid is moderately easy to care for. Although it’s not endemic to Lake Malawi, it still requires similar water parameters. Unfortunately, these fish are only available online from time to time at a moderately high price.

Another line-bred Peacock, the Ruby red peacock, is the result of selective breeding of the golden Aulonocara sp. stuartgranti “Maleri” (Yellow Peacock Cichlid). As a result, these fish have an overall more uniform red coloration than the Eureka Red Peacock, but blue scales are scattered across the body.

Just like the Sunshine Peacock, it has shimmering metallic blue coloration on most of its face. Sometimes, you can find faint vertical bars covering their entire bodies but absent on the dominant male fish.

If you want to boost the red coloration of your fish, you should consider a color-enhancing diet or other protein-rich food to help bring out their colors, such as brine shrimp and worms.

Ruby Red Peacock care is something that beginners or experts can easily manage. They are relatively peaceful cichlids and make an excellent addition to Peacock Aquariums.

Like many other African Cichlids, the male Red Zebra(Metriaclima estherae) comes with several color morphs, including the popular “red-red” strain. The main body of these fish is orange or red without vertical bars. The males develop a light blue shade over their bodies and fins when they mature.

While the Cherry Red Zebra is a line-bred variant of the “red-red” strain, it has a cherry red coloration, as its name would suggest. A high-quality diet can help to bring out more red coloration as well.

The Cherry red zebra cichlid is absolutely stunning. But it’s not a beginner-friendly Mbuna because of its aggressive nature – only recommended for intermediate and experienced cichlid keepers.

African Cichlids will quickly deteriorate the water quality, and most are susceptible to “bloat.” 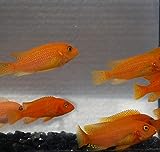 The Red Empress Cichlid (Protomelas taeniolatus “Namalenje”) is an eye-catching type of Hap that’s highly sought-after among Cichlid hobbyists for years. Not only are they beautiful, but they are relatively peaceful.

Red Empress Cichlid’s care is relatively easy. They are not as aggressive as most of the Haps and can coexist with other peaceful tank mates. However, they might become territorial when spawning, so it’s best to provide them with plenty of hiding places.

The Red Jewel cichlid or African jewelfish, scientifically known as Hemichromis bimaculatus, hails from West Africa. It gets its name from the fine “jewel-like” bluish spots that are present on the red body.

It has a streamlined body with three dark spots on the sides, located on the opercle, middle body, and tail, respectively. The dorsal fish starts about a third of the way down the body and extends to the base of the tail.

Red Jewel cichlids are relatively peaceful fish but can be quite territorial and aggressive when spawning. They are also known to be nippy, so it’s not a good idea to keep them with long-finned fish.

Tropheus Moorii, also known as the Blunthead cichlid, is a species of fish native to Lake Tanganyika. T. Moorii is notable for its wide range of coloration and patterns. In fact, T. Moorii has over 50 different color morphs (over 120 known varieties), even though there are only six described species.

Like other varieties, Black red Moorii has a stocky body with a larger head and underslung mouth.

These fish are known to be quite aggressive with conspecifics but are otherwise peaceful with other fish. The dominant male will fight with other subdominant males, and you will lose them in most cases.

T. Moorii is mostly herbivores and needs to be kept in a large group of at least 15-25 fish. This species is also susceptible to African bloat, making it one of the “expert-only” cichlids.

Move on. This is another Tropheus from lake Tanganyika. Like the Black red Moorii, Firecracker Tropheus has a similar appearance.

The body coloration of Firecracker Tropheus is red with some maroon or brown spots. The red coloration is more prominent on the lower portion of its body and dorsal fins. You may notice a vibrant red line that runs from the base of the tail fin and extends to the middle of its body.

As for the head, it’s often covered in maroon. But some specimens spot a bright red coloration near the lower jaw, which stands out against the black base, creating an undeniably unique look.

Firecracker Tropheus is also highly aggressive with conspecific – especially when spawning. Plus, the tendency to develop “bloat” makes it a real challenge to care for.

Do you have a favorite red African cichlid? Let us know in the comments below!