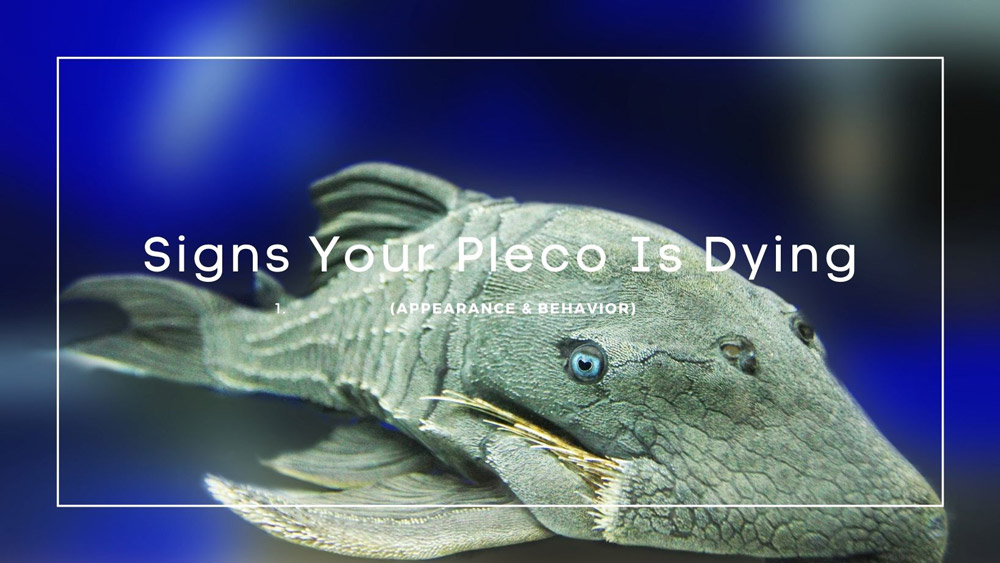 Coming in shades of brown and black, topped with beautiful patterns, Plecos are among the most beginner-friendly and hardy aquarium fishes.

That said, these aren’t totally immune to diseases, sudden sickness due to improper habitat, and old age. Hence, if you find the pleco relatively inactive than before or show any inconsistent behavior, it might indicate that the fish is dying or sick.

That’s why we’ve tried to help you out by preparing this guide to the signs your pleco is dying. Read on to know more.

How To Tell If Your Pleco Is Dying

A change in color, shape, size, or other external signs of the observed pleco can indicate fish stress or susceptibility to various diseases. Signs may also include any abnormal behavior.

You might find the following changes in the appearance of a pleco fish if it’s sick or dying.

If you find that the pleco fish is losing its original color and gradually turning white, you can count this as an indication that it’s sick. Naturally, your pleco will need immediate care.

These fish can turn white for various reasons that include stress, improper tank conditions, and more.

True to its name, the pop-eye symptom is marked by protruding eyes. So, you’ll need to observe the eyes of your pleco carefully to ascertain whether it’s indeed having such a symptom. Some possible reasons behind this are impurities in the tank water, deficiency of vitamins and tetracycline, etc.

Firstly, you should know that this is the primary symptom of a parasitic disease in pleco fishes known as ich. The spots appear like coarse salt grains on its fins and sometimes even on the body. Note that this disease thrives mainly due to the poor quality of water.

If your pleco has a sunken belly, that’s a major indication that it’s not well. Again, this condition can arise due to a number of issues such as bacterial or parasitic infection or prolonged starvation.

Silver Or Gray or White Sheen on Skin

When a pleco is sick, both its body and fins can acquire a sort of sheen that might have a cloudy, white or silvery color. This is caused when bacteria such as mycobacterium inhabit the body.

The following is a list of some abnormal pleco behavior that may be observed to indicate a possible problem.

You may notice your pleco fish swimming near the surface water in the tank, whereas normally, pleco fishes stay at a certain depth in water tanks. This happens when the level of dissolved oxygen in the water is lower than usual, which might even lead the fish to absorb air from the surface.

Lying On Bottom And Piping

In case the pleco is lying on the bottom of the tank and gasping, it’s a strong indication that the fish is nearing death.

If you observe uneaten food in the water tank, it’s a sign that your pleco fish isn’t eating as much as it used to. And this, in turn, implies that all’s not well with the fish.

Sometimes sick pleco fishes might exhibit odd swimming patterns such as a continuous spiral pattern. This can occur due to issues such as ammonia poisoning, poor water quality, or stress in the body system of the fish.

Why Did My Pleco Die?

A pleco might die if the water conditions are inadequate, i.e., if specific parameters such as proper pH, hardness, tank size, and temperature aren’t maintained.

Plecos might be affected by several types of diseases such as dropsy, ich, head hole, and fin rot. Hence, if such a disease isn’t treated at the right time, the fish will eventually die.

Fungal growths on the body are common in plecos and are caused by water molds known as oomycetes. Such a disease, often called fish fungus, can cause the fish to die if not treated timely.

In case the pleco is overly stressed and left unattended, it is likely to die within a short while. Symptoms of stress include color fading, reduced appetite, weight loss, and odd swimming patterns.

How To Save a Dying Pleco?

Firstly, you can use a water test kit to make sure the habitat has optimal levels of ammonia, nitrate, and pH.

Clean The Tank and Change the Water.

The next step would be to clean the tank by scrubbing it softly with salt and vinegar. Following this, you should see that the water is changed and cycled as per the required standards by taking help from a local aquarium shop.

After the water change, you must try to reduce overcrowding due to other fish or decor by shifting sick/dying plecos to another tank. That’s because the pleco might find it difficult to breathe or eat properly due to overcrowding.

Identify Symptoms of a Dying Plecos

Now, you must shift your focus to the symptoms of the dying pleco. Make sure you check all the symptoms we’ve talked about earlier in the article.

Treat The Water with Heat

Finally, you must heat up the water in the tank so that the life cycle of any parasite infesting their body speeds up. This will enable you to kill them quickly using medication.

Use A Commercial Medication

If you observe symptoms of any fungal or bacterial infection in the fish, you can use commercial medication to cure the condition. For instance, using Jungle Ick Clear Tabs in the tank water can help clear white spots caused due to stress or temperature changes.

Do Plecos Float When They Die?

No, pleco fishes will generally lie motionless on the bottom of the tank if they’re dead.

How Long Does It Take For Pleco to Die Due To Ich?

To spread throughout the body of the fish, this disease can take at least a few days or slightly longer than a week.

As evident from above, conditions such as poor tank water quality, overcrowded surroundings, and improper nutrition are detrimental to the health of a pleco. Hence, ensure that you take proper steps to keep your fish tank in good shape as that’s sure to keep the fishes hale and hearty.

How Long Do Cichlids Live? (SA & CA)
Guppy Fin Rot 101: Everything You Need to Know (Causes & Treatment)
Cuttlebone for Snails (Is It Safe & How To Use It?)
Cory Catfish and Betta: Do They Get Along Well?
King Tiger Pleco (L333 & L066): The Differences and Complete Care Guide