Apple Snail Vs. Mystery Snail (What Is The Difference?) 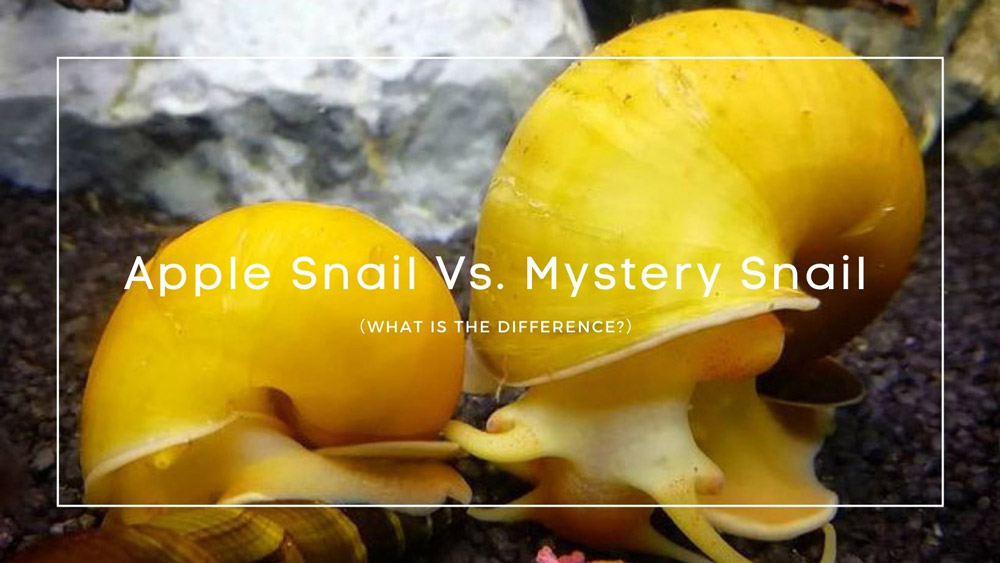 Not many people can properly differentiate between different classes of snails.

Snails, like other types of aquatic animals, have many different species. The number can be as high as one hundred and fifty thousand! But out of all, today we’re going to talk in-depth about two of them.

Table of Contents show
1 Is Apple Snail And Mystery Snail The Same?
2 The Same Characteristics And Behavior
3 Apple Snail Vs. Mystery Snail, What Is The Difference?
3.1 Species Names
3.2 Size
3.3 Colors
4 Do They Consume Live Plants?
5 Final Thoughts

Is Apple Snail And Mystery Snail The Same?

The answer to this question isn’t that straightforward, because yes, apple and mystery snails are similar in many aspects, but no, they aren’t entirely the same species.

In fact, “apple snail” is a much broader term that includes several other species of which mystery snails are a part. It is the common name given to the family of a large variety of aquatic gastropods and freshwater snails, Ampullariidae.

Whereas the mystery snails, known as Pomacea diffusa in the scientific world, are just a species belonging to the family of apple snails, among various other species. So, you can say that all mystery snails are apple snails, but the reverse is not true.

The Same Characteristics And Behavior

Since mystery snails essentially belong to the family of apple snails, they have quite a few characteristic features that make them eligible to be categorized in the family itself. As a rule of thumb, all the creatures in Ampullariidae have operculum and gills.

Secondly, all apple snails, including mysteries, have a siphon they use for breathing. This feature makes them amphibious, as they can extend it above water to breathe in the atmospheric air.

Furthermore, all of them are gonochoristic, which means both male and female individuals are needed in order for breeding. That seems pretty basic since you are so used to seeing advanced species of the animal kingdom.

But a lot of the creatures (primitive ones, including a few mollusks) breed through vegetative means or parthenogenesis (that don’t require male and female counterparts). So, it is important to keep a note of species that do not.

Apple Snail Vs. Mystery Snail, What Is The Difference?

Having discussed the similarities between the creatures, we can now move on to study their differences. Let’s discuss their distinctive features one by one.

Mystery snails are one particular species belonging to the genera Pomacea and go by the specific epithet diffusa. So, they are known as Pomacea diffusa.

On the other hand, apple snails do not have a specific name as they aren’t one distinct species; instead, they are a whole family. This family is known as Ampullariidae and belongs to the class Gastropoda of the phylum Mollusca.

Does that seem like a lot of science? Well, we’re just trying to give you authentic information. Hope you’re enjoying that.

Another factor that distinguishes any other species of apple snails from mystery snails is their size. The former grows out to be considerably large, as big as a golf ball, but the latter does not.

In fact, mystery snails are also one of the largest snails to exist, but they aren’t as big as some of the apple snail species like the adult Canna. Most of them stay around one to one and a quarter inches in diameter.

A few Apple snail species like Pomacea canalicuta grow up to be huge in size and eat without bounds. They adapt to their habitat so well that they learn to survive for long on their own without much external care.

Now, the laws in the US for snail breeding and trading are pretty strict and have proclaimed certain species as illegal because of their large size and destructive nature.

For this very reason, there have been instances of them becoming invasive in certain states and acting as pests to crops, such as rice. They cause a lot of agricultural and ecological damage and pose a hazard to human health too. Diseases like intestinal fluke and rat ringworm are known to be spread by these little troublemakers.

Mystery snails, on the other hand, are comparatively safe and do not carry any threat of diseases or damage. Hence, you can keep them in your aquarium without any risk; just remember that they excrete a lot.

The primary difference lies in their feet color, as mystery snails typically have either pure white or a dark slate foot. At the same time, apple snails have olive green feet, which might be a hybrid of light and dark shades.

Do They Consume Live Plants?

The eating habits of the creatures in question also vary to a certain degree. While mystery snails are voracious eaters of plants and munch like there’s no tomorrow, not all apple species are so hungry for plants.

A majority of the latter are omnivores or carnivores, unlike mystery snails. Some apple snail species like Colombian ramshorn and Carnivore canaliculatas are hardcore carnivores, but mysteries mostly feed on plants peacefully.

And with that, we’ve reached the end of our brief guide on mystery and apple snails. If you’re planning to introduce a few new members in your aquarium, snails are a good choice, but you need to be mindful of the species you’re choosing.

Friendly mystery snails like Pomacea bridgesii and Pomacea diffusa will be an excellent addition. But we strictly advise against keeping invasive and large apple snails like maculata and canalicuta.

Snails are good algae eaters and will keep your tank clean, so we suggest going ahead and giving them a try!

Cuttlebone for Snails (Is It Safe & How To Use It?)
Mystery Snail Poop: Are They Eggs or Just Poop?
Dead Mystery Snail: Is it Dead or Just Sleeping?
Calcium for Mystery Snails (Find the Best Sources)
Why Is My Mystery Snail Floating? (The 8 Main Reasons)