The first thing you need to understand about betta fish flaring is that it does not inherently mean something is wrong with your betta. Flaring can essentially be described as a defense mechanism. It is their means of establishing dominance, acknowledging threats, and other scenarios along similar lines.

Table of Contents hide
1) What Exactly Is Flaring in Betta Fish?
2) Why Is My Betta Fish Flaring?
2.1) Why do betta fish flare up most often?
3) Is Betta Fish Flare Always A Sign Of Aggression
4) Why Does My Betta Flare at Me?
5) How Do Bettas See The World?
6) Do Bettas Really Flare At Their Reflections?
6.1) How to Stop A Betta Flaring Too Much?
7) Is Flaring Really Bad For Betta Fishes?
7.1) Conclusion

What Exactly Is Flaring in Betta Fish?

The actual act of “flaring” refers to when your betta puffs out its gills. This is done to give them a larger appearance. Knowing this makes it easier to see why it is used defense. In the wild, it can be quite successful at keeping predators away.

The betta fish flaring behavior can make it more difficult for predators to get them. This makes the behavior inherently valuable. It is not something you will simply be able to stop them from doing in the aquarium you have set up for them.

At the same time, it is still a good idea to understand what flaring can mean from one situation to the next. This extends to knowing the triggers which can cause a betta fish to flare in the first place.

Why Is My Betta Fish Flaring?

Let’s start by covering the range of possibilities for a betta flaring fins up. We already understand that this is a response to something they perceive to be a threat. What you want to be able to do at this point is know exactly what is causing the behavior. A little flaring is fine. It can even be beneficial, which we will discuss in detail later. However, too much flaring can be harmful.

Why do betta fish flare up most often?

That would be the presence of another male betta in the tank. Of all the things that seem to bother bettas, there are territorial male bettas or other tank mates in the tank tops the list. This will almost always cause both male bettas to start flaring up.

Bettas are known as “Siamese fighting fish”, they can escalate to fighting, which can damage, or even kill, one or both of the bettas. It is for this reason alone that two males should not be put in the same tank together, barring special circumstances or efforts to keep them as distanced as possible.

Remember that male bettas are extremely territorial. Keeping this in mind will help to inform how you interact with and care for your betta fish. Obviously, you want to avoid behaviors that can cause them to flare out. There are a couple to that end worth noting.

If you’re interested in knowing about 50+ tank mates that can live with your betta fish then check out this HUGE list of betta tank mates! 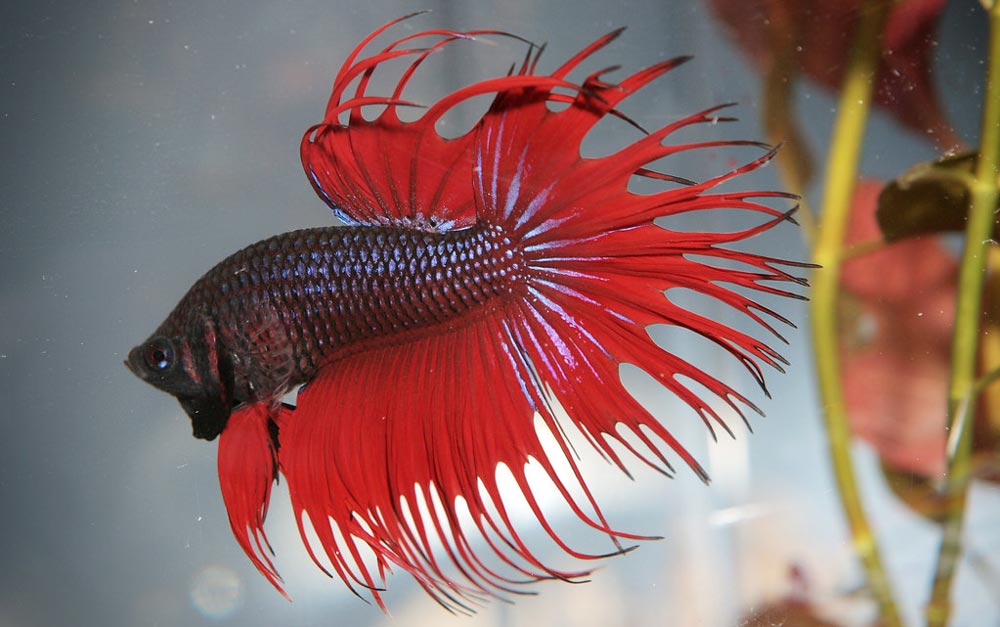 Is Betta Fish Flare Always A Sign Of Aggression

Before we cover some of the other triggers associated with flaring, let’s make one thing perfectly clear.

The act of your betta flaring up in of itself is fine. If you notice the betta doing this for a few seconds each day, it is almost a certainty that they are fine. A little flaring is good, if you think of it in the same sense as you would if you got up to stretch, after sitting down for a long time. Flaring for a few moments each day is essentially your betta getting in some exercise. It helps them stay in shape.

Having said that, there is still a point in which your betta fish is flaring too much. This can have serious repercussions, if you don’t address the specific reason for this behavior.

If your betta isn’t stressing out over the presence of another male, there are at least a couple of other possibilities you’re going to want to be on the lookout for.

Why Does My Betta Flare at Me?

While it is not altogether common for bettas to flare up at their owners, this is something that can happen occasionally. There are always going to be stories from those who found their betta flaring up when they fed them, or even flaring when they tried to initiate a game with them (such as moving a finger along the tank for them to chase). Does this mean your betta doesn’t like you?

Your betta flaring at you is merely a response to perceived aggression. It doesn’t mean they don’t like you. In particular, bettas who are new to your home are likely to do some flareups in the beginning. New surroundings are always going to make your betta a little bit nervous. You want to do everything possible to ensure their transition to new surroundings goes as smoothly as possible.

How Do Bettas See The World?

In all likelihood, your betta just needs time to get used to you, to its surroundings, or even to both of these things. Limit your interactions, as they get used to you. If a certain behavior has suddenly brought about this behavior, try to limit the behavior in question as much as possible. Patience above all else, as this helps your betta fish to get comfortable with new settings, your hands, or whatever the case may be.

It can also be helpful to understand a little more about betta eyesight, as well.

Start with remembering that bettas are unable to see you as distinctly as you can see them. Beyond the fact that the eyes for humans and bettas are set in different places on the body, bettas tend to see the world in colors, vibrations, and actions from nearby objects or entities. The betta fish is going to do its best to defend itself with respect to these qualities.

In other words, moving as slowly as possible, and giving your betta fish time to adjust to things, are going to be your two best bets for getting them to stop flaring.

Do Bettas Really Flare At Their Reflections?

This is another potential trouble area you want to keep an eye on. Remembering what we said above about how bettas actually see their surroundings, you should be able to see this as a distinct possibility for triggering a flare-up.

Do bettas know when they are looking into their own reflection? The answer unfortunately is NO. If they can see themselves on a regular basis, they will likely respond to the perceived threat by flaring up. As far as they are concerned, another male bettas has just entered their tank.

How to Stop A Betta Flaring Too Much?

If you know for a fact that a reflection is causing the flares, there are a few things you can do. The most useful will likely be to change up the lighting in the room. Moving exterior sources of light from your tank can eliminate the likelihood of the betta fish seeing its reflection on certain sides of the tank.

If you can’t manipulate this lighting, try to move the tank itself. If this doesn’t work either, or is not possible, your next step will be to make some changes to the lights in the aquarium itself. Don’t forget that bettas generally do not like a lot of bright lights.

Now, let’s get deeper into the subject of why constant flare-ups can be highly damaging to your betta fish. To be sure, there are many, many reasons why you don’t want to let this behavior continued unchecked for a prolonged period of time. 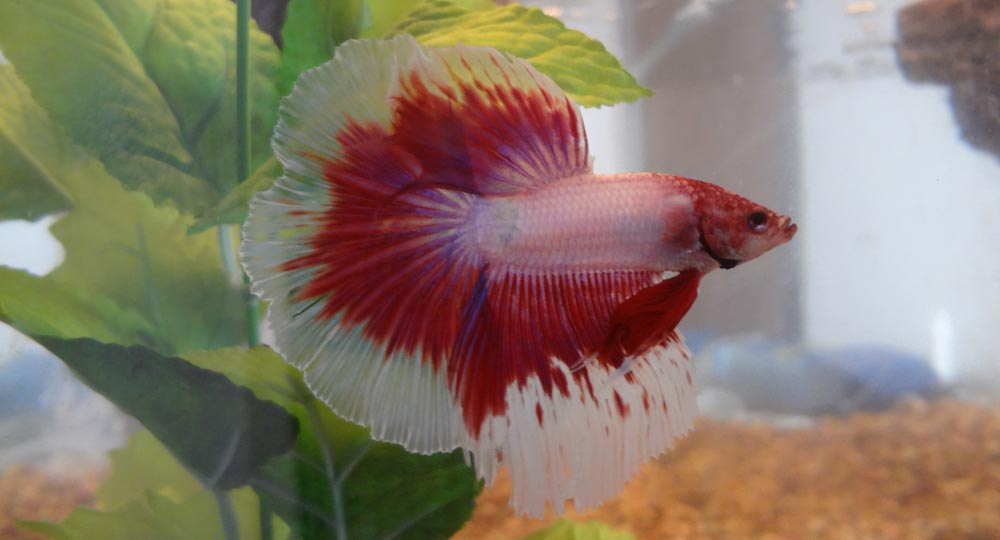 As we mentioned before, flaring up for a few moments each day is not cause for alarm. All that means is that your betta fish is getting in a little exercise. These momentary stretches can also offer you a good opportunity to take a closer look at your bettas fins, gills, and so forth. If you are concerned about fin rot in your betta, or any other condition, use these opportunities to see more of them than you normally would.

Prolonged, consistent flareups can cause damage to your bettas on several levels. This is why you should take steps to remedy the situation as quickly as possible. Since flaring up is a response to a perceived threat, you have to assume that entering such a state is highly stressful to the betta fish. After all, they believe their existence is being threatened or challenged. The emotional stress which induces the flaring up behavior in the first place can take both a physical and emotional toll.

On the physical side of things, it can cause them to become more susceptible to diseases and conditions. This is due to the fact that constant stress can lower a betta’s immunity. They may also decide to stop eating, which can worsen an immune system even further. If the stress stretches un unabated, your betta is going to become extremely sick.

Yes, you can restore a betta to good health again. It just becomes very difficult, once certain conditions have set in. To reiterate an earlier point, you are going to want to deal with the cause of your betta flaring up as soon as you possibly can.

A little flaring is okay for a betta fish. When you get to the point in which this behavior is ongoing, keep in mind all of the suggestions and warning signs we’ve discussed here. A betta flaring for “no reason” is generally something that can be dealt with on your own. As long as you take to heart the importance of addressing the stressor ASAP, you shouldn’t have anything to really worry about.