Rusty Cichlids are a very attractive Mbuna and will definitely bring a special splash of color to your Malawi Cichlid aquarium.

Not only do they have a lavender purple sheen that sets them apart from other Mbunas in the tank, but they are also quite easy-going and peaceful for a Mbuna. This makes them a beginner-friendly option for many aquarists who have just started their journey in the wonderful world of Mbunas!

But for some reason, the once-popular species is not as common in the aquarium trade as it used to be. If you are lucky enough to find one in the LFS, don’t hesitate to pick it up.

As with all Mbuna, Rusty Cichlids do require some special treatment. Below you’ll learn all you need to know about Rusty Cichlid’s care.

The Rusty Cichlid (Iodotropheus sprengerae) is a lovely dwarf Mbuna that comes from Lake Malawi, where it is found in the restricted sediment-free rocky habitat around the islands of Boadzulu, Chinyankwazi, and Chinyamwezi in the south of the lake.

Because of its distinctive coloration, this cichlid is known by common names such as Rusty Cichlid, Lavender Cichlid, or Lavender Mbuna.

This species was described by Oliver & Loiselle in 1972. This fish was one of the most sought-after Mbunas in the middle of the 1990s. Due to the destruction of natural habitats and the impacts of the aquarium trade, it’s currently categorized as “Near Threatened” on the IUCN Red List.

The Mbuna belongs to a small genus Iodotropheus that only has three described species, and Rusty Cichlid is the most widespread in the hobby.

The common names – rusty cichlid and lavender Mbuna do a great job of describing their appearance. The notable rusty coloring can be found on their faces and gradually blending into lustrous deep lavender bodies.

Sexing Rusty Cichlidscan can be a bit tougher than other fish. Both males and females have similar coloration.

Rusty Cichlids are considered dwarf Mbuna. The average size is around 3 to 3.5 inches when fully grown. Some aquarists have been able to grow them a bit larger in captivity, up to 4 inches, but those instances are uncommon.

Despite their small size, Rusty Cichlids have a relatively fast growth rate. You can expect they will reach their sexual maturity at only 1.5 inches in a year.

Again, like any fish, there will be some variance in size and growth rate. The quality of care they receive will play the biggest role in how fast they grow and how large they ultimately get.

In the right conditions, the average Rusty Cichlid Lifespan is between 5 and 8 years in captivity. This lifespan assumes they’re well cared for and not subject to any health problems or diseases.

There are a few things that can impact their lifespan. As with Lake Malawi Cichlids, the specific disease is Malawi bloat which is majorly caused by stress. These fish are also quite susceptible to poor water conditions and lack of oxygenation.

Rusty Cichlids are very hardy and known to be one of the least aggressive Mbunas.

But there are still some basic care needs that you should be aware of to ensure they thrive in your aquarium. No matter how easy they are to take care of, they are still Mbunas that need to be in the right environment to stay healthy and happy.

Below we will go over everything you need to provide them with the best possible habitat.

Most Mbuna aquariums typically require heavy stocked to reduce aggression. The rule that most Mbuna lovers use for dwarf Mbunas is roughly 2 gallons per fish.

We will talk more about this in the tank mates section below.

In the lake, L. sprengerae mainly inhabit shallow rocky shore, where the water is a bit warmer and alkaline. Additionally, Lake Malawi is known for its chemical stability of water which these fish are used to.

Even though L. sprengerae are hardy fish; trying to recreate these water conditions in your aquarium is essential. This will help reduce stress, which can lead to health problems down the road.

Some recommended water parameters you should aim for:

Poor water quality is one of the leading causes of death in Malawi Cichlids. Because of this, you will need to perform weekly water changes of 20% to 50% to keep the water quality in good shape, depending on your bio load.

Also, note that Rift Lake African Cichlids can’t thrive in acidic conditions. If your aquarium’s pH is lower, you will need to take measures to keep it up.

In their natural habitat, Rusty Cichlids often occupy large rocks and slabs as well as the areas where detritus has accumulated.

To mimic this environment in your aquarium, you should use a sandy substrate and add piles of rock to build sturdy structures.

We recommend using crushed coral or aragonite sands as a substrate or dragon stones to create caves to maintain the pH of the water. Personally, I prefer the latter because it’s easier to clean and Mbunas show better colors over a darker substrate.

Rusty Cichlids are omnivorous and aren’t picky when it comes to food.

In the wild, they feed on a variety of insect larvae, crustaceans, and algae with their specialized teeth at the Aufwuchs and plankton.

In captivity, this species eats just about anything offered, but as for other Mbunas, a vegetable matter should make up the majority of their diet.

Some great options for this are Spirulina flakes, cucumber, peas, and romaine lettuce. These fiber-rich food are so vital for Mbuna’s health. 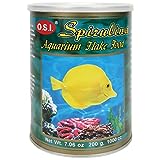 An occasional protein-rich snack like small live and frozen baby brine shrimp, bloodworm, and Daphnia will also give them some variety.

While Rusty Cichlids are considered the least aggressive among the Mbunas, they will show aggression towards their own kind, especially males. So, it’s best to keep them in groups of several females to each male.

They are also the smallest Mbuna and can easily become prey for their larger tank mates, so large Mbunas like P. crabro (bumblebees) should be avoided. In addition, they may get picked by most boisterous and aggressive species from genus Pseudotropheus, Labeotropheus, and Tropheops.

Of course, big and nasty Haps and Peacocks are a big no-no.

In a “most peaceful” Lake Malawi aquarium, the potential tank mates for Rusty Cichlids could be some of the “peaceful” Mbunas, peacocks, and catfish from Lake Tanganyikan.

As far as other species go, some possible Rusty Cichlid tank mates include:

It’s worth noting that every fish has its personality, so even a “peaceful” Yellow Lab can sometimes be a bully. There are no guarantees.

You should give each fish at least two gallons of space in an overcrowded aquarium. Here are many stocking ideas for a 40-gallon Breeder aquarium.

As with most other Mbuna, Iodotropheus sprengerae is a polygamous maternal mouthbrooder, and it’s supposed to be easy to breed in captivity.

If you intend to breed Rusty Cichlids, you should start with a group of at least 6-8 Rusty juveniles in a species-only tank with the same environment we mentioned above to improve the survival rate of fry.

Don’t worry; these fish can reach sexually mature at 1.5 inches within four months.

The male Rusty Cichlid becomes aggressive, and his coloration will intensify when he is ready to spawn.

The male will choose a flat surface as a spawning site where he will excavate a small pit. After that, he will display and quiver all around females until one accepts him. Other fish will be chased away during the spawning phase.

Then both sexes circle each other and perform the ‘T-position’ a number of times until the female lays her eggs. Every time she deposits 1-2 eggs at a time, she immediately turns around and takes them into her mouth.

She will keep the fertilized eggs in her mouth for about 3-4 weeks until they hatch and another week until the fry are free swimming. The fry can be fed with baby shrimp nauplii from the day they free swim.

That’s it for now! I hope you enjoy this Rusty Cichlid care guide.

These fish are beautiful, peaceful, and easy to care for. They are perfect for any Mbuna lovers who want to add some variety to their aquarium.

They are not usually found in local fish stores but are available in many specialist online retailers at a moderate price.

Do you have any Rusty Cichlid care or breeding tips to share? Let me know in the comments below!

Rusty Cichlids are one of the most popular Mbuna in the hobby and are sure to make a beautiful addition to your aquarium.