Bloodworms For Betta Fish: Is It a Good Idea?

As the name implies, this means buying bloodworms who are still alive, moving around. Since you’re feeding your betta fish the bloodworm in its most natural form, you stand to get the best possible range of nutrients. Compelling the betta fish to hunt the bloodworm can also be highly stimulating and beneficial in its own right.

However, buying them isn’t very cost-effective, unless you have several bettas. Furthermore, live also means it could also contain parasites and other undesirables. These things can infect your betta fish. Live bloodworms are obviously best purchased at a store in your area.

Finally, we have frozen. This can be an ideal compromise for those who want to give their betta a good range of benefits, while also being able to store them for a reasonable amount of time. Available in cubes, make sure to follow directions for dosage closely.

Do not simply drop an entire cube of frozen bloodworms into the fish tank! Frozen blood worms can be stored for up to six months, and they should always be defrosted before being served.

Make sure your bettas can get to the food! You also don’t want to leave it in there for too long, particularly with frozen. A nice benefit of freeze-dried bloodworms is that they float to the top of your fish tank, ensuring the betta fish will eat them quickly.

At this point, you should have a pretty good idea of what to look for. The next step is to understand how to administer bloodworms to your betta fish safely and correctly.

How Many Bloodworms Should You Feed Your Betta?

Obviously, since betta fish are carnivores, they’re going to love bloodworms. This, combined with their tendency to just eat and eat, means having to pay close attention to how many bloodworms feed your betta fish.

Bloodworms: A Fine Treat, But NOT A Dietary Staple

To be clear, bloodworms should NOT be a staple of your betta’s diet. This is where some people make a mistake. Don’t feed your betta too many bloodworms! Yes, bloodworms are rich in a variety of nutrients and other essentials.

However, the key word there is “rich.” They are far too rich to be given to your bettas as anything more than an occasional treat. Ideally, you will only want to feed your betta fish bloodworms once or twice a week.

Too much fat and protein can wreak havoc with the health of your bettas. It can cause constipation in bettas, and it can also lead to the common betta fish condition known as swim bladder disease.

Ammonia spikes, in addition to a higher threshold for transmitting disease, can also occur when your bettas consume too many bloodworms.

Finally, overfeeding your bettas bloodworms is just a waste of money. There is a fine line where the benefits of blood worms end, and they become something that is doing your bettas far more harm than good. 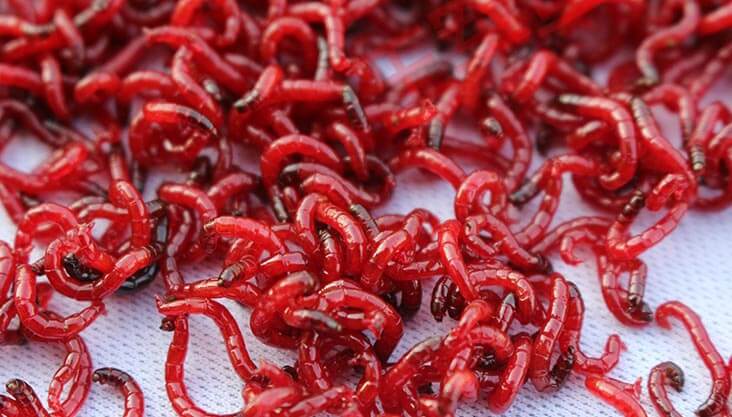 How Often Should You Feed Your Betta Bloodworms?

While betta fish love to eat, remember that their stomachs are not nearly as large as their eyes. Some feed their bettas bloodworms as often as twice a day. This might prove to be fine, but it’s not recommended by most. Again, stick to the once or twice weekly schedule. This is particularly important when introducing bloodworms of any type for the first time.

You also shouldn’t drop an entire bloodworm into the tank. This is similar to our earlier advice regarding how to dispense a cube of bloodworms. In both cases, the bloodworm should be broken down into several smaller pieces. This ensures everything will be eaten.

It also ensures your bettas aren’t going to give themselves any problems from trying to consume a larger-than-comfortable piece of bloodworm. Anything frozen should be broken up and thawed prior to serving.

If frozen, you also want to be sure that you drain the bloodworms carefully, before you put them in the tank to be eaten. The juices that come out during the defrost process can be highly contaminable, when included in the tank with the bloodworms themselves.

If you are opting for frozen bloodworms due to them offering the most ideal balance of nutrients and protection from parasites/bacteria, dumping the defrosted juices in with the bloodworms can completely undo this benefit.

At the end of the day, your best bet for feeding your betta fish bloodworms safely is to remember the following:

As long as you keep these things in mind, combined with the directions we have listed above, you shouldn’t have anything to worry about.

What About Breeding Bloodworms?

Some might suggest breeding your own bloodworms. Potentially, and this is largely dependent upon how many bettas you have, this could prove to be an ideal solution. Breeding gives you a direct source to bloodworms suitable for betta consumption. This can not only save you some time, but it can also save you a good deal of money.

Again, these benefits are largely dependent upon having enough bettas to justify this effort in the first place. If you only own one or two bettas, the work involved in learning how to breed bloodworms for bettas likely won’t be worth it.

Balance and variety are going to be the two most important things your betta will need in its diet. To meet these needs, you’re going to need to research the different types of food betta fish can eat. Live animals are generally considered best, including bloodworms, mosquito larvae, and brine shrimp. Pellets, freeze-dried food, and frozen fish food are all additional possibilities you can explore. You don’t want to limit your betta to just one thing.